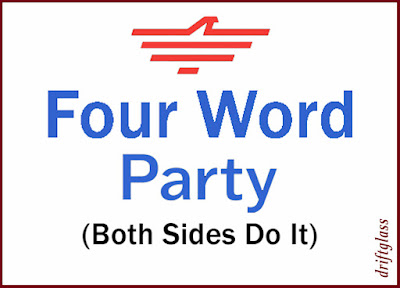 The new party, called Forward and whose creation was first reported by Reuters, will initially be co-chaired by former Democratic presidential candidate Andrew Yang and Christine Todd Whitman, the former Republican governor of New Jersey. They hope the party will become a viable alternative to the Republican and Democratic parties that dominate U.S. politics, founding members told Reuters.

In an interview, Yang said the [Forward Party] will start with a budget of about $5 million. It has donors lined up and a grassroots membership between the three merged groups numbering in the hundreds of thousands.

"We are starting in a very strong financial position. Financial support will not be a problem," Yang said.

And yet less than 48 hours later, having taken no position on any issue and having accomplished absolutely nothing except a massive friendly-media and social media hard sell of their political vaporware, they already have their hands out asking credulous rubes for their hard earned coin.

When you give to #FWD, you're giving to American democracy. We aren't here to line the pockets of politicians or to serve special interests. We are here to build a new party that will restore sanity in politics and put the best people on the ballot. https://t.co/sgZ23Fve3m

We’re building the infrastructure in every state to build the first credible new party in American politics in over a century. And we need your help to succeed. Can we count on you to contribute $10 to our historic effort? #ForwardParty #ForwardTogetherhttps://t.co/sgZ23Fve3m

I foolishly assumed that this latest Third Party grift would shake itself out a little bit first before coming for our purses.  That it would focus group buzzwords for awhile before inevitably settling on some version of the chimeral "True Conservatism" about which I wrote this back in 2018 ("Thrilling Tales of True Conservatism! Vol 24: Where Everybody Knows Your Game"):

The rest of the Mr. [Andrew] Sullivan's "diary" consists of him ranging up and down the history of Western Civilization and claiming that Virtually Every Good Thing That Ever Happened from the Magna Carta to the Tennessee Valley Authority to the Instant Replay is obviously the invisible hand of True Conservatism at work.
Like the Holy Spirit, True Conservatism bloweth where it listeth, and thou hearest the sound thereof, but canst not tell whence it cometh, and whither it goeth. This why the sellers of Unicorn Piss are always be guaranteed a profitable customer base of twitchy Centrists, deluded Independents and gutless Both Siderists, pantingly eager to buy whatever turpentine-and-crushed-up-dollar-store-peppermint sludge they're hawking as God's Own Water of Life this time around.

Because no matter how smooth the con man is and no matter how mesmerizing the patter, sooner or later (in this case, much sooner) --

-- they get to the point.
Money.
Give me your money and this royal throne of kings, this sceptered isle, this earth of majesty, this seat of Mars, this other Eden, demi-paradise, this fortress built by Nature for herself against infection and the hand of war, this little world, this precious stone set in the silver sea, which serves it in the office of a wall or as a moat defensive to a house, against the envy of less happier lands, this blessed plot, this earth, this realm, this Glengarry Highlands shall be yours.
Give me your money and I will help make all your dreams will come true.


I Am The Liberal Media

Jason Isbell
@JasonIsbell
·
Jul 28
Always con artists never just a con craftsman. So much to live up to

Has no appeal?
Perhaps it is not the political parties but the problem resides inside the individual.

If each and every American had his own political party we would be the Tower of Babel party. There would be no one to hand out political party favors to other than yourself.
Theocracy in America will imitate the Middle East who still use religion to rule and like all the political parties mention above, so too are there different religions and separate sects of religion that each carry their own Tenets that oppose the rother competitors.

Instead of forming a new political party. I suggest we try to clean up those that exist. First, ban lobbying with cash. To bribe a representative with money to disavow the will of his constituents for cash to represent the highest bidder. Needs to go.
Whenever an elected official speaks in his/het official capacity. speaking the truth as if he is under oath with a penalty of perjury which removes you from office would be another improvement.
Elected officials responding to voters why they voted against their will and interests because of their, religious beliefs, their strongly held conservative principals is not an excuse to dismiss the will of the people and should be addressed harshly.
Like making a geographical change to start anew. You take your personal baggage with you to your new beginning.

An elected rep[publican can dismiss any constituents concerns simply by invoking his /het closely held religious beliefs he relies on to cast his vote to represent you. He can use fiscal conservatism to vote for his party leadership that was bought by the highest bidder to dismiss representing his constituents and they get away with it as long as the people let them.
To think that the FWD party will be any different with all the corrosive ,corruptive elements existing this would be like the people who followed Jim Jones as someone different so therefore better?

PPhew! I rest my incomplete case.

"This scepter'd isle, this shopper'd aisle, this kipper'd eel, this England! o/` Rule, Britannia! Britannia waives the rules! And Britons e~e~ver shall be cool~ o/`"
-- Archie Tipple aka Deconstructo, a possible Grant Morrison parody from Gerard Jones's c. 1990 run on Justice League Europe (whom Elizabeth Sandifer would be equally justified covering, and not covering, as The Last War in Albion wraps up its third volume with, again quoting Tipple, "all the pulse-pounding thrills of an epistemological debate!")

They might as well call it the “Manifest Destiny Party.” That would really make what’s old new again for the American Aristocracy. And, of course their slogan would be "Manifest Destiny, Hoe."

Justice Alito has a trigger ruling ready for the case if the FWD party is legal.

As soon as he gets the lawsuit case his reefer decision will automatically strike down the right of the FWD party because.