From the Floating Ethics file, longtime readers may be amused by how completely former as ABC News chief political analyst Matthew Dowd reversed every political position he relentlessly championed once he left ABC News and began lobbying his old friend and fellow Bush 2004 re-election campaign crony, Nicolle Wallace, to get him a gig on MSNBC
This is one of Matthew Dowd's tens of thousands of incriminating Tweets that he has since been deleted because he's a coward who gets very upset when people ask him any questions about relentless spreading of the Both Siderist lie during his many years as ABC News' chief political analyst.

And here is Matthew Dowd sounding remarkably similar to your 'umble scrivener back in 2016:

Bill the difference is the republican party has become an existential threat to democracy. The democrats are the only party supporting democracy and freedoms today.

Which in and of itself is deeply weird and hilarious considering that just last year Dowd was still pimping his own Country Over Party "movement":  a "movement" which, even close up under bright lights, you would have to squint very, very hard to distinguish from the Forward Party he is now pooh-poohing ("Matthew Dowd and Third Way Vaporware".)
Then Bill King does the terrible, unforgivable driftglass thing.  He brings receipts: ones that Dowd can't erase from existence because they're in print:

Bill, we are in a moment where the only party capable and willing to stand up for democracy are the Democrats. let's get through this moment, and then after democracy is preserved, talk about third parties

Ah memories! (screen shots of some of The Lost Tweets of Matthew Dowd)

If you read Driftglass then you don't care much for the truth.
— Matthew Dowd (@matthewjdowd) June 23, 2017

Because Mr. King is a party chairman, a fellow Texan and an all-around substantial person who Mr. Dowd may one day wish to work for, and not some nobody blogger from flyover country.
Instead, Dowd immediately pivots away from any discussion of the past.  Any hint that the hellbeast the GOP has become got that way because of people like him, first as a mercenary campaign hit-man exploiting the rage and homophobia of the GOP base to get Dubya re-elected, and later, in his role as as ABC News' chief political analyst. as the loudest and most public advocate of the Both Sides Do It lie.
Instead Dowd gently cautions that Mr. King that we all need to forget how we got here and who said what about stuff. and instead only focus on "today".  On "this moment".  Which, to longtime readers, will all sound very familiar (these are both in direct response to Tweets from me.)

why don't you accept people for where they are in the present?
— Matthew Dowd (@matthewjdowd) August 21, 2016

let the clinton stuff go. Trump is president elect. And let's concentrate on that, and future leaders. Not the past.
— Matthew Dowd (@matthewjdowd) December 23, 2016

And for the unforgivable transgression of remembering the past?  For my impudence? 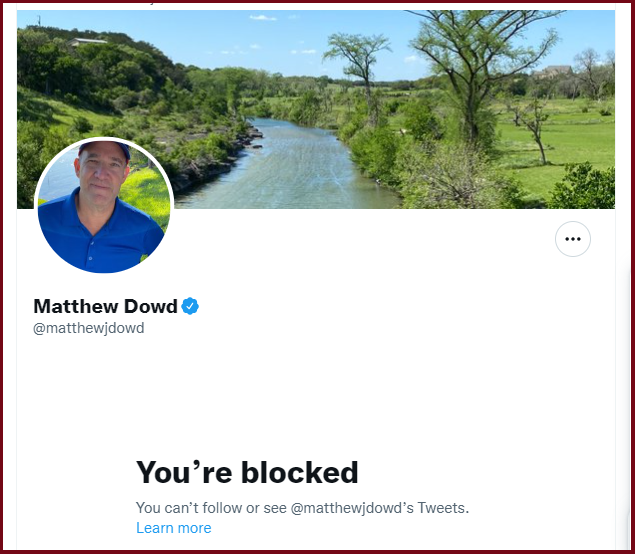 Once again there is no lesson here except how utterly hollow these people are, and how dangerously easy it is to bury the inconvenient past when you and your friends control the cameras.

“not some nobody blogger from flyover country” You’ve used this phrase infinity times and, for me, it never gets old. Always makes me chuckle.

From what I can tell, Victor Orban is already signed to play for the GOP.

Who is left for them to bring that political party star power to compete with the GOP?

As if the independent party doesn't already exist. And awaits all the disenfranchised and delusional right wingers who became independents to live their imaginary political philosophy that doesn't exist in reality.

No matter what happens or what they do to you -- you have never stopped telling the truth. You are one of a kind.

When one has the receipts, one is not invited into their "Big Tent."