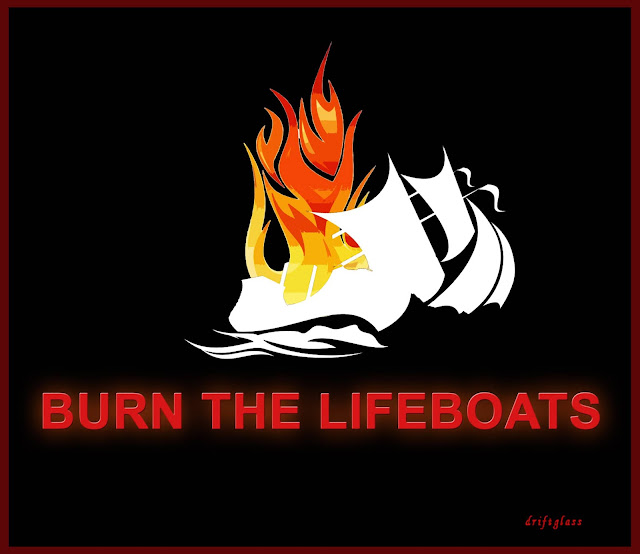 Despite the many laps I have swum in the brackish mire of  boutique, former-Republican, Third Way, "problem solving", "beyond partisanship" scams, I swear I never had any intention of making the dredging of that brackish mire my life's work.  But damn if just trying to figure out which former Republicans are fronting for which boutique Third Way, "problem solving", "beyond partisanship" scams isn't getting increasingly tangled.

For example, last week, before I could leap across the room and mash the Eject!Eject!Eject! button on the remote, Matthew Dowd had showed up on my teevee and made it halfway through a stern lecture which was a perfect, Star Trek Mirror/Mirror episode opposite version (right down to the beard/no-beard!) of Matthew Dowd's very own, standard "Both Sides Do It/Disrupt The K'rupt Duopoly" lecture circa 2014-2017, a typical example of which can be still be found on the ABC News site, Here's a snip:

It is time we reject the messaging from the two major parties, and make choices in our own hearts that help bring the country together. If you don't feel good about either major party choice, then don't be shoved into choosing between what they describe as "the lesser of two evils.”

Make an independent and innovative choice that may not win this year, but over time will be successful in reuniting us as a country. We need independents to take back our country and unite us. It is only a binary choice if we listen to the duopoly.

So how does the now utterly discredited Matthew Dowd still rate a premium seat spouting his political opinions on national teevee ?

Well, according to MSNBC's bio of Mr. Dowd and the chyron that appears under his visage, his only apparent qualification for the gig is that he is the "founder" a "movement" called Country Over Party. 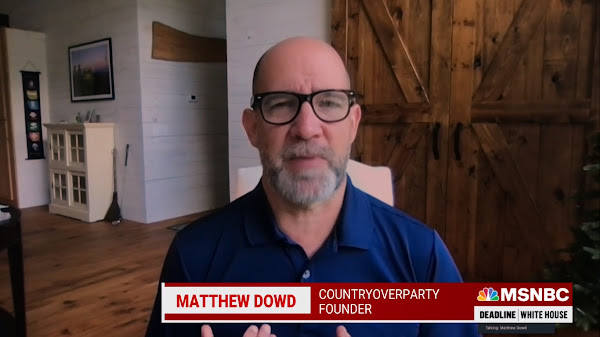 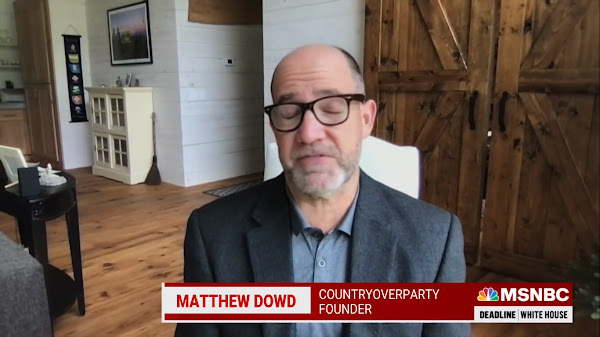 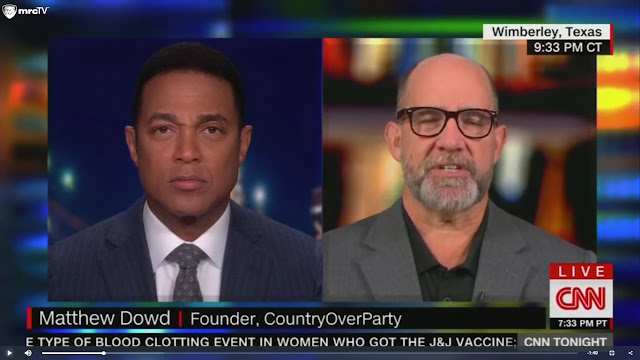 When Yahoo News runs one of his things it also cites him as "Founder of the group ‘Country Over Party’."  and it's also how he self-identifies on Twitter: 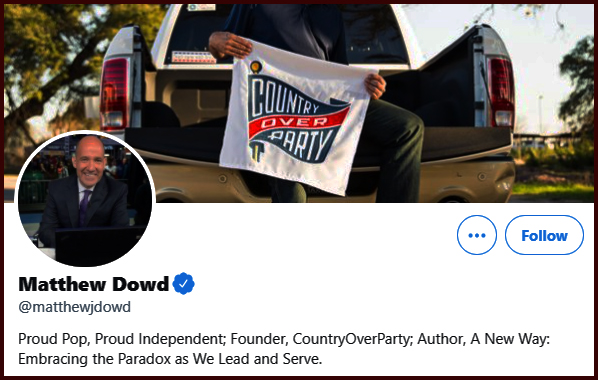 So you would naturally figure, almost without a second thought, that this Country Over Party thing must be an actual  thing, right?

Except its really not.

If you bother to Google the term "Country Over Party" you'll find no "group" or "movement" by that name. There is no fancy "Country Over Party" website.  No podcast.  No radio program.  No YouTube channel.  There's not so much as a stinkin' "Country Over Party" blog, nor is there any mention of or links to any so-named organization or seminar or parade or youth group or pop-up farmer's market exhibition booth or weekly coffee shop meetup any other tangible thing extant in the real world to be found on Mr. Dowd's Wikipedia page.

It is (as we used to say in the business) vaporware.

What one does find when one searches for "Country Over Party" are outfits like "Unite America", which spout all the usual buzzwords:

Unite America is a movement of Democrats, Republicans, and independents working to bridge the growing partisan divide and foster a more representative and functional government.

We’re focused on scaling and accelerating the movement to put voters first, and ensure that the right leaders have the right incentives to solve our country’s greatest problems.

It's home page does announce in Very Big Letters  that it is "Country Over Party" , and it has a bunch of co-founders and board members -- including a number of corporate CEOs, an "Investor Relations VP" and it's very own Ron Christie -- but there is no sign of Matthew Dowd.

-- and about which this blog has already expended enough of our precious adjective reserves.  But no Matthew Dowd.

And there is a Facebook page created in 2012 called "Country Over Party" which is vintage Both Siderist trash where someone, somewhere remembers to posts something about once every 3-6 months.

And that's really about it.

All that Matthew Dowd appears to have "started" was a hashtag --

I started #CountryoverParty four years ago. Glad to see Liz Cheney now a part of the group. pic.twitter.com/VFYfxypMW6

-- which he actually didn't start at all, since it predates any mention by him by several years and many hundreds (thousands?) of people.

Ready to settle for the candidates offered? If not, join us at http://t.co/hPM9cXFP. #CountryOverParty @AmericansElect @BuddyRoemer #TNgop


What Mr. Dowd did do that none of those other hundreds (thousands?)  of people didn't do was use his position as chief political analyst at ABC News to monetized that phrase onto $27 tee-shirts which you can buy at Mr. Dowd's Merch Shoppe, along with his Book That Has Aged Very, Very Badly.

So what have we learned today?
That starting a hashtag (which you didn't really start) is credential enough to win you a seat on cable teevee spouting off about politics.
Which, as the creator of the #DumpsterFire, the #BothSidesDont, the #BurnTheLifeboats and the #MatthewDowdIsAFundemantallyRidiculousPerson hashtags, I find very encouraging.
*In the computer industry, vaporware is "a product, typically computer hardware or software, that is announced to the general public but is late or never actually manufactured nor officially cancelled."

How can I send Mr. Dowd my hard-earned money if he doesn't have a website? Enquiring minds want to know!

He looks like the Six Flags TV ad guy from a few years back. #SixFlagsOverCountryOverParty may still be available Matty?

To be in the Democratic Party you must believe in and advocate for 100% participation of eligible voters.

First before your other issues(s).

Always with the damn facts !

If I am not mistaken

The republicans already have that name/ title. of "Country over party"

They just do not say outload and only speak it in QANON parables.

What country they put over what party.

Putting Russia over the democrats has been decoded from the secret member QANON decoder ring.

For the record. Dowd has never hit above the Mendoza line.

Robt. asks a question that might be asked of the Howdy Dowdy: "What country they put over what party?" Or the old "Where's the beef?" burger commercial about what they are trying to sell.

I bet Howdy Dowdy can't name one freakin' policy of the so called Howdy Dowdy "country over party" party.

They can't even come up with any quality bullshit. Flynn's "that's not me on the screen behind me saying that" bullshit is about the highest grade bullshit they can come up with. I've known 4 year old's who come up with a better excuse for a missing cookie. And these guys (dowd, repulicans, q=whatever non) have absolutely no policy except the racism at the end of their collective noses.

"How Rye Bread May Have Caused the Salem Witch Trials" is the only reason/excuse for the current behavior of +/- 30% of the population of this country.

Yelling into the abyss, for any good it will do.

this is the hard-hitting analysis i visit this blog for.