Thrilling Tales of True Conservatism! Vol 24: Where Everybody Knows Your Game 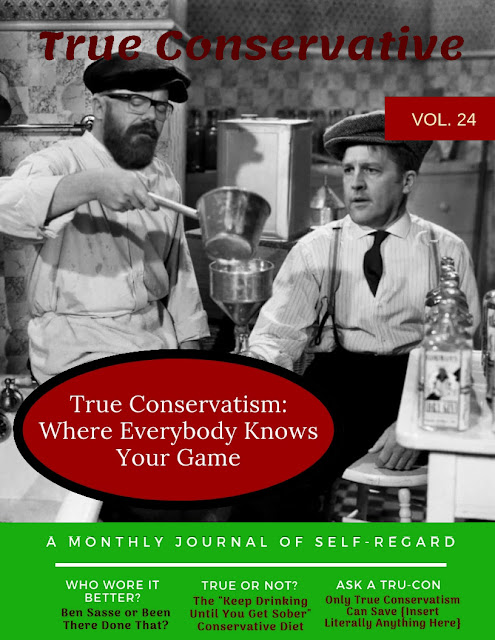 This weekend, Mr. Andrew Sullivan went down to the basement to mix up a batch of every pundit's favorite popskull poteen: True Conservatism.

And queued up right next to the still, with money in-hand and positively shaking with the TCDTs (True Conservative Delirium Tremens) was Senator Ben Sasse:

well worth a read...


True Conservatism (also known as "Pineapple Ice Cream Conservatism"*, as one wag once dubbed it or "Unicorn Piss", as one wag is dubbing it now) is eternal.  No matter what happens -- no matter if the bathtub still where True Conservatives are brewing up their latest iteration of Unicorn Piss explodes, or the entire building burns down, or they invade the wrong country, or nuke the global economy  -- none of that matters to them.  None of it counts.  Because as long as they have a copy of the original recipe and access to basic materials and collaborators in the media, they can always whomp up another batch, anywhere else, at any time.

So, before we plunge headlong into the woozy, boozy world of True Conservatism Unicorn Piss, lets get our facts straight.  From David Leonhardt in the NYT yesterday:

‘Trump Derangement Syndrome’ Is a Myth

And the Democratic Party has not actually become a band of radical leftists.

Conventional wisdom says that the middle is disappearing from American politics: The Republicans have moved far to the right, the Democrats far to the left, and woe to any moderate voters looking for politicians to represent their views.

Well, the conventional wisdom is wrong. The Democrats have not actually become radical leftists, or anything close to it.

You keep hearing this story partly because Republicans have an obvious interest in promoting it and partly because large parts of the news media find it irresistible. It’s a “both side do it” angle that allows us journalists to appear tough, knowing and above the partisan scrum. We love that image. But the facts don’t support the story in this case...

In truth, the facts have never supported the story, so a really obvious first question would be, why has the story persisted?

Well, in the case of Both Siderist and True Conservative pundits, the answer is obvious:  if the Both Siderist lie collapses, so do their careers and reputations. And so, for True Conservatives to pass their Unicorn Piss off as the enlightened middle between the Extremes on Both Sides, all problems must be amputated and rearranged on the bloody scales of false equivalence until they are perfectly divided between the Left and the Right.

In these fetid times, it’s easy to know what you’re against. And I’ve spent many diaries assailing the dueling Trump and “social justice” cults on the illiberal right and left these past several months...

In today’s America, this conservatism is completely under siege. The left will increasingly tolerate nothing that gets in the way of what it calls “social justice,” which far too often reduces individuals to their racial or class or gender identities rather than their merits, or character, or talents...

But conservatism is more deeply besieged by the Republican Party, its alleged harbor. If you consider the themes I’ve emphasized above, it becomes clearer that the GOP is not only not conservative, but actually dedicated to destroying that tradition...

The elite indifference to mass immigration — especially the illegal kind — is an ugly pact between Republican elites, eager for cheap, exploitable labor, and Democratic elites, who cynically encourage it because they think it will give them a reliable voting bloc...

Without a healthy conservatism, liberalism will degenerate. Without liberalism, conservatism has no inheritance to defend. And both rich veins in Western moderation are now under assault from the ideological left and the authoritarian right. We have to brave this pincer attack, conservatives and liberals together, or we will die together...

The rest of the Mr. Sullivan's "diary" consists of him ranging up and down the history of Western Civilization and claiming that Virtually Every Good Thing That Ever Happened from the Magna Carta to the Tennessee Valley Authority to the Instant Replay is obviously the invisible hand of True Conservatism at work.

Like the Holy Spirit, True Conservatism bloweth where it listeth, and thou hearest the sound thereof, but canst not tell whence it cometh, and whither it goeth. This why the sellers of Unicorn Piss are always be guaranteed a profitable customer base of twitchy Centrists, deluded Independents and gutless Both Siderists, pantingly eager to buy whatever turpentine-and-crushed-up-dollar-store-peppermint sludge they're hawking as God's Own Water of Life this time around.

Because, in addition to Eye of Newt, bone of the father, unknowingly given and hemp, according to Mr. Sullivan, here is a partial list of  the unique and glorious virtues you the customer will find in every bottle of True Conservatism.


...abhors war as the ultimate change-maker and disrupter

...it despises concepts of race or gender that eradicate the uniqueness of the individual; it defends high culture against philistinism and mediocrity

...values the particular over the general

...relishes humor in all its forms

...defends art as an apolitical force

...respects religion as a separate avenue for the search for ultimate truth, and a critical component of the civil and moral society that enables government to be small and limited.

...can tackle soaring social and economic inequality as a way to save capitalism, restore the financial sector as an aid to free markets and not their corrupting parasite

...emphatically does not mean resistance to all change. In fact, it understands some change as critical to conservation.

...will end our unending wars

...[will] rid the criminal justice system of its racial blind spots

...[will] defend liberal education and high culture against the barbarians of postmodernism and the well-intentioned toxins of affirmative action

...[will] reform the corruption of religious faith

...[will] protect our physical landscape

...[will] invest in non-carbon energy

...[will] begin at the local level to rebuild community and the spirit of American civil association.


And this is why the fairy tale of the perfect batch of  Unicorn Piss -- which has never existed outside of Mr. Sullivan's ideological dorm room -- persists.

Because, like smoking, sneering at Both Sides and extolling the glories of an Imaginary Center, is the perfect cynical pose for the young and foolish, which quickly becomes the unbreakable addiction of the old and cowardly who no longer dare to form their mouths to say that "The Left has been right about the Right all along".  And the deeper they sink into their Unicorn Piss cups, the more desperately they cling to the fantasy of the an Imaginary True Conservatism is their infinitely versatile answer to every inconvenient question.

It is a gallon jug of All Good Things and No Bad Things that never runs dry.  It pairs well with fish, tofu and gator meat.  It is self-lubricating and water absorbent and water resistant.  It conflicts with nothing except those terrible Extremes on Both Sides.  It's a floor wax.  It's a dessert topping.  It takes the shape of whatever container you pour it into and will solve whatever problem happens to be vexing you at this moment.  It'll grow your hair back, lose you 30 pounds, get you laid like a rock star and runs on sunshine and mindfulness.

At least that's what it says on the label.

On fact, it is an addiction cycle being maintained by pushers who have nothing but to Unicorn Piss left to sell, and users who are terrified of stopping.  A scam that depends entirely selling cowards and quislings a new batch of True Conservatism as the whiz-bang, never-fail, sure-fire cure to -- 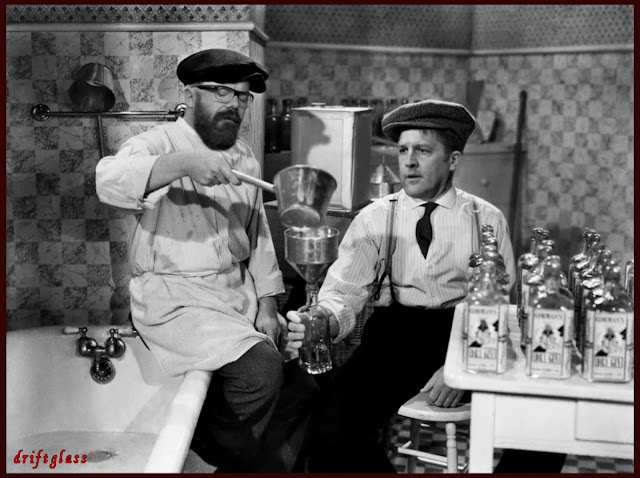 -- the savage hangover from their last True Conservatism bender.


If Mr. Sullivan suddenly developed a taste for pineapple ice cream, within a week he would be penning columns about how "Liking Pineapple Ice Cream" is a cardinal Conservative value because of something something Edmund Burke. If he got sick on bad Thai food, we would suddenly see a spate of columns discussing bad Thai food and how it is something that only extreme Christianists or Left Liberal would ever put in their mouths.

He is, at best, a flighty dilettante with a wealth patron and does not have the slightest fucking clue about how his adopted country works.

Sullivan apparently has no idea what social justice truly means. He still claims to be a devout Catholic, correct? He doesn't realize the Jesus character he claims to adore was a social justice warrior.

I agree with you 99-percent of the time. My only conflict is I welcome some of the few remaining never-Trump Republicans. I love Nicole Wallace and Jennifer Rubin. They are great at poking the twin beasts of the fake president and the GOP. I realize we can't rely on any of them long term, and as you say they'll try to wiggle of of responsibility for aiding the rise of right-wing deplorability, but for now it's all hands on deck in IMHO.

Love your work and always learn something new. Keep up the good fight.

Dude, did you miss this:

The ENTIRE LAST SECTION OF THE COLUMN is both-sides-ing. It has nothing to do with the premise that we need a healthier conservatism.

I'll give him one thing: there hasn't been anything conservative about the conservative movement for years, and thus the whole "conserving of norms and traditions" thing has just been added to Democrats' job description as a sort of side effect of them still possessing human decency.
Otherwise, horse shit, Andrew. Perhaps try reindeer piss instead, as it is for one real, and for two will actually get you high if the reindeer have been fed the correct mushrooms.

It's noteworthy that NYMag hosts both Sullivan and Traister, both of whom write the same columns and offer little in terms of useful insight, and yet are required in order to maintain balance in the debate.

"which far too often reduces individuals to their racial or class or gender identities rather than their merits, or character, or talents..."

This is trolling. He thinks that sentence is clever, the way it's constructed backwards


The tragedy of Sullivan is that if he had only taken the path he could have been perhaps the most awful poet in all of history.

Hope this is not too off topic.
When it comes to Conservatism. Too much of the idealism cannot mathematically add up nor found anywhere to point at as evidence of resolving problems.

It usually comes with lies. Some blunt and nasty while other lies are worded soft and flowery to disguise its folly.

America has some of the greatest comedians that can take an outright lie, even the well worded flowery disguised lies and put them to a story line to make you laugh at them.

Even though these lies are harmful, degrading, ETC..
As they have the Tony, Emmy, awards. It seems to be time to have the Comedians Award for the best joke line of a lie.

* Do you have a favorite Trump lie?
* Which lie of Speaker Ryan is Ryan at his best?
This can have categories;

Political like McConnell. Political relatives like Donny Jr.
Media liars like Alex Jones, Hannity and Rush.
Political paid hack category exampled with Kellyanne to the Coulter.
We can have a category for the GOP citizen base as Joe the Plumber to David Duke the Grand Dragon retiree.
Using their lying breaths, Comedians will be rated by the laughter they induce from the egregious and most ridiculous statements from these conservatives.