Matthew Dowd Wants To Know What You Think!

Let me know what you all think. https://t.co/JnZTgJCkRO

Well, not what you think of course.

And definitely not what I think. 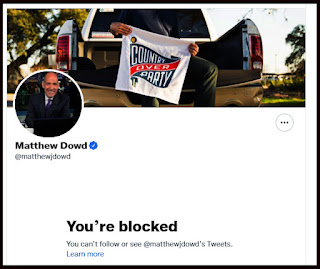 No, based on his pattern of automatically blocking anyone who even lightly brushes up against his very, very inconvenient past --

-- a past he has gone to great lengths to eradicate -- what Mr. Dowd wants isn't feedback. What he wants is fawning praise and validation like this.

I'm not exactly sure what "very high stress situations" Mr. Stevens is referring to here that Mr. Dowd handled with such "grace & great effectiveness".

Was it helming George Bush's utterly despicable 2004 re-election campaign?  A campaign during which Dowd did not hesitate to conflate 9/11 with Saddam Hussein, or the War on Terror generally with the Gay Agenda...because those "anger points" could be relied on to get Republican voters to the polls.

Dowd packaged his vicious tactics as nothing more than the application of basic advertising technique. His slicing and dicing of wedge issues was no such thing, he explained. He was, he said, just creating a new Republican "brand." After Rove executed Dowd's carefully calculated targeting to produce Bush's narrow victory in 2004, Dowd was triumphant. "Issues don't matter in presidential campaigns," he exulted in 2005, "it's your brand values that matter." For Dowd, facts didn't matter either, only "brand" identity.

Or was it all of those toxic, hackish years he spent as the King of Both Siderism while he was ABC News' chief political analyst?

Then again, Mr. Stevens also thinks that Michael Gerson should be elevated to sainthood --

I’ve known @MJGerson since 1999 on Bush campaign. While much of the professional right has done whatever they can to justify staying in power with Trump, @MJGerson has never faltered. True to his values. He & @Peter_Wehner are the best of us. Admire them both so much. https://t.co/nE9fcxTKyR


When even a quick and unjaundiced trip down Memory Lane (a journey which, to Never Trumpers, is like unto a 100 mile firewalk wearing nothing but napalm loafers and butane Underoos) clearly shows that, if Mr. Gerson is destined for anywhere eternal and celestial, it ain't gonna be Elysium.
Excerpted from my very long 2019 post, "The Bonfire of the Sanities":

But since Mr. Gerson is a member of the Can-Never-Be-Fired-No-Matter-How-Fucking-Wrong-They-Are Pundit Guild, amid the voracious flames and suffocating smoke of the Republican's Bonfire of the Sanities, he still feels perfectly at ease writing the umpteenth banal variation of one of his favorite columns:  lecturing the Left and the Right, both alike, for their lack of civility.
...
Which at this point bores me to tears.  Which, I tend believe, is the WaPo's point in continuing to syndicate his drivel.

So really, why waste the pixels?

Instead, this time around, I found it much more personally interesting to use Mr. Gerson's saccharine droppings as a jumping off point to trace the Pecksniffian arc of his intellectual and moral bankruptcy.  Perhaps to get at the larger issue of why in the hell our media consistently fails our democracy so badly.

Our story begins with our nation struggling to dig out from the wreckage that the Dubya Administration left behind.  A failed and despicable administration -- the worst in American history until the rise of Donald Trump -- in which Michael Gerson, a deeply Conservative Catholic, served with unswerving loyalty, and to which he owes his position in the Can-Never-Be-Fired-No-Matter-How-Fucking-Wrong-They-Are Pundit Guild.

And from the very beginning, Mr. Gerson clearly loathed and resented Barack Obama and did not hesitate to use his Washington Post column to say so.  Which is no surprise.  Gerson is first, last, and always a Republican -- a Republican who, in 2008, stood in front of the dumpster fire that was the Dubya Administration doing what all Republicans were doing at the time: trying frantically to change the subject by lobbing anything they could at the Democrats who were running for the honor of cleaning up their fucking mess.

So Mr. Smoking Gun/Mushroom Cloud had no compunction about attacking the character of candidate Obama. According to Gerson,  Barack Obama was so "rootless, reactive and panicky" that he picked Joe Fucking Biden as his running mate.  I mean, how foolish was that, right?
...

Obama was a lightweight who had destroying his sterling reputation by daring to run a campaign for political office.
...

And his "cool, aloof manner and his patronizing comments about the bitter and religious" would surely redound to the benefit of Sarah Palin, who was a lot like Jebus when you think about it!
...

In case you don't speak weasel-tongue, "cool, aloof manner and his patronizing" is Conservative pundit for "uppity"...

This is why the infrastructure project which all Never Trumpers care about most deeply is the elimination of every last mile of that awful, reproachful Memory Lane -- the demolition of its every on-ramp and scenic overlook -- to make way for another big, ol' Beltway media carnival carousel.
A carousel that creates the illusion of forward motion by whizzing you dizzyingly around and around and around but never actually takes you anywhere except right back to where you started.

Your writing is stupendous and this post is a prime example.

So THAT'S what the whole destruction of evidence, I mean Twitter history was all about.

Basically Matthew wants to use the line, "he wants to know what we think" as a platform to niche his way into the media.

For as long as he has been in the media arena, if he doesn't have any notion of where Americans are on most issues. There is no help I can offer.

No matter what we think, I am sure he is going to tell us what he thinks.
(if you call what he does, thinking).

As for the Dowd, the universe in which he resides does not have the words grace, effectiveness, courage or cares in it.