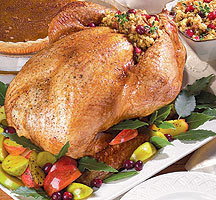 Plus, today only, for our fellow veterans of Thee Olde Days, the late Steve Gilliard's very own receipt for Beer-Can Turkey.
Enjoy, bon appetit and Fuck the Fucking Yankees!

There are a hundred debates about what makes a great Turkey, brining, frying, injecting.

Well, this is the place to debate the great turkey issues of the day.

Um, you just shared a remarkable description of a process that I would have never attempted witgout your post printed out and taped to the refrigerator, the patio door, and my last will and testament.

"There are a hundred debates about what makes a great Turkey"

That's because, and let's face the ugly truth here, there is no such thing as a great turkey, only a minimally edible one. The great New York Times food critic Calvin Trillin was so right when he said, decades ago, that turkey should be replaced as the official Thanksgiving meal with Fettuccini Carbonara.

I'm one of those rare folks who both cooks well (did it for my living for a decade) and really likes turkey. I blame it on my dad, who really loved to hunt geese and was an excellent shot, meaning that most holidays when I was a kid, we ate one of the blasted things. Now, my mother did learn to cook them so that they were at least edible, but when we had a turkey instead (or in addition to, my brother and I could eat as much as they cooked) I always liked it better.
This year we had a lasagna, and it was glorious.
There is a certain validation of one's identity that you can only get by making something and having it there as the indisputable artifact of your worth. You ever wonder where the condescension emanating from rednecks comes from, that's a big part of it. I learned machining, welding, and metal fabrication in high school (I'm hella old) so I got a big dose of that early on, and it does help me to understand certain things about certain people...
Thank you for the Thanksgiving podcast, and I hope it went well for you.