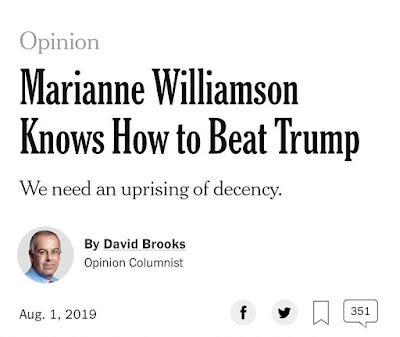 The prose stylings of Mr. David Brooks of The New York Times only has three gears.

First Gear: Immediately before the GOP destroys everything it touches, everything is fine and the Republican Party in now all awesome and Centristy and has nuthin' but blue skies ahead:

"The big Republican accomplishment is that they have detoxified their brand. Four years ago they seemed scary and extreme to a lot of people. They no longer seem that way. The wins in purple states like North Carolina, Iowa and Colorado are clear indications that the party can at least gain a hearing among swing voters. And if the G.O.P. presents a reasonable candidate (and this year’s crop was very good), then Republicans can win anywhere. I think we’ve left the Sarah Palin phase and entered the Tom Cotton phase."  -- David Brooks, November 5, 2014.

Second Gear: While the GOP is in the process of destroying everything it touches, Both Sides are to clearly blame and very likely the only solution is a Centrist Third Party tailored to Brooks' specifications.  Brooks from 16 years ago:

The flamers in the established parties tell themselves that their enemies are so vicious they have to be vicious too. They rationalize their behavior by insisting that circumstances have forced them to shelve their integrity for the good of the country. They imagine that once they have achieved victory through pulverizing rhetoric they will return to the moderate and nuanced sensibilities they think they still possess.


But the experience of DeLay and the net-root DeLays in the Democratic Party amply demonstrates that means determine ends. Hyper-partisans may have started with subtle beliefs, but their beliefs led them to partisanship and their partisanship led to malice and malice made them extremist, and pretty soon they were no longer the same people.


The McCain-Lieberman Party counters with constant reminders that country comes before party, that in politics a little passion energizes but unmarshaled passion corrupts, and that more people want to vote for civility than for venom...

Third Gear:  After the smoke as cleared from the latest round of wanton Republican destruction, it is obvious to Mr. Brooks that Democrats are exclusively responsible for cleaning up the toxic rubble the GOP has left behind, but only by moving significantly to the Right and using only Centrist feel-good methods which Mr. Brooks approves of.

Because according to Mr. Brooks, Republicans have no agency at all.  No responsibility for their own actions and decisions whatsoever.

Which brings us to the foul bit of business Mr. David Brooks extruded into the pages of The New York Times today.

Trumpists tell themselves that America is being threatened by a radical left putsch that is out to take over the government and undermine the culture. The core challenge now is to show by word and deed that this is a gross exaggeration. https://t.co/QoVt9sksm4

Yes, sadly, the coastal elites have ruined everything once again by not stopping to consider the delicate fee fees of the howling, Fuck Your Feeling goobers who supported Trump in 2016, supported him in even greater numbers in 2020 after he yanked the mask off the GOP and showed the world its black, fascist heart, and have stayed loyal to him through his lethal COVID fuckery, his limitless sadism, the endless lying,  the unparalleled corruption of his entire administration, two impeachment and a violent insurrection.

You would think that those of us in the anti-Trump camp would have at one point stepped back and asked some elemental questions: What are we trying to achieve? Who is the core audience here? Which strategies have worked, and which have not?

If those questions were asked, the straightforward conclusion would be that most of what we are doing is not working. The next conclusion might be that there’s a lot of self-indulgence here. We’re doing things that help those of us in the anti-Trump world bond with one another and that help people in the Trump world bond with one another. We’re locking in the political structures that benefit Trump.

And in support of his thesis, Brooks did extensive polling.

Well, not extensive extensive.  For example, Brooks didn't talk to any of the people whose lives Trump has ruined.  Any women who have been robbed of their constitutional rights by Trump judges.  Any of African Americans from whom the right to vote is being systematically stripped away by Trump stooges.

Brooks also didn't talk to any of Darren Bailey's rabidly pro-Trump supporters who agree with Bailey that abortion is worse than the Holocaust.  Nor did Brooks talk to any of the members of the Anti-Defamation League Midwest or the Springfield Jewish Federation or the President Emeritus of the Illinois Holocaust Museum & Education Center or any of many, many other  organization who find such views horrendous.

In fact,  Brooks' extensive research on this subject consisted of talking to...one guy.  One anonymous guy :

This week, I talked with a Republican who was incensed by Biden’s approach. He is an 82-year-old émigré from Russia who is thinking of supporting Ron DeSantis in the 2024 primaries because he has less baggage. His parents were killed by the Nazis in World War II. “And now Biden’s calling me a fascist?!” he fumed.

No word on whether or not this particular MAGA émigré used to be Tom Friedman's on-call cab driver.

And so, having gazed deeply into two navels -- his own and that of some old MAGA goof -- Brooks shifts for the umpteenth time to his third gear.  this is all some kind of merry mix-up.

-- which can only be remedied unilaterally by you and I by continuing to move Rightward and plead with the MAGA mob for peace and civility...

...until they stab us in the back for the last time and plant their Trump Flag once and for all on the grave of American democracy.

And my answer remains the same as it always has been and will always be until the end of time.

It was called the Obama Administration.

Eight years of compromise and olive branches offered to the GOP, which Mr. David Brooks constantly complained was never enough.

Then they elected the King of the Birthers, which Mr. David Brooks boldly predicted was impossible.

Did Brooks correct the 82-year old fart, that Biden didn't not say the Republican Party was fascist? Ha! Just kidding.

I would pay money -- no, I would part with my left kidney* -- to see the livestream of DFB being extraordinarily rendered to the Shadow Gallery where you, or Hugo Weaving in full Guy Fawkes soup and fish, or somebody read this post, and everything else you've had to say about him over the years, while he was strapped into a chair like that Ludovico veshch, unable to escape, forced to confront his own words.

* A German practitioner of Technological Medicine once assured my homeslice Leif the Unlucky that "The human body is filled up vit unecessitated parts. You can get by vit one kidney."

It's pretty clear from said 82 year old fart's opinion that despite supposedly hating Trump, he still gets all of his information from Fox News. Where else would he have gotten the idea that Biden called all Republicans fascists? Definitely not from actually LISTENING to the speech...

It is a well known and proven fact that people, (who are capable of learning), People learn more life enhancing information from watching reruns of the 3 Stooges.

Come away with more life helping factoids an from opinions and exercising provoked ideas from the 3 Stooges than is possible for reading DFB's opinion columns or books.

Not even his TV interviews and offered opinions there have any applied practical life use other than, in a choice, To identify,
NOt THAT.