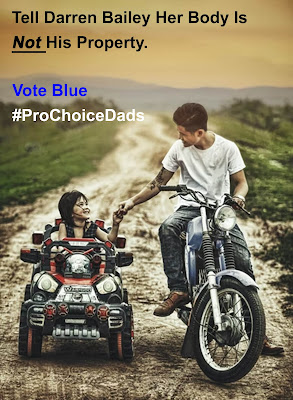 You all remember Darren Bailey, right?   Far-right crackpot Republican politician who is currently serving in the Illinois Senate for the 55th district and is also the Illinois Republican party's nominee for governor.
Last week we brought you the news that:

This week I am here to faithfully report that Darren Bailey has still not learned the First Rule of Stupid Holes:  If you find yourself in the Stupid Hole, put down the Stupid Shovel and shut your Stupid Gob while your staff scrambles to clean up your mess.
From the redoubtable Rich Miller:

Darren Bailey: “The Jewish rabbis, they said, ‘No, you’re actually right’” to compare abortion to the Holocaust

Except no, they didn't.
Well, let's take a step back.  No one, including the Bailey campaign, has any idea who "The Jewish rabbis" are, but pretty much everyone -- including leaders of his own party -- are lining up to denounce him:

Over the weekend, Burr Ridge Mayor Gary Grasso became the latest Republican to join the chorus of voices condemning Bailey: “Republicans who think they can get elected in November on their own merit must decide whether to distance themselves from and disavow the albatross at the top of the ticket.”

Mayor Grasso’s comments follow State Representative Steve Reick’s staunch criticism that, “Darren Bailey has crossed a line, a line which you just do not cross.” Even House Minority Leader Jim Durkin rebuked Bailey and stated that,“the Holocaust was one of the worst atrocities in the history of humankind and any comments that minimize it have no place in our political discourse.”

This is followed by a very long (and growing) list of prominent Illinois humans and institutions condemning Bailey for being exactly the kind of lumpen bigoted asshat that GOP base voters love.  The list includes the Anti-Defamation League Midwest, the Springfield Jewish Federation and the President Emeritus of the Illinois Holocaust Museum & Education Center and goes on and on and on.
Good job, Rich!
As I mentioned last week, if you're looking for the real experts on what the Republican party actually looks like under the mask, you never needed to look any further than those of us who live out here among them in flyover country.
We don't have to run polls and focus groups to figure out what these mopes are really thinking.
All we've ever had to do is keep our ears open when we're at the grocery store or at the bar or in the church parlor or at a city council meeting.
Because brothers and sisters, they are not shy about it.
I Am The Liberal Media

Hmm maybe JB knew what he was doing when he gave the DGA a couple of million dollars to run ads about Bailey.

The "Darren Bailey" jokes come prepackaged with their own punchlines? Bailey's the guy who tells the same joke twice and laughs at it both times--and the jokes ain't ever funny. No sir--not funny at all.

They keep saying the quiet part out loud.

Have you noticed by any chance how the media (in all) want us all to be very concerned and scared enough to allow Trump to be above the law over the casual warrant carried out at what once was the BEAUTIFUL Mar A Lago, until the Feds vandalized it?
That Trump's Jan 6 Capital tourists are very angry and are feeling defiled as if they were raped and forced to carry the child to term. Because there home was breached when Trump's golf course is breached.
Be afraid, lots of Russian bots are on line frothing the zombies into a hunger frenzy.

After 9/11 bush signed FISA into law to be able to spy on anyone they wish . They told us "if we have nothing to hide, then we have nothing tp worry about over our privacy.
But it was our privacy they were sure the law covered and congress (republicans) were sure their privacy would not be infringed.
Hence Kevin McCarthy months earlier threatening the Telecoms over providing his communications and now threatening the FBI and the Justice Dept. .