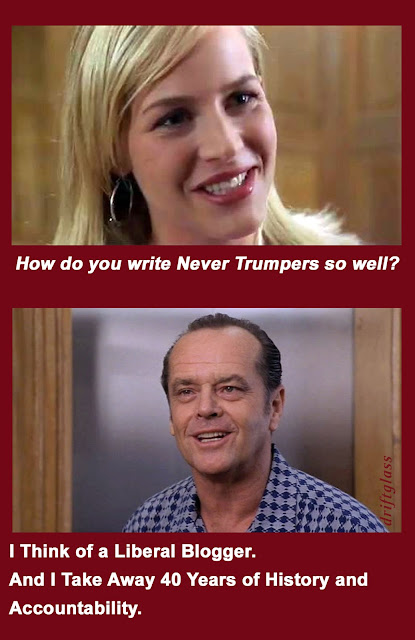 Charlie Sykes really, really, really hates it when ungrateful guttersnipe Liberals refuse to STFU and do as we're told and instead go around promiscuously remembering stuff.

I'm sure the Alert Reader noticed long ago how it is never a Never Trumper's duty to STFU and do what Dems tell them to do, but only ever the other way around.

And yet, it wasn't us Liberals who built the GOP monster machine that birthed Trump.  It was all these recently-former Republicans who did that.  Just as it was these same  recently-former Republicans who shrugged off as alarmist Liberal crackpottery every god damn warning that their party was headed into the shitter until it was far, far too late.

So where do these always-wrong-about-everything mopes get the nerve at this late date to bark orders at those of us who were actually right about the Right all along?

Who died and made these mopes the Shot Callers of Democracy?

(That was rhetorical.  It was was the Beltway media.)

Mopes and Shot Caller of Democracy.

>>> Who died and made these mopes the Shot Callers of Democracy?

(That was rhetorical. It was was the Beltway media.)

I mean, you're not wrong, but I must add that quite a few liberal folks I run into online are quite ready to praise and lionize Liz Cheney.

It's exhausting. I still post occasionally to say, "You know, this is not a good or trustworthy person," but I don't expect many to listen.

It gets pretty confusing for the conservative mind to differentiate between enemies.
Enemy of my enemy, Enemy of my enemy pal, enemy of my friend, My friend the enemy and my political ally enemy.

When everyone is your enemy, you have no allies or friends.
Even your family. As an Arizona sate legislator made her 2nd Amendment statement over red flag laws.

That is correct. To protect her loved ones she will shoot them dead as her enemy.
Which gives us a clear definition of Pro'life.

If she will shoot her grandchildren to death to protect them, what might she legislate on your behalf?

Once the J6 committee is finished, she must be stopped. Even if she were a reasonable and honorable choice for POTUS, the gig she is so very obviously trying to trade up for, (and she is most assuredly not) she would still appoint a a government full of goddamn Republicans, and her choices likely wouldn't be as incompetent at buggering the government to death as Fergus' picks were.
Let her take her well deserved chunk of history and go fuck herself, she's only where she is because every other goddamn Republican is too fucking corrupt and evil to do what she is doing right now: the least any honest person would do.

I want to see if I can get Charlie Ss'ai-k'ss* to block me by tweeting this as a reply to the quoted tweet. May I please?

* The right people will get this.

Neo Tuxedo,
Knock yourself out.

"Who died and made these mopes the Shot Callers of Democracy?
(That was rhetorical. It was was the Beltway media.)"

Slightly on-topic...I'm tired of getting this shit from all sides all over the place. I almost watched Judy Woodruff "interview" Henry Kissinger this eve and my better half had to turn the channel before I threw anything, but only after I started yelling at the teevee like HST. I mean WTF, that fkin war criminal can't even leave the US for fear of being hustled off to the Hague and he's still got a new book to shill and PBS is willingly bringing him on as if he's got anything cogent to say about...what, exactly? What can he speak to? Devising a strategy of illegally bombing citizen populations in SE Asia? Devising a strategy of kneecapping emerging democracies in SA? Yeah, I didn't watch the interview. But WTF should I, and WTF does PBS bring on bloodstained ghouls like Kissinger? How tone-deaf do you have to be? Will the same niceties be afforded to Mitch McConnell in 20 years? (more rhetorical, that one's on me)

PBS as constructed in the beginning was killed by the George the lessor in the Chaney administrations march to "privatize" the entire United States Government. And the privatization of PBS brought in all the Corporate Money to make PBS awash in republican politicians and a constant stream of conservative opinionators that make it impossible to watch anymore. Of course this was the second act/movement after Regan killed the Fairness Doctrine.

I keep waiting for someone to ask any of these "Suddenly concerned for the Democratic Republic" Republicans what they had been doing for the last 50 freaking years. And all the impeachable crimes the Republican Party engaged in and their response was "Oh, we can't indite anyone, its for the good of the country, don't you know."

Liz Chaney is not, I repeat, not our friend. And never will be, as the spawn of "If I shoot you, you must apologize to me" Dick Chaney"

If anyone requires a specific instance of Liz Cheney's position on anything. Look to her family values derided from religion and her personal beliefs and who is not expendable for her personal gain of power.

How she trashes her own sister. I mean she grew up together and probably knew her sister was a Lez and not a Luz when her sister came to know it.
Pro life my ass, that sister came from Liz's parents . Had the same well off environments as Liz and her sister.
In Liz's mind. Her sister is not a full human being and should not have those inalienable rights.

Her own party does not want her, she could never fit in the Dem party. The independents don;t care to have her. Liz was purged from her party because she explores the truth and facts. Will not lie and cover up for Trump.

She may think her party left her as so many republicans reason away with excuses. The fact is , the purge continues with Trump/ MAGA and Putin's mafia are doing the purging.

The day will come where you Marge Green and Boberts and Jordan will face the purge. It is inevitable for which they stand.
It is laughable as I read in my local paper of someone promoting a GOP congressman for reelection stating that he has been Bipartisan. (he has not) But that would make him a RINO. A Biden-Bot. We see how the purge deals with T=RINOS..........

Have we gotten to the point where the clarifying of a "complaint" A disagreement from someone must be pre defined as legitimate or just bloviating personal imagined hate?

Like Catholic American Bishops to refuse Biden and Pelosi communion for their views on abortion (that does not appear in the Bible and Jesus did not speak of it)..

But Not bearing false witness as one of the commandments of God that is in the Bible. Is ignored and dismissed as sin.
Hannity is Catholic and it is reported FOX's Laura INgraham was converted to Catholicism.

They bear false witness 5 days a weak on TV and off air through the weekend.
Never once have I heard a Catholic Bishop call for refusing communion because they break God's commandment all week ling every week and more than twice on Sunday.
Sure conges sin is to relive their guilt of sin to redeem themselves for the future. Yet when their is no redeeming or atoning and the sins repeated over and over with no remorse.
Why do the Bishops give them communion?