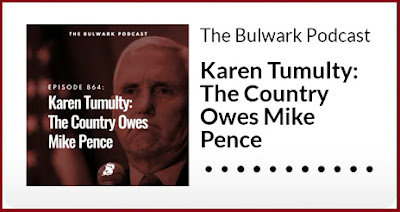 You know that tiny rump battalion of recently-former Republicans that has successfully colonized cable news over the past few years?  Well almost all of them are so desperate to pretend that the labors of their entire adult lives weren't all for nothing -- so desperate to pretend that among the thousands of elites and an opinion-makers of Party of Personal Responsibility that they once counted as friends and allies, there are more than a tiny handful of democracy-defending public servants -- that they are willing to rehabilitate the reputation almost any of the dregs of the GOP on the most laughably flimsy basis.

For example, there is the ongoing, half-assed attempt to raise at lease 1.5 cheers for Mike Pence:

Everything would be different if Mike Pence had not counted the votes. He showed courage and faced real potential physical danger. Plus, Biden on Kimmel, Jared & Ivanka’s reputation laundering, and Abbott’s flip-flop on guns. ⁦@ktumulty⁩ joins me… https://t.co/sCtt5ODj2w

Larry Kudlow asks Mike Pence if he's ever seen a president say as many falsehoods as Biden. Pence says "never in my lifetime." Not a single shred of self-awareness between these two guys. pic.twitter.com/lqf9SLlCSa

Happily at least one recently-former Republican is honest and clear-eyed about who Mike Pence is and who has has always been:

If Mike Pence is going to be praised for not stealing an election, I’d like to get some acknowledgement that I drove by 11 banks today and didn’t rob a single one.

If anyone can point to a single moment in Pence’s life that indicates he wouldn’t have gone along with coup if he thought it would work, please do. This is man who spent his life proclaiming “family values” & said yes to guy who talked in public about having sex with his daughter https://t.co/5jo2m6SN25

If Mike Pence is going to be praised for not stealing an election, I’d like to get some acknowledgement that I drove by 11 banks today and didn’t rob a single one.

Mike Pence was entrusted with the power of the VP. That power is not different for a D or an R.

The oath is the same to the same constitution.

Until the Former VP testifies and gives you his cover up of Trump and his republican colleagues indulging in crimes. To all various degrees. The weakness of a orange guy flopping out demands of known ilea gal activity.

He is the president, he is threatening and may take vengeful actions at me, he is my party guy. I am included in his Tree House and that comes first priority over the constitution and rule and ethics of law.
There is no defend the constitution Tree House club for them to be proud members of because they have no morals, ethics, honor. They only have excuses for there Tree house gang to rule and prosper.

Mike Pence sought from 11/03 to 01/05 one honest man who would tell him 'do it Mike' Pence was in on the Coup and would have gleefully traipsed up dem gallows praising trump.