Rusty Bowers and the Doomsday Machine 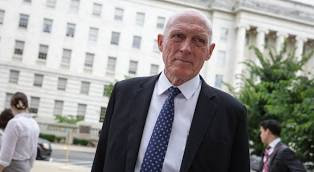 Yesterday's January 6th committee hearing featured the testimony of ordinary, dedicated public servants who were going about their jobs of making sure the 2020 election was conducted freely and fairly and for that they were subjected to a continuous onslaught of verbal and physical intimidation and threats by the Trump mob.

It was terribly moving and, at times, hard to watch.

One of the key witnesses was from the Speaker of the Arizona House of Representatives, Russell "Rusty" Bowers, about whom I tweeted, "If there are still persuadable people anywhere out there, Russell Bowers' testimony would have moved them."

Bowers was one of five recipients of this year’s John F. Kennedy Profile in Courage award for his refusal to consider overturning the 2020 election results despite pressure from Trump and his supporters.

But while Bowers said the efforts by Giuliani and other Trump backers have been hurtful, he does not levy any criticism on Trump directly and would support him if he were on the ballot.

“If he is the nominee, if he was up against Biden, I’d vote for him again,” Bowers said. “Simply because what he did the first time, before COVID, was so good for the county. In my view it was great.”

And despite all the damning testimony Bill "Bullshit" Barr unloaded on Trump during his 1/6 depositions -- despite trying to cash in on all that shit talk by writing an entire shitty book slagging Trump -- this (from the Rolling Stone):

This has been your (and my) periodic reminder that, however tempting is might be to our empathic, forgiving Liberal hearts to keep pawing through the Republican midden pile looking for a pony, it's really nothing but reprogrammable meatbags all the way down.

That for decades, while the establishment media masturbated itself blind in their Platonic Both Siderist Cave, the GOP has been worked diligently to create an unstoppable Gingrich/Limbaugh political Doomsday Machine.

A Doomsday Machine that could not be reasoned with or bargained with.

A Doomsday Machine with no "off" switch.

How can we burn the lifeboats?

(Sound of head hitting desk again.) These fu*king people. We're going to need a starship reactor to blow the innards of that Doomsday Machine out of every orifice. My fear is the J6 committee ends up being the Shuttlecraft with Merrick Garland at the controls.

The latest stupidity for me, thanks to years of reading Driftglass, are the poli sci professors and scholars (Ruth Ben Ghiat is one) being quoted recently that this crisis requires Republican leaders to step up to the microphone and publicly condemn the rising political violence. The future viability of our republic depends on Republican leaders to do the right thing. Do these people even hear themselves?

Me? I think we should try prison sentences first.

...what he did the first time, before COVID, was so good for the count[r]y."

I repeat: "HE" DIDN'T "DO" ANYTHING. For ANYONE. Certainly not "for the country."

Reminds me of the comment that GWB "kept us safe" EXCEPT FOR THAT ONE FCKING TIME ON 9-11-01. That's a pretty big fcking mulligan.

Good ole Rusty, Needed his God to not break the law and cheat for Trump.

Who did good Ole Rusty alert? The public, the state legislature, State AG?
No Rudy had no evidence but had plenty of fraud accusations.

":Just do it and let the courts sort it out", Rudy said.

Ole Rusty thought no evidence and all accusations might have been a Rudy gaff? Really?
Was it that little devil on his left shoulder shouting in his ear or the angel on his right shoulder giving Rudy the benefit of the daunt it being a gaff?

If I recall, Ole Rusty did vote for and commit to the Cyber-NINHAS using tax dollars to campaign and promote the Big Ole Lie.
None of it prevented Ole Rusty from imposing new election hoops for Democrats to hop through.

I am inching ever-so-slightly closer to "burn it all to the F%$king ground"...

Look, it is now burned into the republican identity that Party comes before self.

This is why Rusty would vote for trump a thousand times despite what he went through. This is why Steve Scalise, after getting shot by a lunatic with an AR15 and seriously wounded, requiring multiple surgeries still will never support meaningful gun control laws.

They've moved on from the old 'bad things don't exist until they happen to me or mine' part to the absolute nihilism they display now.

“If he is the nominee, if he was up against Biden, I’d vote for him again,” Bowers said. “Simply because what he did the first time, before COVID, was so good for the county. In my view it was great.”

Ask any trumpanzee to name one specific thing he did that was good and then wait for the blank stare and stammering.

MAGA= tax cuts for the rich and deregulate industries. Only things they did for 3 years before pandemic. Most of those tax cuts are still in place and most of the regulations are still gone, but somehow Biden made in ungreat again.

If you got a better term, feel free to use it.

They are all trying to save themselves from the sinking ship, but in the end there is no such thing as an honest Republican. No matter what they say, when it comes to action, they are going to be doing everything they can to keep the Republican fascist machine marching on.

lol yeah. But they are losing to Obammy. Ha!