To understand the real significance of this above-the-fold headline story in todays State Journal-Register you really have to read it from back-to-front.  Because this is not just about why this particular group of Republican mopes and dregs have chosen to pay an unhinged Hitler-sympathizer and batshit conspiracy PEZ-dispenser like Candace Owens to keynote their 117th annual Lincoln Day Dinner.

This is about the fact that the entire Republican party is utterly (to borrow a phrase from the late Hunter Thompson) decadent and depraved all the way down to the local level, and how the cowardice and ruthless opportunism that is hardwired into the party means there is no longer any way out of the doom-loop they have locked themselves into.

First it's important to understand why this annual dinner exists at all.  And for that we start near the end of the(pay-walled) article:

[Sangamon County Board chairman Andy] Van Meter said the goal of the Lincoln Day Dinner is to raise money. Owens, he said, “is a personality and her personality helps sell tickets. … I realize that some of her tweets are out there.”

This is about money.

Specifically this is about raising money for local Republican candidates, especially for down-ballot races like state representative, county circuit clerk and so forth where the party builds its bench.  And to raise money for local Republican candidates, you have to bring in someone that local Republicans want to cheer for.  And right now, local party officials believe that giving an unhinged Hitler-sympathizer and batshit conspiracy PEZ-dispenser like Candace Owens a microphone and putting her in the spotlight for one of their most high-profile annual fundraising events will raise money.

And they're right.  There'll be the basic ticket price, which will gross them $150K --

About 1,500 people are expected to attend the $100-a-person, sold-out event at the Bank of Springfield Center.

-- and there are the sponsorships and photo-op fees-- 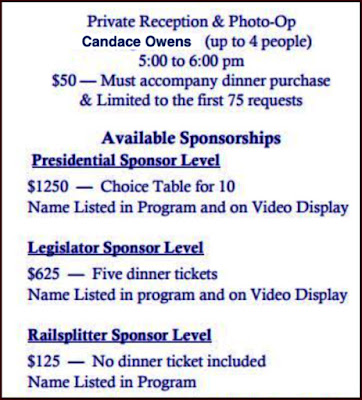 -- and, of course, there is the informal process of putting the additional bite on attendees that always happens off in the corners, and out in the hallways.

I'm assuming that everyone reading this blog knows what an absolutely bottom-of-the-barrel, assembled-from-Ann-Coulter-and-Ben-Shapiro-leftovers  hobgoblin Candace Owens is, but for the unlettered, the Journal-Register, to its credit, not only put some of Ms. Owens' more loathsome batshittery right up front in the second and third paragraphs --

Owens, 32, an author, a frequent guest on Fox News and prolific poster on Twitter, has said the 2020 presidential election that former president Donald Trump lost was “rigged,” COVID-19 is a “ridiculous scam,” Black Lives Matter is a “trash organization,” the National Association for the Advancement of Colored People is a “disgusting group,” and white supremacy and white nationalism are “not a problem that is harming Black America.”

Owens, who is Black, told Fox News that former Minneapolis police officer Derek Chauvin, who is white, was a victim of “mob justice” when he was convicted in the death of George Floyd, a Black man, and Floyd was a “pawn” in a political game.

-- but actually ran a second, parallel article ("What makes her so controversial") right next to this one in which they print a sampling of her Tweets.  Such as this:

“Tucker Carlson told the truth about #BLM: it has nothing to do with black lives. When 18 black people were murdered in 24 hours in Chicago #GeorgeFloyd riots, plus 10 people shot in Brooklyn in one hour — the movement is about black anarchy. And I will never bend a knee to that.”

“Wish I could send @DonaldJTrumpJr a genuine “get well soon” message. but like millions of others Americans — he’s perfectly healthy with absolutely no symptoms, despite a test telling him that he’s sick. Most ridiculous scam in the entire world. Covid-1984.”

And just from reading what the GOP leaders on the record, it's clear that they know perfectly well who Candace Owens is and would very much like it if you didn't ask about whether or not they agree with her:

[Chairwoman of the Sangamon County Republican Central Committee Dianne] Barghouti Hardwick,  wouldn’t comment on whether concerns have been raised by any local Republicans about Owens’ upcoming appearance, saying it is an internal matter.

Maybe their squeamishness comes from Owens' overall record of being a irredeemably horrible human being or maybe it is specifically because Owens is an infamous COVID-19 denier, a mask-hole and vaccine panic-peddler who "will not be touching the vaccine", while the Lincoln Dinner honoree this year is...

...the local party’s immediate past chairwoman, Rosemarie Long, who died Feb. 2 at age 78 of complications from COVID-19.

So how are local Republican party leaders trying to straddle their need to raise money in a party that remains dog-loyal to a deranged racist traitor named Donald Trump...and the unavoidable fact that the Trump myrmidon they hired to bring in the dough and fire up the rubes is a bottomless pit of appalling?

By trying to reframe their cravenness and cynical opportunism as a virtue.

"[Owens is] a young, energetic, African-American woman who has a lot of energy and is appealing to young people.”

When Barghouti Hardwick was asked whether she agrees with Owens’ past statements, she responded: “I don’t agree with everything any speaker would say. My major emphasis is that we have to be a ‘big tent.’”

A prominent local Republican, Sangamon County Circuit Clerk Paul Palazzolo, said in an email that Owens is a “dynamic, conservative African-American woman which shows our party is reflective of all independent-thinking people regardless of race or religion.”

Andy Van Meter agrees with Owens on some stuff, disagrees on others, but hey, who among us agrees with everything someone else says right?

But [Van Meter] added, “I don’t agree with everybody I see on television.”

The article wraps up with this by Van Meter:

“We have to act like a big tent and hear all points of view,” he said.

First, like the rest of the Republican party, the Sangamon County GOP is neither a conservative nor a mainstream organization.  It is the a backwater regional outlet of a fascist doomsday cult that will finally finish off our democracy it it every claws its way back to power.

And second, I trust you noticed how every party leader has been trained to repeat the Magic Conjure Words "Big Tent" any time anyone asks them any question about the fascist doomsday cult that they serve.

Strange sort of Big Tent though.

Like the opposite of Dr. Who's TARDIS, it's Big Tent which is much smaller on the inside than it appears on the outside.

It's a Big Tent that cast out Liz Cheney of Republican leadership -- the same Liz Cheney these same people were celebrating and literally embracing right here in Sangamon Country less than two years as a shining example of Women in Republican Leadership, who has a nearly-perfect wingnut voting record and who voted for Trump twice -- for the cardinal sin of not being willing to back Donald Trump's Big Lie or pretend that the January 6th insurrection really wasn't much more than a class field trip that got a little bit rowdy.

So Cheney if no longer welcome in the Big Tent, who is?  What's the spectrum of "independent thinkers" of  "diverse perspectives"  who have not only been welcomed into the Big Tent, but have been given the honor of keynoting the Sangamon County Republican party's Big Annual Event?

The year before that -- 2019 -- it was noted perjurist, unindicted Iran/Contra traitor, former NRA president and Fox News goon, Oliver North.  And here are a few of the diverse and independent-thinking opinions he shared with his audience:

The 75-year-old North, who became president of the NRA last May, also said the “disarm America movement is the best-funded, most sophisticated assault on our American liberties in our history.”

The year before that it was Fox News in-house train-wreck/barfly,  Jeanine Pirro.

The year before that wingnut-network-job-hopper and H.R. Haldeman stunt-double, Corey Lewandowski.

Are we noticing a pattern yet?

The year before that, 2016, it was none other than Fox News prime-time Gorgon, Laura "Eva Braun-nose" Ingraham.  Chairman of the dinner and said Sangamon County Circuit Clerk Paul Palazzolo explained:

"We wanted somebody who had some recognition.  Every time they are on a show or a radio program and we’re promoting her coming, that’s good PR. And she’s a positive speaker."

In 2015 it was Corey Lewandowski again.

And in 2012 they signed red-meat vendor Ted Nugent who let this old town know what to expect by telling local reporters that Barack Obama was an “America-hating punk.” The Sangamon County Republican party billed Nugent as a "rocker, hunter and gun enthusiast" but somehow neglecting to mention all the crazy, murderous, threatening shit he was always up to,,  Because let's facie it, that shit was the only reason local racist meatheads were willing to shell out $100 to see him live.  Here's a small taste from Think Progress, April 20, 2017:

Nugent’s 2012 comments about Obama — who he has called a “piece of shit” and a “subhuman mongrel” — are far from the only threat he’s made against prominent Democrats. As the Daily Beast chronicled, Nugent discussed shooting Harry Reid during the National Rifle Association’s annual meeting in 2015. In January 2016, he called for both Obama and Clinton to “be tried for treason & hung.” Nugent once called Clinton a “worthless bitch” and called for her to “ride one of these [guns] into the sunset.” He told Obama to “suck on my machine gun.”

And here's a little more of Ted Nugent road show sedition that commended him to the attention of the Sangamon County GOP:


No  decent human beings would want to be in any way associated with scum like Nugent and Ingraham and Owens, and sure as shit no actual "conservative, mainstream” outfit would ever in a million years hire them and give them the center stage at their most prestigious annual event named in honor of Abraham Lincoln.
But the Sangamon County GOP does.  They hire grifters and lunatics to publicly enact Republican rituals of rage, racism, paranoia. This is ancient stuff -- the theater of pity and terror -- but with no resolution.  No catharsis,.  Just endless whining about their 1000 imaginary grievances, and endless screeching monologues about the demonic, commie Left, hoping -- praying -- to goad and sneer and ridicule a few Liberal tears out of us.
Because feeding on the misery they can inflict on others is all these vampires of the Big Taunt Party have left.
at May 18, 2021

The Big Taint Party has been this gawdawful longer than the median voter has been alive. The MSM needs them to be viable, so continually allows erasure and revision of the record.

“The Lincoln Dinner honoree this year is...

...the local party’s immediate past chairwoman, Rosemarie Long, who died Feb. 2 at age 78 of complications from COVID-19.”

Proof positive of my theory that Irony chained an anchor round her neck and jumped off the Brooklyn Bridge in late 2016.

Spare a thought for the stay-at-home voter
His empty eyes gaze at strange beauty shows
And a parade of the gray suited grafters
A choice of cancer or polio.