Past Perfect: Liz Cheney in Lincolnland 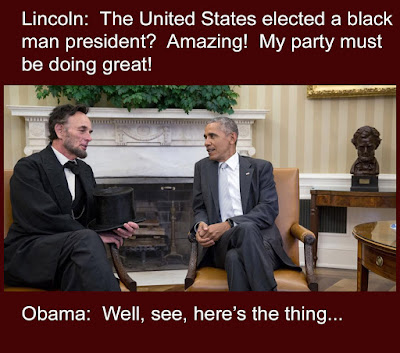 Sangamon County is known primarily for three things*.  It is the world headquarters of The Professional Left Podcast, it is the county where Illinois' state capitol of Springfield is located (Motto: "Home of the Third Most Crippling Tiny State Capitol Inferiority Complex In America!") and it is the headwaters of all things Lincoln: Lincoln's home, his law offices, his Tomb, his presidential library and several thousand plaques, statues, pubic art projects and tourist whatnots.  Here, every corner of every cornfield, every dilapidated building and every bend in the Sangamon River tries to claim bragging rights to something to do with the 16th president.

But despite being the home of the state capitol of a very Blue Illinois, and the final resting place of a president who was, in every imaginable way, the mirror opposite of Donald Trump, Sangamon County is very definitely Trump country.  And less than two years ago, this was the event that the Sangamon County Republican Party was button-bustin' proud of:

And the wingnuts here loved her.  Rodney Davis even took time out from his busy schedule of lying about Nancy Pelosi and (I'm not kidding) blaming her for the lack of women and minorities in the GOP --

Davis blames Pelosi for lack of women in GOP

At an official event his office billed as “non-partisan,” Congressman Rodney Davis embraced the most powerful woman in the House Republican Conference, and blamed Democratic House Speaker Nancy Pelosi for the lack of diversity in his own party’s ranks.

“There are too few members of our Republican conference that are women or African-American or are a minority,” the Taylorville Republican told a group of local women who were invited to hear him speak at the Old State Capitol on Monday afternoon.

“I get asked a lot, ‘what do you think as a Republican with the fact that you have many fewer women in your conference today than you ever have?’ he volunteered. “I like to remind people that it is Nancy Pelosi who in many cases spent millions of dollars to elect a male Democrat over a female Republicans in swing districts.”

In fact, Pelosi’s decision to back Democratic men in swing districts did help defeat two Republican women in swing districts, but her political and financial backing also aided in key victories for 17 Democratic women over Republican men in the same year, tilting the scales of Congressional gender diversity more in line with the American population than ever before...

-- to personally host the Lizard Queen of Wyoming --

Davis hosted Wyoming Congresswoman Liz Cheney to speak about her life as the daughter of former Vice President Dick Cheney, and as the highest-ranking GOP woman to ever serve in the U.S. House of Representatives at an event his office described as a ‘Conversation on Women in Leadership.’

-- and taking her into his clammy embrace --

Davis embraced Cheney, both literally and politically, and said “I can’t wait one day to be a delegate from Illinois to elect Liz Cheney as President of the United States.”

In return, Cheney told the Central Illinois audience that the Congressman “absolutely is a leader for us” who “helps to guide the [GOP] conference” with “a calm, steady demeanor” as someone who “wants to get things done.”

-- because climbing politics' greasy pole is difficult, especially for one as completely bereft of talent and charisma as Rodney Davis, so Inert Carbon Rodney has to seize any opportunity for advancement that comes his way and hang on tight.

Republican Reps. Rodney Davis of Taylorville and Darin LaHood of Peoria were absent when the House GOP conducted a voice vote this week to strip Wyoming's Liz Cheney, a critic of former President Donald Trump, of her leadership position in the chamber.

Both lawmakers dodged questions as to whether they would have voted to retain Cheney as GOP conference chairwoman...

No matter how quick you are, you'll never catch Rodney Davis standing on principle.

*Yes, I am aware that the 1908 race riot in Springfield, IL led directly to the formation of the NAACP, but it is not primarily known for that, and more's the pity.
at May 18, 2021

I imagine people that are so devoid of a soul, incapable of comprehending the 1st commandment of, "Bearing false witness", no matter if you are religious or not.
How folks can become so mentally vulnerable being exposed to propaganda. Feeding off it as something to make you superior, important and strong. when engaging others.

God did not make these humans sheep to be sheered. When he supposedly
God made man in his image. I just don't think GOD looked into the mirror and saw a sheep and created man like that image.
I do think the environment instilled in people from birth, in the wrong environment can impose that Kool aid drinking sheep to be sheered state of mind.

It is nature that everything has its predator. Circle of like sort of thing for the simpler minds. Give that balance to nature.

From what I can tell, there are a few developing predators of the republican animal. One would be law and order, opposing views, and the cannibalism of the republicans themselves.
I assume their are more that will bring balance into the Republican animal.
Like Truth catching up to them after their lies harmed the very ones they promised. But the harm has to hurt, really hurt to shock the system enough to break free.
It is truly a gooey cesspool they wallow.

Did you deliberately change it from Inanimate Carbon Rodney so as not to be mistaken for a threatener, or was it, as a ol' gray donkey of our acquaintance once said, the Merest Accident?