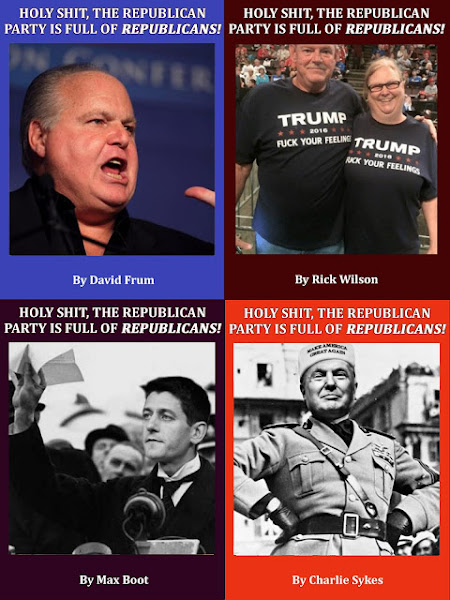 In an act of political Ouroborosism so meta that it threatened to turn the spacetime continuum inside out, this week George W. Bush decided to take his namesake contraption -- the Fabulous, Tea-Baggulous Bush-Off Machine -- out for a spin.

Mr. "You're either with us or with the terrorists" said it was wrong to scare people to score political points:

"It is a beautiful country that we have, and yet it is not beautiful when we condemn, call people names, and scare people about immigration," Bush said.

"It is an easy issue to frighten so many electorates, and I am trying to have a different kind of voice."

Also, this second worst president in American history -- whose catastrophic policies and divisive political tactics supercharged the already-berserk Republican base -- is worried that his Republican Party is headed in the wrong direction.

Asked how he would describe today's Republican Party, Bush then said the GOP has become "isolationist, protectionist, and to a certain extent, nativist."

But the miraculous machine that transforms one's political identity and vaporizes one's inconvenient past can't really be called the Bush-Off Machine anymore, can it?  After all, that machine has already done it's work and done it well, metamorphosing rabid, racist Bush/Cheney supporters into rabid, racist Independent/Constitutional Conservative/Libertarian/Teabaggers who swore they'd never heard of Bush or Cheney.

And from there it was just a hop and a skip to their final costume change into Trump's rabid, racist goon squad.

However, as I've written about many of times on this weblog and as Blue Gal and I have discussed many times on our Professional Left podcast, the rise of Trump created a desperate need for an upscale version of the same of apparatus.  A miraculous machine that would transform the political identity and vaporize the inconvenient past of a small clique of elite Republican leaders, Conservative influencers and their fellow travelers in the mainstream media.  A political vanishing cabinet for all of those who spent decades making their living pandering to the rabid, racist Republican base and building the Republican Monster Factory that would meet these three specifications:


And so, once again, with great respect for the work of the immortal Theodor Seuss Geisel...


The Not-Me-Belly Sneetches
Now, the Right-Belly Sneetches were morally blind,
The Left-Belly Sneetches thought they were out of their mind.
The Right-Bellies were wrong but amazingly loud.
You would think such a thing wouldn’t make them feel proud
But because they were Righties, the Right-Bellies would brag,
“Left-Bellies are nothing but Commies in Drag!”
"They hate our Great Nation," The Right-Bellies said.
They're Marxist flag-haters who want us all dead!
They're leader's a Kenyan with suits that are tan!
And his wife's even worse!  She has arms like a man!
It's their lack of Right-Bellies that gives them away
They're America-haters! And probably Gay!"
For years this went on, this racist weeping and wailing
(As they memory-holed years of Bush's epic failing).
They stomped and they brayed and were on Fox every night,
Whining how unfair things were for folks who are white.
There was no need to be careful or watch they said
For soon Jeb would lead them, or maybe Marco instead.
But then something happened that made elite's blood run cold.
The mob would not listen.  Would not do as they're told.
They said "no" to Marco and "no" to Jeb too.
They turned down a Kasich and told Carly to shoo.
They wanted the loud one, the bigot, the thug.
His rantings and ravings was their favorite drug.
The elite watched helpless as their base ran away
As the mob they had made backed Trump all the way.
They wanted a Wall and to settle their grudges
And tax cuts for the rich and lunatic judges.
Nothing really mattered because facts weren't real
And if you don't like it, well fuck you how feel!
This made Righty elites look like ignorant tools
Their smug windbagging sound like the bluster of fools.
They were stripped of their titles and their media gigs
So far out of favor they might as well have been Whigs.
But the worst of it all? The knife to the heart?
Was the god damn Left had been right from the start.
The Right-Belly elite were in a full-blown panic
How could they have failed on a scale so titanic?
For years they'd been paid for being righteous and shrewd,
For mocking the Left-Bellies as alarmist and rude.
Now their Right-Belly tats made them look shithouse-rat-nuts
Their own words had damned them, no "ands", "ifs" or "buts".
Then out of cold storage rolled their route to salvation
(A device kept on hand for just this occasion.)
Of course the Bush-Off Machine needed an updated name;
Something to deflect this new source of shame.
So with a little light dusting and a lick of new paint
The Trump-Off Machine began turning sinner to saint.
For the elite of the Right now came ouchless redemption,
And their pasts disappeared with barely a mention.
Erased were the lies they had told in profusion;
Those grandiose fictions that fed wingnut's delusions.
From the Trump-Off Machine they came unsullied and free
Now the wisest of sages!  And with jobs on teevee!
"The Party of Trump is now lost to reason!
They're racist and stupid and really dig treason.
They're freaks and fanatics and chug QAnon sludge
And away from derangement they never will budge."
And if asked, "When did all of this madness begin?"
"Twenty Sixteen," they'll say with a sly little grin.
Before that year all is darkness and gloom.
Who knows who did what, and when, and with whom?
There's no use in pointing any fingers of blame.
All records are lost.  It's a terrible shame.
"The past doesn't matter," the Not-Me-Bellies swear.
"Except when it does," they also declare.
Now the Not-Me-Belly Sneetches are all over town
In print, on teevee and on podcasts renowned.
While Left-Belly Sneetches who were right the whole time
Have been dropped down a hole out of which they can't climb.
And that, fellow Lefties, is the future I fear.
As long as those with the cameras can make the past disappear.
Burn The Lifeboats

Email ThisBlogThis!Share to TwitterShare to FacebookShare to Pinterest
Labels: Sneetches

Are the GOP headed back to the American Taliban legacy season?