Matthew Dowd and the Absolutely Inevitable Crossover Episode That Nobody Wanted 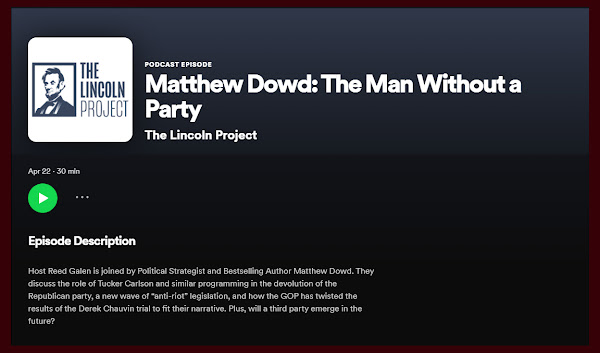 As a professional podcaster who has been in the business for [checks notes] a decade longer than the Lincoln Lads, here is my professional advice as to how they could've turned this episode into a viral sensation.

Put a Liberal on the panel.

And make sure it's a Liberal with a functional memory and has no fear of reprisals who remembers just exactly who the Lincoln Lads are and remembers verbatim all the smug Both Siderist/Disrupt!/Destroy the K'rupt Duopoly! shit Mr. Dowd was talking back in 2016 when he was the chief political analyst for ABC News

That podcast would've be so lit you 'd could've seen it from orbit.

Instead the Lincoln Lads have once again served up another bland-as-tapioca, former-Republican pity party beamed in from an alternate universe where the GOP went spontaneously and inexplicably insane  five years ago and where the decades of Liberal warnings that the GOP was racist to its core and racing towards fascism does not exist at all.

Because, in case you haven't noticed, Never Trumpers are scared to death of Liberals who show up with a sword in both hands and all the receipts.

Dual wielding looks cool in movies, but isn't usually best practices. Sword and shield, something efficient like a Mainz gladius, or something you swing with two hands is the way to go. May thy blade chip and shatter.

For Dowd it is returning to the secret Heritage laboratories and recloning their Furor.

This time with less orange dye To perfect the greatest GOP leader since Hoover.

The problem Dowd never seems to confront is his unrealistic ideologies . Which he can never live up to let alone anyone else. But expects and demands complete obedience by others. That superior race privilege built in to provide even him a special place.