Breaking: No Political Party is Ever Responsible For Anything 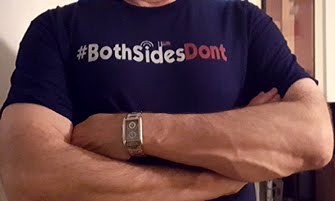 It must be true because I read it in The New York Times.

You see, according to Mr. Nate Cohn of The New York Times, no political party should ever be held responsible for their actions -- no matter how monstrous or premeditated -- without also holding any opposition to that party's calculated malice equally responsible.

Why Political Sectarianism Is a Growing Threat to American Democracy
The country is increasingly split into camps that don’t just disagree on policy and politics — they see the other as alien, immoral, a threat. Such political sectarianism is now on the march.
By Nate Cohn, April 19, 2021
American democracy faces many challenges: New limits on voting rights. The corrosive effect of misinformation. The rise of domestic terrorism. Foreign interference in elections. Efforts to subvert the peaceful transition of power. And making matters worse on all of these issues is a fundamental truth: The two political parties see the other as an enemy...

That contention helps make sense of a lot of what’s been going on in American politics in recent years, including Donald J. Trump’s successful presidential bid, President Biden’s tortured effort to reconcile his inaugural call for “unity” with his partisan legislative agenda, and the plan by far-right House members to create a congressional group that would push some views associated with white supremacy. Most of all, it re-centers the threat to American democracy on the dangers of a hostile and divided citizenry...

I suppose I should thank Mr. Cohn for rounding up an confirming all of my worst opinions about American political media in a single op-ed.

My belief that, generally, the mainstream media is incapable of learning anything.

That as soon as Trump was dispatched to MAGA-a-Lago and the dead and wounded were carted away from the U.S. capitol, the Republican Insurrection would be memory holed faster than the Iraq War.

That mainstream media Both Siderism would come roaring back the minute the coast was clear.

And that until the rising tide of Republican fascism swamps the executive offices of The New York Times the Sulzberger family will continue to pay David Brooks-wannabes to trowel out toxic codswallop like this.

Intentionally or not this article is a perfect restatement of the NY Times core principal. A principal that has been followed since the mid 1920's when fascism rose.

That principal is that all aspects of American rightest populism which are fascist are perfectly acceptable and deserve equal and really more than equal respect in American political discourse. This has served the Times well for 95 years and I guess we should be thankful that liberal democracy has survived for almost a century while democracy's enemy, fascism, has been given respected position at the table.

It seems that whole article is pay walled. Here is the discussion of his 14 traits of fascism.

Of particular note at this time is the entry on heroism. The opposition to masking and vaccination should be seen as a manifestation of this. An eagerness to risk death is in their minds heroic.

I raise your NYT both sider not responsible with Boehner's Obama caused the racists TEA party to become racists and double raise with The latest cockroach to show itself in daylight for a long time. The Eric Cantor Roach. Finally escaped from that Roach motel. probably chewed his own leg off to get out.
Because he wanted us all to know the truth that would set us free. That Obama as president flaunting his dark skin in the faces of decent white supremacists minding their own business setting crosses on fire at designation private properties that was not theirs. To stop and stand up for their pale-eon skin tone rights of superiority.

Cantor went along with the Birther conspiracy, A man who claims to be devout in his Jewish belief demeaning Obama as a Muslin while he trashes the Baptist preacher at the church Obama attended for years. And note, never did the media interview anyone else from that Baptist church even though they made it sound like Obama was the only attendee.

There is too much documented history and too many people (as I) for Cantor to break out of the roach motel and spay his shit to fertilize the white supremacy vote.
In the name of , The Jews will not replace us party Cantor is hand cuffed to..

You do know that "legislative agenda" and "Insurrection" are exactly the same thing, don't you?