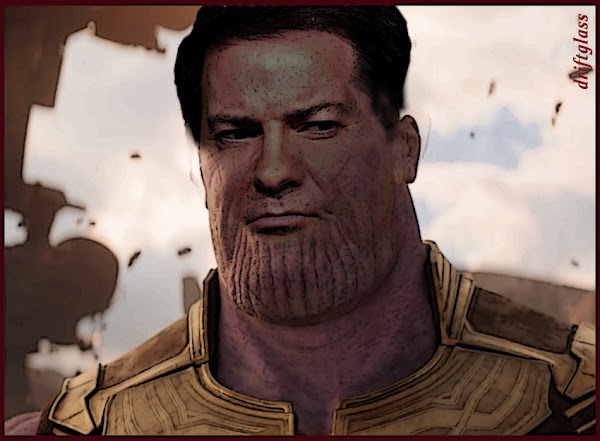 As reported on this disreputable weblog less than two months ago, Mark Halperin's career plummet from the chopper to the chipper had reached its nadir.  Once the runaway leader in workplace sexual predation, Beltway hackery and straight-faced, monotone Conservative talking-point recitation, in less than four years Halperin been reduced in station to an audio animatronic pitchman for NewsMax, "interviewing" for twice-impeached traitor Donald Trump for the titillation of that propaganda outlet's thousands of mouth-breathing idiot viewers.

He is helping run a small manufacturing company that makes colorful, environmentally-friendly  countertops and hires and trains refugees and the formerly incarcerated.

I was thinking of Anthony Weiner.

After a stint in prison and some consulting work, the former congressman is running a company that makes countertops out of concrete and crushed Heineken bottles.

Not long ago, at the Brooklyn Navy Yard, Anthony Weiner, the former seven-term congressman, mayoral hopeful, registered sex offender, and cameo star of “Sharknado 3: Oh Hell No!,” pointed a temperature gun at a guest, grabbed a bright-green hard hat, and stepped onto the factory floor of IceStone. “So, we make countertops here,” Weiner said, of the company that he’s been running since May. Notable clients: nasa (bathrooms), Whole Foods (salad bar), Ed Norton (residence). “Fairly low-tech. It’s like what you did in elementary school making pottery.”...

...Asked about life on the inside, he said, “I wouldn’t recommend it to others.” One of his prison visitors was Dal LaMagna, the beauty-tools magnate known as Tweezerman, who later pivoted to environmentally friendly countertops. The two had met, years ago, on the political circuit. (LaMagna considered running for mayor and sought Weiner’s counsel. Weiner advised against it.)

“When covid was crushing the company, and crushing everything else, Dal approached me and said, ‘What if I stepped back and just kind of gave you the keys?’ ” Weiner recalled. IceStone, a certified B Corp, has a history of helping the downtrodden, including formerly incarcerated people. “I would be a high-profile example of that category,” Weiner said. “For years, this company has also hired refugees from Tibet.”

Halperin, on the other hand, has made himself into a creature so fragile and specialized that he can only function in one environment: the incestuous Beltway insider cesspool.   Which is why you won't find him working a hard-hat gig helping the disadvantaged, or teaching high school English to underprivileged kids, or opening a bakery, or whatever.  No, all of his efforts -- and all of the efforts of his cronies in the media like Michael Smerconish, Mika Brzezinski, and Joe Scarborough -- have been exclusively focused on getting his ass back into the good graces of the lords and ladies of the Beltway where he could continue his climb back to some perch where he could inflict his horrible opinions on the public.

Former journalist Mark Halperin has been hired as a consultant for the non-partisan policy organization No Labels, Punchbowl News reported on Tuesday.

“We have spoken with Mark Halperin about a short-term consulting project” said No Labels senior advisor Margaret White in a statement shared with the news outlet.

“Staff members of No Labels, including CEO Nancy Jacobson and Co-Executive Directors Margaret White and Liz Morrison, have spoken with Halperin and believe a second chance is warranted in this case,” White added...

We now turn to Gretchen Carlson for a different perspective:

In the Beltway pundit ecosystem, there is no value higher than protecting one of their own.  They'll lose interest in impeachments and armed insurrections within weeks, but four years after his career collapsed under a torrent of sexual misconduct allegations, there they are, still hard at work trying to get a slug like Mark Halperin a seat back at the Big Boy table.

And as long as self-interested self-promoting self-protection remains the Beltway's Prime Directive, hobgoblins like Mark Halperin are inevitable.

Email ThisBlogThis!Share to TwitterShare to FacebookShare to Pinterest
Labels: halperin

Good for Weiner. I wish him a long and successful career in the countertop industry.

Halperin on the other hand...

What's a little sexual harassment when you can be useful to your corporate masters.