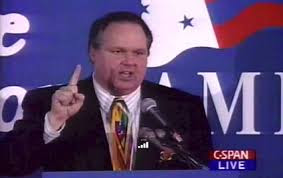 First, a little history.
Here is Rush Limbaugh letting his eliminationist freak flag fly all the way back in 1994 as he addressed to incoming House GOP freshmen:

"Let me give you one more piece of advice. Please, whatever you do, leave some liberals alive. I think we should have at least, on every college campus, one communist professor and two liberal professors, so we never forget who these people are and what they stand for. We can always show our children what they were and what they are -- living fossils, ladies and gentleman. Keep them: living fossils."

And here is Rush Limbaugh seven years later being even more explicit over dinner with Margaret Carlson:

"I tell people don't kill all the liberals, leave enough around so we can have two on every campus; living fossils, so we will never forget what these people stood for."

Well it looks like Rush Limbaugh is finally getting his wish.  Liberals are, at last, going, going, gone, baby, gone.
And the irony of it?
The people who are making Limbaugh's dream of a virtually Liberal-free country come true are the very same one-time Limbaugh acolytes and imitators over at The Bulwark who now swear they've barely heard of the man, and certainly do not approve of him.
You know, the real heroes if the republic.
The following exchanges take place on The Bulwark podcast here, with emphasis added to draw your eye:

Charlie Sykes:  Because I know that you guys [The Bulwark's Tim Miller, Jonathan V. Last, and Sarah Longwell]on [The Bulwark's] Next Level podcast had a debate about all of this. Gabriel Sterling is a Republican.  He is a Conservative Republican.  He sounds like he voted for Donald Trump.  He says that he intends to vote for Kelly Leffler and David Perdue so is it safe to say there are some people who think screw that guy? No?
Tim Miller: Yeah. yeah that's the JVL take um which is just like, okay, yeah great pal. Like now now that this has come to your backyard you're worried about this the rest of us have been dealing with this for five years.  Where you've been?  Yeah, um and... and you're still going to vote for Kelly Loeffler and David Perdue who are spreading all the same things you decry.  So I mean that was basically his take and I, by the way, I'm sympathetic.

So if you're a Republican who has been "dealing with this" since your party threw itself at Trump's feet  it's perfectly reasonable and justified to demand to know where the fuck these Johnny-Come-Latelys get off.

But if you're a Liberal?   Who's have been dealing with the GOP monster factory that spawned Trump since Miller was in high school and Sykes was a cut-rate Limbaugh imitator making his living shitting on Liberals on Wisconsin radio?

Well you, my friend are far too inconvenient to be allowed to exist at all. 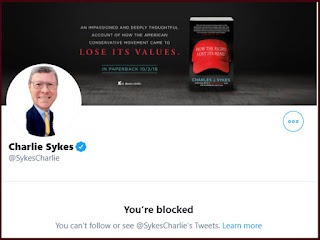 Sykes: What was your take on that?
Miller: Yeah I'm sympathetic to that take uh I... I.. also don't, you know. think that...that, you know, we should put Gabriel Sterling on Mount Rushmore or anything like that but at the same time it's, like, somebody's got to do it.  There's just this craving for people to to speak out and say clearly, "Enough!" And it's just, you know since, Jay Nordlinger had a good that's... that Tweet about this which is like have any of the Trumpers since the election come out and said, "You know what?  The... the guys, the Never Trumpers really had it right on this!  Like this is just too far." Like, you know, they've... some of them have said this is bad, what he's doing, but have any of them taken the next logical step and said "Enough!" And so you know it falls to a staffer for the a mid-level, you know, elected official in Georgia to just come out and say what, you know, freaking Ben Sasse should be saying, what Liz, you know... what, who, what Kevin McCarthy should be... what Mitch McConnell should be saying, right, which is like "Enough of this!", like, "Enough!" okay.  So, you know,  good for him I guess.

So if you're a Republican who has been "dealing with this" since your party swore a blood-oath to Il Douche, you are perfectly within your rights to ask why the hell those Johnny-Come-Latelys ca't just admit that you got Trump right and they got Trump wrong.

But if you're a Liberal?  And you've been right about the Right all along and have taken all kindsa shit for it from Never Trumpers?

Well you, my friend, can fuck right off. 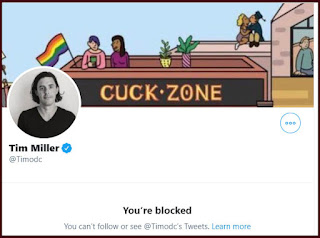 Sykes: I think so too but I'm...again, understand the argument especially, you know for those of us who've been yelling about this for the last five years that you have a lot of these folks who did not seem to object when Trump was, you know. inciting violence against, uh, protesters... was making up stories... was leading the chant of "Lock Her Up!" or, you know, talking about beating people up or, you know, send her back or all of those things, they... they didn't have anything to say about that. But when it was them that's when they became upset.  On the other hand, okay, you know what it comes down to is if we're actually going to save this democracy... if... if the institutions are going to hold, it is going to require people like Gabriel Sterling and and... Roefinsburger and Governor Ducey and Governor Kemp and however much you dislike their politics in the past, if they don't do the right thing then horrible things are going to happen.  So if we're going to turn this around it is going to mean that people who have been wrong are willing to stand up... wrong on their on their politics... are willing to stand up and say "Okay, you know, yeah, we voted for these people but we're not going to cross this line."
...
Sykes:  So there's got to be some, I think, gratitude for the people who are [finally, grudgingly] doing the right thing.  Doesn't mean you throw them a parade.  What was Jim Swift's line? "Don't make them the Grand Marshal, but at least give them a tasteful float in the parade."

Remember kids.  As your old pal Unca driftglass has told you, if don't want to waste your time and talent as a Liberal blogger out in the sticks but instead dream of glory as a well-paid mainstream media political pundit, there are a few, key code-phrases you will need to memorize if you want to to get past the bouncer.
And chief among them is...

Local election of House Rep. in my district. GOP incumbent runs ad that if his radial liberal opponent gets elected. Will be a California far right liberal America hating Pelosi rubber stamp robot.
Using the 40 years of brain washing into responding to trigger words...........

But here is my question that was never brought up and is not confronted much today.

Since the GOP candidate was reelected to the House. Does this mean he will be a right wing white supremacist authoritarian Putin loving California Kevin McCarthy rubber stamp robotic submissive pet?
Interrupting the trigger fingers twitch of the trigger word conditioned. Has to be confronted.
Example, the Socialist word trigger from the HOP. Face to face confronting of the GOP candidate that uses this. Confront with their republican socialism for Wall Street and Farmers. Hell, Trump was promising socialism for the forgotten coal miners that he forgot about..

Oh sure, they always want to speak to the issues of the present.

problem is, If you do not tackle the trigger words, these conditioned voters are too focused on their finger pulling the trigger of hate and cannot hear anything else.