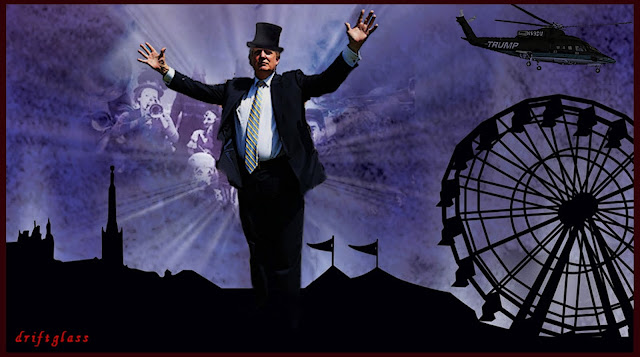 ...“Trump changes his tone, gets real on the coronavirus threat,” read one Associated Press headline; “Trump shifts tone as pandemic worsens,” USA Today asserted; and CNN anchor Dana Bash took to the airwaves to “applaud” his “remarkable” pivot to a “tone of calm and understanding” that people “yearn for in times of crisis and uncertainty.”

...
“It’s so easy, can you believe it?” the president said during a dinner at the White House in early 2017, according to a source who was in the room at the time. “All I had to do was be a little nice… and do something beautiful [and now they’re] saying all these terrific things about Trump.”

During that conversation, Trump was referring to several high-profile TV personalities who usually were highly critical of him, but who were suddenly being “fair” to him for a news cycle, the source recalled. The dinner took place not long after the president addressed a joint session of Congress in February 2017 for the first time since his inauguration. During his speech, Trump honored the widow of a Navy SEAL who was killed in Yemen, in a nationally televised moment that was heralded as emotionally moving.

“He became president of the United States in that moment, period,” liberal commentator Van Jones said on CNN at the time. “That thing you just saw him do, if he finds a way to do that over and over again, he’s going to be there [in office] for eight years.”...

-- I thought it might be helpful to review three of the immutable laws of physics under which the media operates.

New Tone's First Law states that while Donald Trump is clearly a lying sociopathic threat to the nation, the media will collectively agree to ignore it as best it can and hope for the best.

New Tone's Second Law states that, when overwhelmed by events he cannot immediately lie his way out of, Donald Trump will grudgingly become slightly less vulgar and will sniffle and stumble slowly through remarks prepared by other people. The media will then hailed this development as Trump finally "becoming the president".

New Tone's Third Law states that every time events force Donald Trump to become momentarily less of a lying assbag, he will almost immediately explode with an over-the-top-loathsome opposite reaction.  To which the media will react with surprise, as if no one could possibly have seen that coming.

Andy Borowitz posited that the change of tone stemmed from the realization that everyone dying would hurt his TV ratings...

occssion of being the president americans have been hoping for. She says this very often whenever his clowning is somewhat different.

Think back to the Iraq (they threatened my daddy( War.

The FOX reporter standing in front of a Armory at an abandon Iraq military base. As the reporter was saying the Iraqi's ran and abandoned the place, Trucks, including a semi Truck gept pulling up in front of the armory and loading up weapons and explosives and driving off.

The FOX reporter kept on script of the abandoned base while the camera kept filming the oblivious report of what took place behind him. Those explosives and weapons were later used in road side bombs and arming the Iraqi rebels against the Coalition forces that consisted of one or two Canadians and Filipino cooks.

Those road side bombings and Iraqi resistance fire fights were later blamed on Iran for supplying the Iraqis.
While GW Bush deployed a Navy Ship off shore the Calif. coast with the banner, "Mission Accomplished/
GW mustered those "Tonal inflections" long before Trump.

Perhaps the major news companies should hire comedians and send them in as the white House correspondence press corps.
I would Trust Steven Colbet ability to pose questions to pierce the Trump media spankings for ratings.
Our American Comedians could self deprecate, word the questions to make the Trump ego feel large and in charge and lead to drooling out truth.

Is this a certain cure? Not saying that but am willing to give it the old Rosie Riveter try.

I learned some time ago in my youth. Civility is lost on the absolute uncivil.