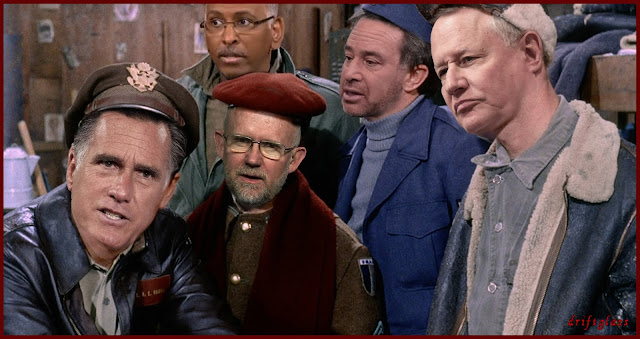 
How can you tell when a Never Trumper is lying?

When they insist on pretending over and over again in the face of a mountain of evidence to the contrary so massive that it blots out the sun that the last 40 years of Conservative slander, sedition and fuckery never happened.

Conservatives have spent over half a century disproving the claim that we are the stupid party. Now, under Trump, conservatism is embracing, indeed reveling in...stupidity. #CPAC2019
— Bill Kristol (@BillKristol) February 28, 2019


How can you tell when an ally is not an ally?

When they insist on letting them get away with it.

Of course, no matter how many times I turn out to be right, because I'm not a billionaire, my opinion is irrelevant.

You know whose opinions are not irrelevant?

All the same Bush-era villains on the Right who have been wrong about everything since forever but who have unlimited access to the Beltway hype machine (from CNN)...

A handful of writers and editors who worked at The Weekly Standard, the now-defunct conservative magazine that was deeply critical of President Donald Trump until its sudden demise in December, have a new home.

Starting Monday, Bill Kristol, a co-founder of The Weekly Standard, and Charlie Sykes, the former talk radio host and conservative commentator, will beef up The Bulwark, a conservative website that has until now served as an aggregator for Kristol's non-profit group, the Defending Democracy Together Institute...

...and the patient capital of fascism (from Axios):

Jonah Goldberg is leaving National Review in the coming months to start a new conservative media company with Steve Hayes, who was editor-in-chief of The Weekly Standard when its owner shut it down in December.

Details: Goldberg and Hayes tell me they plan a reporting-driven, Trump-skeptical company that will begin with newsletters as soon as this summer, then add a website in September, and perhaps ultimately a print magazine.
...

Hayes and Goldberg are seeking investors...

Those of us with functional memories and a strong allergy to hypocrisy remember those once-upon-a-time bygones days before MSNBC went into the Bill Kristol perpetual-career-rehabilitation business (from Crooks & Liars).  And what a time it was...


Men like Bill Kristol retain their reserved seating at the Beltway Media table no matter how objectively awful they are for the same reason Sterling, Cooper, Draper, Pryce kept Peter Campbell around.


Because men like Kristol provide the media corporations which employ them something of much greater and more tangible value to them than truth or accuracy.  Something worth more to a tiny coterie of political power brokers on the island of Manhattan than it costs them in the contempt they earn from their Liberal viewers.

And, of course, Goldberg and Hayes will find lots of wingnut welfare donors because 90%of the big money is with reactionaries and only a small fraction with liberals, which is a big reason liberal/progressive media and other communication platforms are so small.

Izzy Stone was not a billionaire. Keep it up, she said.

Read a couple of Rexroth poems and get back into it.

Like the Star Trek Next Gen. episode portrayals of the Borg maybe or more like vast massive organized crime the RICO Act was created for.


If you watched any of the public Cohen hearing.
It was on display in Toxic Mob tons.

Odd you bring up Kristol.

O Donnell just had to have him and another republican toilet crank on air. To discuss a "runaway" child of Kristol and how his child left him for Jim Jones.