Time Travel on a Budget


I wonder what I was writing about a year ago?


The Party By The River

...
As a final gesture of goodwill, you were sent the chance to step up and appoint a well-qualified, universally respected, straight-down-the-middle jurist to replace the late and unlamented Antonin Scalia.

Instead told told the President of the United States to pound sand.  That once again you would rather abdicate the most basic function of self government and leave the seat vacant for a year so that this guy could fill it.


And now you stand in the middle of the wasteland you created and demand to know why no one saved you? 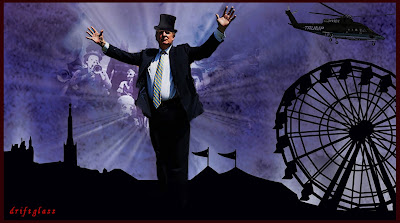 Something stupid this way comes.


Charles Halloway: I know who you are. You are the autumn people. Where do you come from? The dust. Where do you go to? The grave.

Mr. Dark: Yes. We are the hungry ones. Your torments call us like dogs in the night. And we do feed, and feed well.

Charles Halloway: To stuff yourselves on other people's nightmares.

Mr. Dark: And butter our plain bread with delicious pain. So, you do understand a little.


Once again our elite media is looking-with-alarm at the latest beast to lurch out of the GOP monster factory.

Once again they pretend to be appalled by the symptoms of the plague that is ravaging our democracy, and once again they dare not name the causes of a pestilence which they helped to engineer, opting instead to dab daintily at the open, suppurating pustules that cover our body politic with damp, Both Siderist towelettes...


Dispatches From The New Confederacy


It was remarkably unremarkable to watch Roger Ailes' employees take a break from their wall-to-wall paranoid hysteria over that swarthy horde of armed, jackbooted Obama-led thugs who are always on the verge of coming to steal your freedumb...

...to give a soothing reach-around to a genuine, lily-white jackbooted thug who is actually, brazenly blasting freedom off the streets of Ferguson, MO.

After decades of aggressive self-lobotomizing, the Right has bred a political base so pliant that it can easily absorb frequent, tectonic changes in the Wingnut Party Line without ever noticing that the Fox-approved slogans they are chanting today are 180 degrees in opposition to from the Fox-approved slogans with which they were filling your email in-box yesterday.

Watching this phenomenon play out in real-time over and over again has become grotesquely, fascinatingly and depressingly predictable.


A Sermon on Conservatism

From Isiah, Chapter Five, "The Song of the Vineyard",

I will sing for the one I love
a song about his vineyard:
My loved one had a vineyard
on a fertile hillside.
He dug it up and cleared it of stones
and planted it with the choicest vines.
He built a watchtower in it
and cut out a winepress as well.
Then he looked for a crop of good grapes,
but it yielded only bad fruit.
“Now you dwellers in Jerusalem and people of Judah,
judge between me and my vineyard.
What more could have been done for my vineyard
than I have done for it?
When I looked for good grapes,
why did it yield only bad?
Now I will tell you
what I am going to do to my vineyard:
I will take away its hedge,
and it will be destroyed;
I will break down its wall,
and it will be trampled.
I will make it a wasteland,
neither pruned nor cultivated,
and briers and thorns will grow there.
I will command the clouds
not to rain on it.”

Conservatism went mad and died because of the crop Conservatives planted 40 years ago and have been lovingly tending ever since.

They sowed the wind and are reaping the whirlwind.

All else is merely commentary.

Who Is John Galt?


...
And right there -- right at the point where Paul Ryan states categorically that "Atlas Shrugged" (which Paul Ryan "really enjoyed" so much that he made his staff read it and handed copies of it out as Christmas presents) is "different" than Ayn Rand's philosophy "called Objectivism" (with which Paul Ryan "completely disagree[s]") -- is where Mr. Ryan knowingly tells what may be the biggest and most consequential lie any Presidential or Vice Presidential candidate has told in recent memory.

It's not just that "Atlas Shrugged" was written by Objectivism's inventor and chief spokesperson. Oh my no. It's that the novel's philosophical apogee and most memorable element -- that deadly, long-ass "This is John Galt Speaking" slab of awful that swallows up 64 pages of its pages -- was consciously designed by Ayn Rand to be a comprehensive introduction to her Objectivist philosophy -- a philosophy which excoriates those who claim to act out of a religious faith that teaches charity and mercy as mere dictators and degenerate "mystics" whose only "craving is to kill" and whose "only satisfaction is to torture":
...

“Every dictator is a mystic, and every mystic is a potential dictator. A mystic craves obedience from men, not their agreement. He wants them to surrender their consciousness to his assertions, his edicts, his wishes, his whims-as his consciousness is surrendered to theirs. He wants to deal with men by means of faith and force-he finds no satisfaction in their consent if he must earn it by means of facts and reason. Reason is the enemy he dreads and, simultaneously, considers precarious: reason, to him, is a means of deception, he feels that men possess some power more potent than reason-and only their causeless belief or their forced obedience can give him a sense of security, a proof that he has gained control of the mystic endowment he lacked. His lust is to command, not to convince: conviction requires an act of independence and press on the absolute of an objective reality. What he seeks is power over reality and over men’s means of perceiving it, their mind, the power to interpose his will between existence and consciousness, as if, by agreeing to fake the reality he orders them to fake, men would, in fact, create it.

“There is only one state that fulfills the mystic’s longing for infinity, non-causality, non-identity: death. No matter what unintelligible causes he ascribes to his incommunicable feelings, whoever rejects reality rejects existence-and the feelings that move him from then on are hatred for all the values of man’s life, and lust for all the evils that destroy it. A mystic relishes the spectacle of suffering, of poverty, subservience and terror; these give him a feeling of triumph, a proof of the defeat of rational reality. But no other reality exists.

“No matter whose welfare he professes to serve, be it the welfare of God or of that disembodied gargoyle he describes as ‘The People,’ no matter what ideal he proclaims in terms of some supernatural dimension-in fact, in reality, on earth, his ideal is death, his craving is to kill, his only satisfaction is to torture.

“Destruction is the only end that the mystics’ creed has ever achieved...

Question: How do you know this?

Question: But why should we take your word for it, driftglass? After all, isn't this just the sort of thing that a skeevy Liberal collectivist parasite such as yourself would lie about?

Answer: Well, duh! Fortunately you don't have to take my word for it. In fact, any idiot with a browser and access to the internet (I'm looking at you, David Gregory) can look these exciting facts up for themselves because the good people at "The Atlas Society" -- the organization to which Paul Ryan delivered the following speech in 2005 during which he explicitly states that he "goes [back to] the 64-page John Galt speech" whenever he needs to check his ideological bearings (at around the 3:30 mark) --


-- has an entire page devoted to painstakingly tongue-bathing John Galt's speech and explaining its Pure Objectivist Awesomeness in excruciating detail...

Now that's how you write a headline.

WAILUKU - Presidential candidate Newt Gingrich spoke about his core values to about 150 applauding TEA Party of Maui members Saturday during a brief campaign tour of Hawaii.
...

"The current president is the best food stamp president in American history," Gingrich said to the packed room in the back of the modest church. "I would like to be the best paycheck president in U.S. history."
...

If Gingrich were president, he said, he would dismantle most of Obama's policies by issuing "50 to 200 executive orders right after my inauguration."

Gingrich said part of the problem is that the president is guilty of dividing the country. He accused Obama of halting job growth by pitting corporations and the wealthy against the rest of the country.

"You cannot create jobs with class warfare and bureaucratic socialism going on," he said.

"Social responsibility", if you were unaware, is Smartest-Man-In-America-speak for "I only fuck one mistress at a time."

I guess we can look forward to reports of the Gingriches dazzling small clutches of crazy white people at key resort-and-shopping-adjacent serial vacation spots battleground states until his stake horse's money runs out he sweeps to victory...just like he mesmerized this wee conclave of bored Maui-ites...


I'd go on with this journey down mid-August Memory Lane all the way back to 2005, but the existential whiplash and nausea from the return trip is hell on the nerves.

Can this be filed under:
Plus ça change, plus c'est la même chose