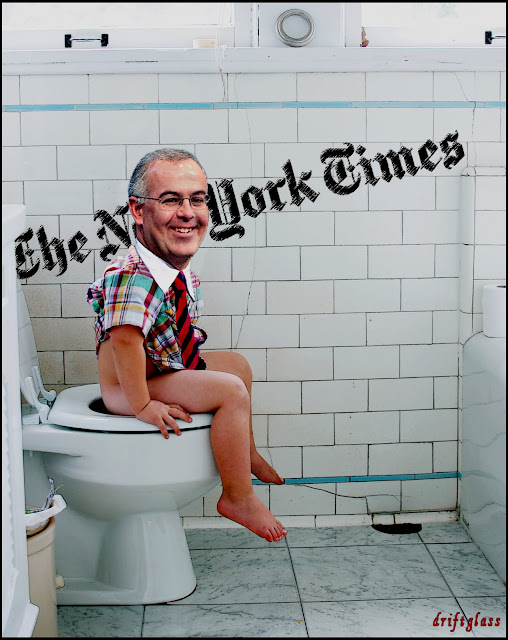 Two weeks ago I made a simple prediction about America's Most Ubiquitous Conservative Thought Leader, Mr. David Brooks:

This was the headline David Brooks column in America's newspaper of record the very next day:

Two weeks later, and this is the headline of Mr.  Brooks' column in America's newspaper of record today:

Mr. Brooks remains deeply  impressed by Ms. Fiorina's skills with the most important weapon in the Conservative arsenal:  lying.

And you can sort of understand why.

After all, Mr. Brooks' career is just as dependent as Ms. Fiorina's on selling the public one flimsy fraud after another.  But where Brooks protects his fragile bullshit by various acts of poltroonery -- cowering behind his column and his fellow Both Siderist co-conspirators and staying the hell away from any venue where there is even the remotest chance anyone would ever challenge his twaddle -- Fiorina marches right in to the arena, look straight into the camera and lies ferociously and relentlessly

For someone as fundamentally chickenshit as Brooks, Fiornia's performances are electrifying:

...
Carly Fiorina’s presidential campaign has been built on confrontational moments. With impregnable self-confidence and a fearless intensity, she has out-Trumped Trump and landed the most telling and quotable blows on Hillary Clinton.


In such a giant field of candidates what matters most is the ability to grab the spotlight. The era of YouTube and FaceTime video links has further magnified the power of a candidate who can create significant moments. Fiorina is great at it, perfectly suited to this environment.

She can go on MSNBC or some other outlet and bludgeon a host with a barrage of forcefully delivered bullet points, which then goes viral...

Of course, now that he is all nekkid and thrilled with a lil' stiffy which hasn't flown at more than half mast since the good old days when Mr, Brooks gleefully hammered the shit out of Dirty Hippies from the safety of Dubya's swaggering codpiece,  Brooks has to pour vinegar on the moment by offering the candidate some of his famously horrible political wisdom.

Predictably, the most obvious piece of soul-saving advice which one would think the author of "The Road to Character" would be giving to a pathological liar like Fiorina -- namely "Stop Fucking Lying!" -- is an area which Mr. Brooks rockets right on past (emphasis added because Mr. Brooks bending himself across seven dimension to avoid stating the simple truth is hilarious):

In contrast to Clinton, Fiorina simply refused to adopt a defensive posture. She ignored the challenges and just hit Planned Parenthood harder. The factual issue sort of got lost in her torrent. She was stylistically indomitable even if she didn’t address the substance of the critique.

Again, this is not hard to understand.  Since Mr. Brooks' career is every bit as dependent on a farrago of fabrication and fairy tales as every other Conservative bunco artist including La Fiorina, Mr, Brooks knows full well that if he and his fellow grifters suddenly start calling each other out on their fidelity to the truth, everybody loses.


Instead, Mr. Brooks opts to fuss about Ms. Fiorina's lack of nuts-and-bolts policy proposals to address the problems of the American middle class:

Most tellingly, she made the classic marketer’s error, letting her promises get far out in front of reality...


But history teaches that parties invariably nominate government officials. Sooner or later, voters want a candidate rooted in something more than a marketing strategy. They want someone authentically connected to middle-class concerns and with strategies for their specific challenges, like wage stagnation.

This is where I must lay my pencil down and move on to other things, like continuing to hunt for a full-time job in spite of the increasingly depressing odds. Because for the moment I lack the words to adequately express my total fucking awe at the sheer scope and grandeur of Mr. Brooks' mendacity.  Once again Mr. Brooks of the New York Times, PBS, "Meet the Press", TED Talks, The Aspen Institute, Yale University and NPR has walled himself up inside his Whig Happy Place to write about the behavior of an entirely fictional Republican Party which suddenly cares deeply about the concerns of the middle-class and which punishes candidates for letting their promises get far out in front of reality.

Once again, for the purpose of selling one more bullshit fairy tale, Mr. Brooks has simply zapped the entire, inconvenient history of his Republican Party out of existence.


And once again, no one but a handful of disreputable bloggers scraping by in the media badlands is going to say a word about it.
at October 02, 2015

HEy,
Fiorina and Carson have to be there. We all know why!

Fiorina did not lie about "everything in her debates after all.
When Carly said, "I did very well at HP" She was accurate. The company,employees and all concerned might not have. So "she" did well at everyone else's expense.
Like the Wall Street Bailouts.
Doing simple math of addition.
Rubio learns to wait out an issue to see if he can keep it alive long enough to extract its body parts for his campaign.

"Sooner or later, voters want a candidate rooted in something more than a marketing strategy."

Man, that sentence alone proves David is indeed a right wing apologist white washing conservatism for Upper and Upper-middle class professionals who don't want to be held responsible for actions of their parties base OR their elected representatives.

Republican voters are currently rooting for whomever's platform is the most hateful revenge plot against liberals and brown people. They aren't going to wake up next October and say "Hey, we need a reasonable person. Someone rooting in civics with a strong sense of policy and international affairs. I don't have to always agree the person, but the nation needs such a leader!"

You had me at "poltroonery"...

"The era of YouTube and FaceTime video links has further magnified the power of a candidate who can create significant moments."

He doesn't seem to know what FaceTime is. It probably sounded good and mod to him.

"The power of the tele-phone will no doubt propel Candidate Taft to an ever greater audience."

For some reason DFB's semi-porno paean reminds me of the scene in The Grifters where Annette Bening reminisces to John Cusack about the beauty of "the long con" her ex-boyfriend pulled during a stock manipulation scheme in Texas. That is, before he went mad.

There certainly is the same open admiration of a fellow charlatan's ability to get away with lying.

Carly reminds me of nothing so much as Maxwell Smart in the old Get Smart! TV series, "Well, would you believe . . . ?" Smart, I have always thought, was a masterful impersonation of a sociopath - the truth doesn't matter, what matters is what works!

Which is, incidentally, of a piece with Carly's selling-baby-pieces schtick. The truth doesn't matter, what matters is what works! Gee, it's almost like she came out of sales and marketing.


Gingrich: "It doesn’t matter what I do. People need to hear what I have to say".
This is what was placed in the GOP political campaign arsenal. By Newt.

When you propagandize people, this can be very effective. Even the egotistical Hypocritical Newt decided that out right lying. doubling down, quadrupling down on that same lie. Allows the David Brooks to swing his shiny watch and put you to sleep at the least.

This is how you had Gingrich holding his Speaker-ship while boinking out of wedlock at the same time he decrying purity. Led the Clinton impeachment.

You can see Rep. Mcarthy on the TV doing damage control. But he is not using Gingrich's teachings. Instead he is trying to walk back, :what I really meant", etc, etc,

After reading a post from a tech wonk on how Jobs skinned Fiorina alive on an I-pod deal, I wouldn't trust her to negotiate with my paperboy. She is as stupid as any other moron on the bus, except she is worse at management. Walker used to have my title as the worst nightmare for America, Carly has taken the crown and wears it proudly.