At The Smarmy McCarthy Hearings


I Learned It By Watching You!

Ever mindful of the Gingrich Rules, return briefly with me to last weekends' most overlooked gob of pure, media slovenliness to be found anywhere in the Seven Kingdoms -- this exchange between Martha Raddatz and Newton Leroy Gingrich.

RADDATZ: You, of course, resigned the speakership in '99. What's different here?

GINGRICH: I'm not sure a lot is different. John and I both faced the fact that there was a hardcore group, sort of a minority of the party, who were prepared to cause total chaos. In my case, they had announced they would never vote for me for speaker, and I'd never get to win a smaller majority, I'd never get to the 218. And so you just have chaos in the House...

At this moment, literally the easiest thing in the world for Ms. Raddatz to do would have been to simply take Murrica by the hand and go for a little stroll down memory lane.

So of course she did no such thing.

But if we lived in a Better Universe.  A Universe where journalists did such things...

The year was 1990, and night after night in a corner office at the Center for Advanced Wingnut Studies, two up-and-coming Republican sociopaths work diligently to synthesize a magic formula that would help them take power. And after months of research, they discover the secret to making all of their dreams come true: lying all the time in front of every microphone and camera you can lay your grubby paws on.

In 1990, after consulting focus groups[37] with the help of pollster Frank Luntz,[38] GOPAC distributed a memo with a cover letter signed by Gingrich titled "Language, a Key Mechanism of Control", that encouraged Republicans to "speak like Newt" and contained lists of "contrasting words"—words with negative connotations such as "radical", "sick," and "traitors"—and "optimistic positive governing words" such as "opportunity", "courage", and "principled", that Gingrich recommended for use in describing Democrats and Republicans, respectively.[37]

And so, with the help of a ceaseless stream of slander and the powerful new medium of Hate Radio, Gingrich and a horde of radical, bomb-throwing lunatics swept to power.  Over the next several years, Gingrich would become famous for deploy every filthy, ratfucking dodge in the book to destroy his political opponents -- from ginning up fake Congressional show trials to shutting down the federal government -- but to wage berserker attacks on all fronts every day he needed to install a team of hard-core, corrupt, fellow-travelling fanatics who were as committed to wrecking America's capacity for self-governance as he was.

From 1995 to 1999, [John] Boehner served as House Republican Conference Chairman which is the party caucus for Republicans in the United States House of Representatives. In this post, he was the fourth-ranking House Republican, behind Gingrich, Majority Leader Dick Armey and Majority Whip Tom DeLay.

And thus did Gingrich and Conservative talk radio begat the Modern Republican Hate Machine, which only turned on its creator when his promise that Murrica would rally to his Impeachment banner collapsed:

In 1998 Republicans lost five seats in the House—the worst midterm performance in 64 years by a party not holding the presidency. Gingrich, who won his reelection, was held largely responsible for Republican losses in the House. His private polls had given his fellow Republican Congressmen a false impression that pushing the Lewinsky scandal would damage Clinton's popularity and result in the party winning a net total of six to thirty seats in the US House of Representatives in this election.[86] The day after the election, a Republican caucus ready to rebel against him prompted his resignation of the speakership. He also announced his intended and eventual full departure from the House in January 1999.[87] When relinquishing the speakership, Gingrich said he was "not willing to preside over people who are cannibals"...

And thus the Modern Republican Hate Machine continued to roll merrily along.  Lurching violently and constantly Right, fueled by increasingly toxic doses of paranoia, rage and bigotry and crushing anyone who gets in its way or who doesn't qualify as "Conservative enough" as measured by the machine's demented barometer, but still running the same basic software it had back when Gingrich wound it up and set it in motion:  shutdowns, show trials and a never-ending torrent of absolutely insane lies, repeated as holy scripture to and by the Base over and over again.

Until, finally, the Modern Republican Hate Machine arrives at the present day and begets a Kevin McCarthy:  an empty-headed party apparatchik so thoroughly conditioned to think like a thug and brag like a pimp that he has no concept of a wider world where what comes out of his face hole may be considered horrifying.

And where did lil' Kevin learn such bad habits?

He learned them by watching you! 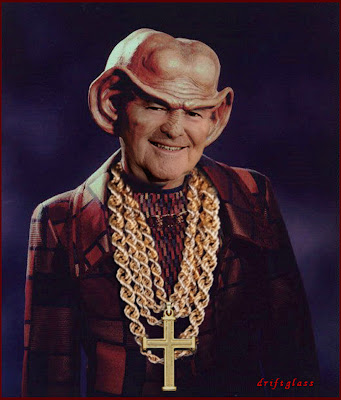 Just when I am ready to concede there is no hope for humanity:

When even the Pope runs an "inclusion for all" scam on the American public and shoots us a bird on his way out the door;

When providing birth control and abortion choice is labeled murder even as having children you can't support is criticized when jobs paying a living wage are non-existent for the badly educated lower classes;

When international diplomacy put forth by our President is derided as weak while Greed Master Trump is taking victory laps around his growing number of boondoggled supporters shouting, "Round 'em up! Bomb 'em! And kill fat, ugly womens"...

I stumble upon you, such a comfort as I observe the gathering storm of the willfully ignorant and astonishingly corrupt, not to mention, frighteningly brain-damaged.

Thanks, and thanks again. If it's too late for hope, it's better to go down laughing than crying.

"Remember Red, hope is a good thing, maybe the best of things, and no good thing ever dies."

And at the risk of being as soppy as Dottie {:)},it's fabulous writing like this that has given hope to the left for the last twenty years.

That, and the continuing struggle of good men like Obama and Sanders.

What Dottie and Waldo said.

"Teacher of the Rules of Civilization
Arouser of those who Fan Civilization
Organizer of the pro-civilization activists.
Leader (Possibly) of the civilizing forces"

...owner of an ego that reaches from Georgia to the site of his proposed moon colony.

". . . Gingrich titled "Language, a Key Mechanism of Control", that encouraged Republicans to "speak like Newt" and contained lists of "contrasting words"—words with negative connotations such as "radical", "sick," and "traitors"— . . . "

Why this is almost like that German guy, you know the Father of Propaganda.
Coincidence or fun fact? You decide.
[Can't mention him or his boss - you know, the Godwin Rule. Newt could though.]

It doesn't violate Godwin's Law if the malefactors whom one is denouncing actually are using Ratzi methods.

Goebbels was the "Father of Propaganda"? Nah, he was an apt pupil of Edward Bernays.

A more simpler theory,
When then Governor Ronald Reagan of California closed down all the mental institutions and turned loose all the up and coming mass murderers,sadists. You name it.
With no place to go and no metal health care they desperately needed and Off their medications.
They gravitated to the GOP. Many more already diagnosed with schizophrenia and other disorders. Wingnut media attracted them like a vampire to flowing human blood.

I would like someone in the media interview a Tea Party (Taxed enough already) 3 cornered hat patriot and ask him, How do you approve of spending tax dollars on socialistic public financing in the name of the Benghazi Select Committee?

Raddatz came from NPR which is rife with false equivalency today. However, during the halcyon days of the Hunting of President Clinton I'll never forget former ATC host Linda Wertheimer talking about the "damage Bill Clinton did to the Presidency". Thus, began my long ascent out of the quagmire that is their anchor news shows.

Anyone else notice the irony of this Congressman being named "McCarthy" and he was the one who shamelessly admitted the hearings were a political witch hunt?

God's getting awfully corny with Its writing. Maybe It's dumbing down the story for the audience.

And yours most of all, Dg.