Day 2,912 of David Brooks' lonely, one-man quest to use his privileged position at the New York Times to insist that everyone is paying too much damn attention to those damned dirty hippies.

David Brooks: Gail, can we talk about the overhyping of the Occupy Wall Street movement?

This time around, Bobo has gone Full Metal Ahab because #OWS combines the three things Our Mr. Brooks hates most in the world:

And so, gravid with bile, Our Mr. Brooks deploys every weapon at his command against the unkempt horde of conspicuously non-millionaire, non-Republicans, beginning with the ever-popular condescending-contempt-seasoned-with-vague-implications-of-great-danger...

Sure, they are photogenic, and they do have some grievances, but it is extremely dangerous to extrapolate from the protests to the wider country.

...followed by reading his own biases into the results of dubious polls (emphasis added)...

Kuziemko and Norton explain the unpopularity of redistribution among the working class to “last place aversion.” People in second to last place in any ranking system don’t want to help the people at the bottom because then they themselves would fall to last. I think that’s the wrong explanation. It goes back to values. Americans, especially those in precarious circumstances, want to see the moral fabric restored, and the essence of this — that effort should be linked to reward and redistribution — seems to muddy that moral fabric, even in harsh times like these

Just as with his fierce support of the Republican disaster that was the invasion and occupation of Iraq, Our Mr. Brooks' entire arsenal consists of little more than viperish contempt, ominous hints of Grave Danger if we don't do things Our Mr. Brooks' way, cherry-picking data, and lying.

Oh, and the one tool 99.9999999999999999% of the rest of us do not have in our toolbox: the ability to repeat his bullshit year after year -- unchecked and unchallenged -- using one of the largest media megaphones in the world.

For a wealthy, craven, gated-suburb, melanin-challenged Conservative like Mr. Brooks, the actual record of his Movement and Party -- its long, well-documented and very successful history (Hi, Rick!)

of courting an entire menagerie of racists, crackpots and borderline mentally-ill religious freaks in order to win election -- is like Sybil's Green Kitchen: a horrifying truth about how they got to be who they are that they dare not admit even to themselves.

Just as he simply ignores the myriad polls that show overwhelming support for taxing ultrawealthy Americans to help pay for some of the upkeep on infrastructure of the country that made them wealthy in favor of one poll that says people don't like "redistribution".

Ignores the underlying and ancient po' white trash need to feel superior to those one-rung-down from them on the economic ladder -- a pathology brilliantly captured here in Gene Hackman's "May daddy killed that mule" speech from "Mississippi Burning" (h/t Batocchio).

Ignores the plain, clear language of the GOP's Master Racist -- Lee Atwater -- when he described exactly what GOP base-voter buttons are being pushed when their leaders wink and nod and dog-whistle about redistributive programs:

You start out in 1954 by saying, "Nigger, nigger, nigger." By 1968 you can't say "nigger" — that hurts you. Backfires. So you say stuff like forced busing, states' rights and all that stuff. You're getting so abstract now [that] you're talking about cutting taxes, and all these things you're talking about are totally economic things and a byproduct of them is [that] blacks get hurt worse than whites.
...

Likewise, Mr. Brooks ignores his Conservative Movement's virtually perfect record of being loudly on the wrong side of every important social, political, cultural and economic issue during his entire adult life by simply collapsing all of America's civil rights, worker's rights and anti-war movements into a single word -- "Woodstock" -- and then asserts that "Woodstock" was the reason for the the rise of his New Republican Party.

An assertion which Ms. Collins effortlessly eviscerates like so:

However, the people who were there were the same folks who gave the country a good chunk of the civil rights movement, the women’s movement and the anti-war movement. I’d rather take credit for that than Ronald Reagan and the Bushes.

A quick review, Mr. Brooks (who I know reads these little missives of mine):

Here is a picture of some people participating in one of those "protest movements" that makes you so squirmy. 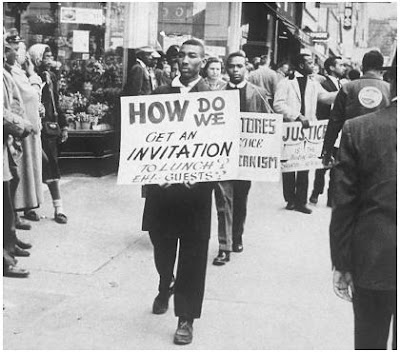 And here is a picture of some people who watching and disapproved of those protests. 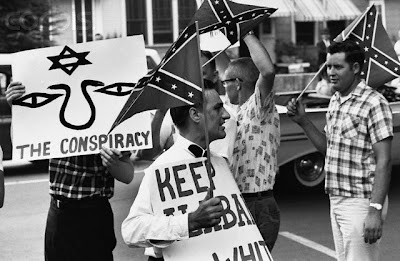 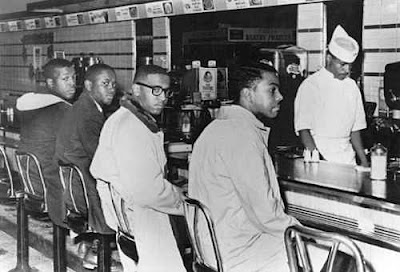 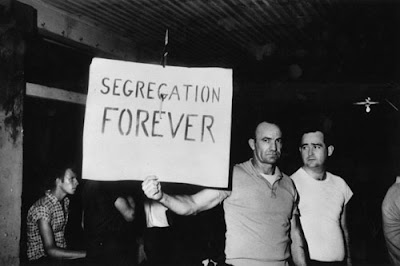 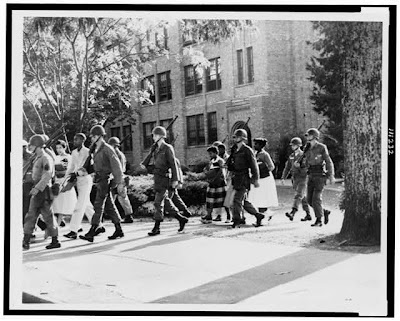 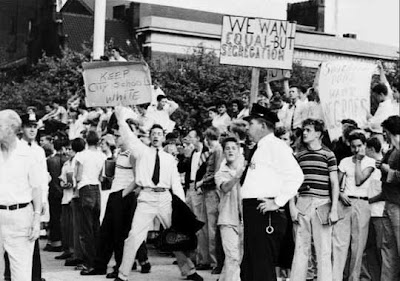 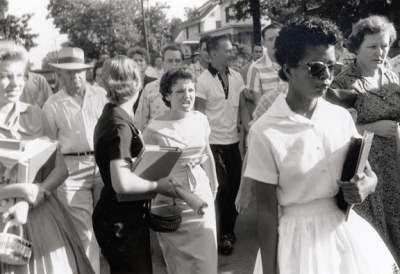 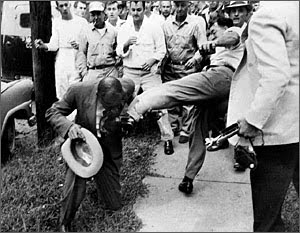 And that is Mr. Brooks' real problem: his reflexive hatred for people who raise their voices coupled with his feverish fealty to a sack full of utterly-discredited Centrist hokum demands that he remain in a constant state of cowering denial about everything vital and important that is going on in the world around him.

Like any other Conservative con artist -- like Limbaugh or Beck or Palin -- without his lies, Brooks has nothing and is nothing.

But unlike Limbaugh or Beck or Palin, the harshest condemnation for Mr. Brooks' particular brand of puerility can come not just from dirty, irrelevant hippies like me out on the be-fringed edge of nowhere...

...but from the dead hand of the patron saint of the Far Right herself (about whom I have also written once or twice things):

There are two sides to every issue: one side is right and the other is wrong, but the middle is always evil. The man who is wrong still retains some respect for truth, if only by accepting the responsibility of choice. But the man in the middle is the knave who blanks out the truth in order to pretend that no choice or values exist, who is willing to sit out the course of any battle, willing to cash in on the blood of the innocent or to crawl on his belly to the guilty, who dispenses justice by condemning both the robber and the robbed to jail, who solves conflicts by ordering the thinker and the fool to meet each other halfway. In any compromise between food and poison, it is only death that can win. In any compromise between good and evil, it is only evil that can profit . . .

When men reduce their virtues to the approximate, then evil acquires the force of an absolute, when loyalty to an unyielding purpose is dropped by the virtuous, it’s picked up by scoundrels—and you get the indecent spectacle of a cringing, bargaining, traitorous good and a self-righteously uncompromising evil.

Or, if you prefer your David Brooks in smaller doses:

Given Mr. Brooks' belief that he understands exactly how Americans think, I was going to suggest nicknaming him, "Captain America".

But to be accurate, it's more like "Captain 1% of America".

Maybe he can punch a hippie in the jaw, rather than punch Hitler (like Captain America did).

The photo essay "Marchers/Watchers" is just brilliant. It would have stopped William Buckley in his tracks as well as Brooks, who comes in his tone from the same arch, arrogant, superior place. Thank you so much for putting this piece together.

Jeez, Brooks seems to really be decompensating once you wade past his morass of stats and scientific evidence and all. He's starting to shred his own fake-ass "I'm Mr. Superior Middle and I'm always Right" image. Think the Times folks will finally notice when he finally has his Lonesome Rhoades moment?

What Bobo despises the most about the OWS people isn't their DFH status, or even their potential threat to his glorious pre-feudal status quo ... it's that he can barely dream of achieving a 70%-plus approval rating among his fellow Yanks after more than a decade spent suckholing for dear life, while they got it in a matter of weeks via the simple expedient of honest integrity that he so signally lacks.

As I've said about most of your previous posts, this is the best one yet. How do you keep topping yourself? The Marchers and Watchers theme distills the political dynamic we're struggling with today perfectly. Brooks is a watcher and you are a marcher. You're on the right side of history and 20 years from now DFB will be claiming to have been calling himself David Fucking Brooks from day 1.
Who knew there was only 1 degree of separation between DFB and Kevin Bacon?

If David Brooks has any "sacred honor", I want to grind it into dust.

This "reflexive hatred for people who raise their voices" must be deeply rooted in primate group psychology.

It fuels the malicious spite on the right. "How dare you buck the alpha, when we have been submitting!".

This is quite possibly the very best blog post I've ever read on any subject.