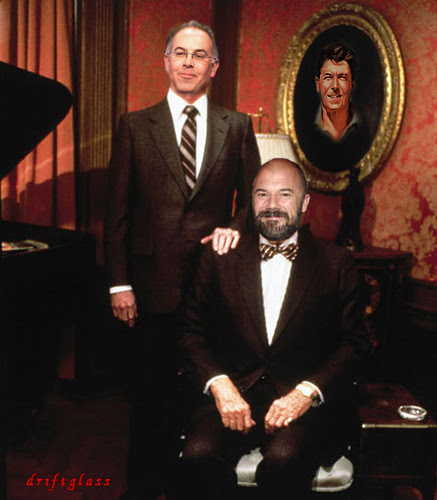 Over at the minimum security Conservative Prison Planet, the inmates continue to argue with the trustees over the color of the drapes.

After praising a Rich Lowry column on the plight of working Americans, David Frum practically begs his former colleague to have the courage of his convictions:

Rich, if you take these concerns seriously as a writer and thinker – then take them seriously as an editor. Challenge your readers. Fix their attention. Urge them to see what you see. Emancipate them from pretend information and false ideas. Use your platform. ...

It would be fun to see National Review commit as a magazine to challenging its audience. Surveying the outlets that are making money on the right, however, is to understand how difficult it would be for Lowry to go that route. Once again, the financial incentives and intellectual health of movement conservatism are in tension.

Any sentence that begins "After praising a Rich Lowry column..." should have no place in American journalism. It exists solely because of a confluence of two of the things Conservatives love best: prostitution and tricksie games to add value to something which is objectively worthless.

Consider the "praisee" here -- the Moral Default Swap that is Rich Lowry: a viperish little twat who has never been anything less than a moral dumpster fire, but who continues to be treated as a item of value in the media universe.

Because he edits a magazine full of fellow Conservative traveler's peddling their mildewed tripe...and because he appears on teevee.

Teevee is the corrupt bond-rating service in this formulation, and every time this bag of ass shows up on "Meet The Press", his value as a trade-able media Moral Default Swap goes up.

And David Frum -- the "praiser" -- continues to exist for much the same reason: a staunch backer of virtually every slimy, horrid Conservative crackpot idea spawned by the Bush Administration, Frum stepped off the reservation once, which triggered his fall from grace from the Main Conservative Gravy Train...which landed him in the lap of another, lesser Conservative scam. He continues to exist because virtually every single day, his friend Andrew Sullivan is only too happy to loan him a portion of the platform which, in turn, "The Atlantic" magazine, "The Chris Matthews Show", "Real Time with Bill Maher", etc. loans to him.

Frum and Lowry: two objectively valueless lumps of FAIL, repeatedly revarnished with a patina of counterfeit credibility by the same gatekeepers of media access, and then resold to the same credulous rubes over and over again.

So when Andrew Sullivan says "...the financial incentives and intellectual health of movement conservatism are in tension." what he means is that, while Conservatives and their faux Centrist enablers may be willing to pay just about any Fox back-alley Conservative crack whore to tell them what they want to hear...they are willing to go to the top shelf, break their kid's piggy bank and pay premium prices if they can get a minor celebrity with a high "legitimate media" burnish to polish their ideological knob.

Still, while it is a pity that epic, serial failure continues to have no consequence for anyone anywhere on the Right as long as they have the right connections, it is hard to argue with the financial success of that strategy (from the NYT):

Since 2005, revenue at The Atlantic has almost doubled, reaching $32.2 million this year, according to figures provided by the company. About half of that is advertising revenue. But digital advertising — projected to finish the year at $6.1 million — represents almost 40 percent of the company’s overall advertising take. In the magazine business, which has resisted betting its future on digital revenue, that is a rate virtually unheard of.
...

They lured Andrew Sullivan away from Time.com in what proved to be a major coup. Today Mr. Sullivan’s blog, The Daily Dish, accounts for about a quarter of TheAtlantic.com’s monthly unique visitors, which reached 4.8 million in October.
...

As Susan of Texas pointed out, no mention of the contribution that the salons had both directly and indirectly on profitability...

I wondered if you had picked up on the profit announcement...silly me.

I had a dream, or a nightmare, last night that I met David Brooks.

I don't know how the dream started, as is the case with dreams, but we were attending some swanky cocktail party.

I had jeans on and Mr Brooks (in an expensive suit) asked me what I did for a living. I told him I was unemployed (again). He smiled wide and asked why that was. I don't remember what my response was.

I asked him how gets his ideas on what to write. He told me "It just comes to me."

After I told him I thought he was a fraud and a hack. He started getting agitated. He told me that there was a reason why I was unemployed: My Bad Attitude.

I punched him in the face a few times and my alarm went off.

I woke up and started applying to more jobs that won't respond to me.

"Teevee is the corrupt bond-rating service in this formulation..."

Best metaphor of the day. I remember when CNN put the lunatic Pamela Geller on to talk about the "Ground Zero Mosque"

This post is about as good a reason as I have ever seen why liberals should not breed.