Beware the Ides of Marge 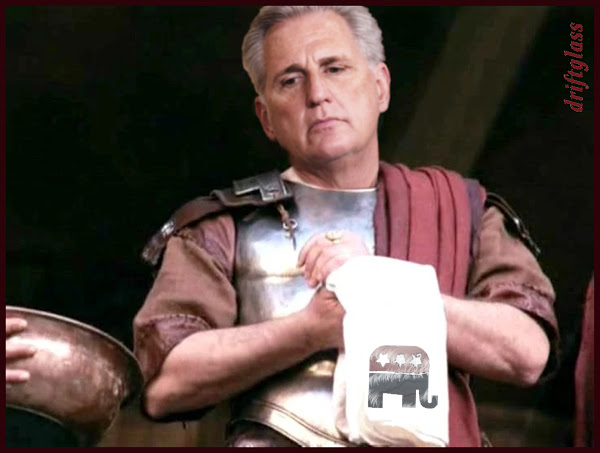 “Ms. Greene, in turn, has taken on an outsize role as a policy adviser to Mr. McCarthy.”

Kevin McCarthy, the doomed horcrux of a dying party, really, really needs to brush up his Shakespeare --

-- to understand what's coming for him sooner or later.

So many lines to choose from just from Julius Caesar --

The fault, dear Brutus, is not in our stars, but in ourselves.

-- that are so apt they can be quoted verbatim and are as fresh and apt as the day they were written:

What a terrible era in which idiots govern the blind.

And other lines that positively beg to be played with just a little. Such as:

Cowards die many times before their deaths;
But if they're cowardly enough, the get to be the Republican Speaker of the House..

The evil that Republicans do lives after them.

Yond Gaetz has a lean and hungry look.

And of course the very last words out of McCarthy's mouth just before Marge puts the political knife in:

Email ThisBlogThis!Share to TwitterShare to FacebookShare to Pinterest
Labels: republican

I'm starting to suspect that Kevin McCarthy doesn't give a damn about policy, he's just obsessed with the fancy office and the title. We now live in a country where the second guy in line to the Presidency is basically GOB Bluth. MTG can promote the most extreme, destructive, bat-shit insane type of politics imaginable and he's cool with it as long as she votes for him for Speaker. And she's just using him to get her damn committee assignments to raise her profile. Its truly jaw-dropping how ugly and empty their politics are on the right. There is a word for the Republicans we're dealing with right now that's been around since the early 19th century:

Kakistocracy
A kakistocracy is a government run by the worst, least qualified, or most unscrupulous citizens.

Does Vegas bookies have a odds line on how long Kevin can remain speaker?

These republicans are all Reagan's fault.

When Ronald Reagan was governor of Calif.. He ordered all the state mentally insane hospitals (the nit sanitariums) to close.
Sending most of them out on the streets. some grouped together. They began breeding. And, the insanity was passed on to their children. How some of them like MTG got to Georgia and how they congregated all in her district is baffling.
Don't believe me? Then just ask George Santos.