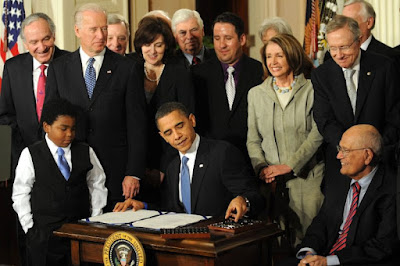 
Don't forget to visit our website -- http://www.proleftpod.com -- for all those sweet bells and whistles:  there are links to donate to our podcast work at that site, as well as links to our swingin' Zazzle merch store,  our respective blogs, Twitter, Facebook, Kittehs! and much more. Many thanks once again to @theologop for her invaluable support!

No Fair Remembering Stuff is a Professional Left podcast production and is brought to you by our wholly imaginary "sponsors" and real listeners like you!

As someone who's way older than I ought to be to not know this stuff very well, thank you so much. This is painfully enlightening. Looking forward to the ACA cast.

Thanks for all you do.

Remembering when the GOP shouted at us how the communist/ socialist ACA (ObamaCare for republicans), would make lie Russia or N. Korea..

The ACA has been in effect for some years now and the only people cuddling up to Putin's loins is the republican party.

How that many right wing states have Expanded Medicaid in their states because of the ACA after refusing to be murdered by it . Are live , well and healthier.


I want many of those GOers to know (like Sen Grassley) who informed us in all conservative religious seriousness that the ACA will kills, "GRAND<A".

I want theme to know that when they said this, I recalled my mother, my grandmother, grandfather and grandmother had all died prior to the Obamacare having a chance to kill them and guess what. As a grand father/ great grandfather I am live well and fairly healthy because it is here.

Most of all, I recall their promise to repeal and replace with something much better and more affordable.

They voted to only repeal and never once showed any half formal replacement.
I recall, they did not repeal and did not get their hands on the ACA funds and when they moved on to their tax cuts for the wealthy. They had to borrow $2 trillion to pay out their tax cuts to the wealthy and leaving it on the national debt for working class to repay with interests.
They had to borrow because they
Oddly, I dod not recall any of the persuit of insanity going on in the house of REps. being
did not get the ACA fund to use for their tax cuts they had planed.

It's snowing like a bastard outside and so I'm stuck inside today, so I decided to use the time I would have used to walk up to the old mill pond and back to finally get around to listening to this episode of NFRS.
First, very well organized and clearly presented. Second, although I wasn't familiar with the actual details of it, I was aware of the main story line, and didn't really find any of it surprising.
I remember an old Obama interview where he said "I'll take better every time."
I kind of feel like those folks who are dissatisfied with anything short of Medicare for all either have really good insurance or are lucky enough to have never (yet, it's coming) had to deal with a major health problem.
Because of my major health problem (a stroke in '08) I now have Medicare, even though I'm only 62, and have had it for fourteen years.
Even so, the passage of the ACA in all of its complex, flawed glory is why I can see to type this. See, Medicare only pays 80% of your hospital bill, and that left a couple grand uncovered for the cataract surgery I needed back in 2015, so the Medicaid expansion got me in under the 122% of the poverty level cutoff and got my damn eyeballs fixed.
Now, in reality, I got the surgery at Highland Hospital in Oakland, and they probably would have found a way to get me in there, but as I was fucking blind and living in, uh, substandard housing, it made a big impression on me when they got it all done in under six months. Every day you're blind is an adventure, and not always the entertaining kind.
So I have an appreciation for the work it took to get that passed. While it was being worked on, I was busy trying to recover from the stroke, so I never really tuned out of the details like many of my friends seemed to, and all of the hospital stay and rehab for the stroke was pre-ACA, so that made it seem even more important to me. Sitting around in your wheelchair wondering how the quarter million dollar bill was going to get paid is stressful, and not very conducive to the recovery that was all I was ever going to get, while it was happening.
Thank you for the podcast, I'll try to figure out a free hour for the upcoming ACA episode.