10 Things I Hate About Trump: The Sequel 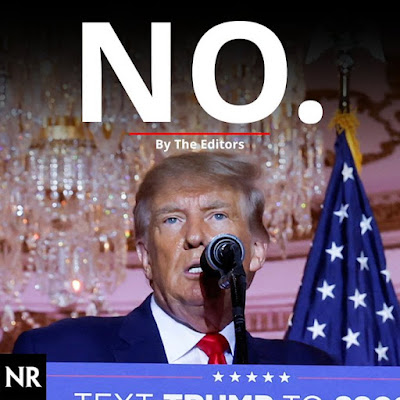 As I contemplated the National Review's bold November, 2022 cover story pictured above, I could not help but be reminded of this quaint and curious volume of forgotten lore: 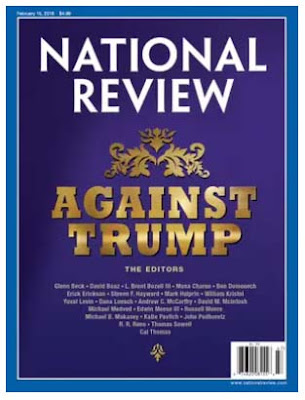 ...National Review and a group of conservative thought leaders took a strong stand against Donald Trump on Friday.

In a special issue titled "Against Trump," the 65-year-old magazine founded by William F. Buckley railed against Trump's "unmoored" and "opportunistic" populism. The editors published a scathing editorial on the GOP front-runner, while 22 conservative thinkers weighed in on why they think Trump poses a threat to American conservatism.

You might remember that shortly after Trump mowed down all the "respectable" Republicans who were running against him in the 2016 primaries, won the nomination and won the 2016 election, this same National Review folded like a freshly laundered Klan robe.

You see, the editor-in-chief of the National Review, Mr. Rich Lowry, was rumored to be deeply embittered by the fact that, with the rise of Trump, The Breitbart Collective had replaced his National Review as America's leading journal of White Supremacy.

Mr. Lowry had spent his entire career specializing in the kind of tasseled-loafer White Supremacy cloaked in a smirking, viperish ersatz-erudition that appeals to a small coterie of aging Republican gentry, while The Breitbart Collective -- with its blunt, front-page, in-your-face racism and conspiracy-mongering -- fed the debased and insatiable appetites of the massive, meathead base of the party.

And now the leader of the Breitbart clique, Steve Bannon, was seated at the right hand of President Stupid, while pretentious twats like Rich Lowry were forced to suck hind tit.

It was rumored that this did not sit well with Mr. Lowry, which is why, barely eight months into the Trump administration, we find him on the Meet the Press panel doing good service to Donald Trump by trying to "both sides" the Charlottesville Fascist March while being side-eyed into a pillar of salt by Joy-Ann Reid.

And thus, like the cornered rat he so eerily resembles, Mr. Lowry predictably scampered to the safety of the High and Holy Church of Both Siderism -- that well-fortified and amply-provisioned pundit safe-house which so many of Mr. Lowry's colleagues had labored so assiduously to create for occasions just like this (emphasis added):

If much of this sounds familiar, it might be because I wrote it up five years ago in this Sunday Morning Comin' Down post, in which I asked the question we all ask after every edition of Meet the Press: Why the fuck are hobgoblins like Lowry given any air time anywhere.

The answer, of course, is that hobgoblins like Lowry are to be found infesting every Sunday Show every week precisely because they are willing to look into a camera and smirk out bile like this.
And now, this:
Burn The Lifeboats

I'm not the first to say it and I better not be the last:

If you say you're "against Trump," well, if he DOES get the Republican nomination, are you going to vote for Biden, and write multiple pieces in your publication about how everyone should? Because in the real world conservatives like to pretend they understand, that's the only way you're actually stopping Trump from becoming president again.

You can use the phrase "lesser of two evils" if you're too stupid to see that's not true. But supporting Joe Biden is the only way you're actually "against Trump." Everything else is support.

And, they don't really care for Trump and his boorishness and crudities.
Like extorting foreign powers for personal gains, organizing
insurrection to strip other Americans of their rights and freedoms.

But, "I really like and agree with his policies". Policies they cannot explain past tax cuts for the wealthy and raising taxes on working class or cutting on the working class.

His policy of Mexico building the Wall. His policy of stealing prior budgeted specific funding from the military and Homeland Security to pay for the wall Mexico did not pay for.

You know, all these policies.

And the wind whispers BothSides

And the wind, it cries BothSides

Accomplishing the impossible can be turned around a bit to ask,

The most possible accomplishment that could be done to strengthen America right now,
The president nominates 4 Supreme Court Justices. All in one announcement. Zip zap the confirmation hearing and run TV ads how brilliant these justices are, more smatter than the Gorsuch or Kavy or comy.
Assembly line all of their confirmations and in one day vote and confirm each one.
The Senate Democratic majority do notate to break any laws, it is not nothing done before and there is no filibuster.
Fact is, it is nothing more than McConnell and GOP have exercised with their majorities and mostly in reverse. Remembers, McConnell erased the filibuster for SCOTUS confirmations. They have the majority.
Once confirmed, begin sending lawsuits to the high court on Citizens Used, the courts prior use of personal religion to ignore law and rule to remove Roe. It is boundless and it will be the court making rulings just like the court is doing now.

This would be the single most powerful things that can be done.
Like McConnell says, what good is power if you do not use it.

On a positive note,

When he tries to pretend he is still president when he is not.

It was a good laugh from deep in the belly when Trump had to admit he was not president when, He announced he was running for president.