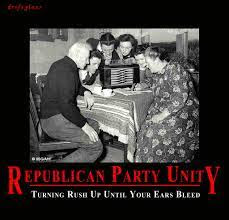 Today we do things in the proper order:  First the set-up, then the punch-line.

The setup:  Which MAGA rally was this recorded at and who said it?

That the people who are PAYING for the free stuff, Are being mean, prejudiced, and racist.

Now understand this. All great democracies have committed financial suicide somewhere between 200 and 250 years after being founded.  The reason?

We have one chance to change that in XXXX.

Failure to change that spells the end of the United States as we know it.

A Nation  of Sheep Breeds a  Government of Wolves!

Culture:  Constitution, and the Bill  of Rights!

NO  freebies to:  Non-Citizens!

We the people are  coming

The punch-line:  This was not recorded at a MAGA rally.

In fact this came over my transom before MAGA existed.  Before Trump was a glimmer in Steve Bannon's eye.  This comes from my archives from September of 2012, and refers to the upcoming 2012 elections.  A full decade ago, during what most recently-former Republicans in the media still rhapsodize as the Good Old Days.  And yet except for a "Where We Go Dumb, We Go All" tag-line and creepy theme music, it is indistinguishable from the deranged venom vomiting out of the mouth of the average Republican voter in 2022.

This is what I wrote about it at the time:

If you're like me (and why wouldn't you be), on any given day you get a whole clutch of THIS IS IMPORTANT FOLKS! (It's always "folks") forwarded to you from Crazy Uncle Liberty.

They are long on BIG FONT and short of "facts", these emails are, and judging by the embedding they have passed through the sweaty hands of many PATRIOTIC AMERICANS who READ THE CONSTITUTION before they reach my in-box, and if you can squint your way past the festoonage of American flags and giant, angry eagles holding assault rifles without laughing, you will be vouchsafed a privileged position from which to observe the screaming, batshit abyss of the wingnut soul (here is one of the tamer examples from my archives)...

Google a chunk of any of these missives and you will invariably find them all over the wingnut blogosphere like diaper rash, cropping up regularly on reliably crazy Conservative bilge-spigots with names like "Red State", "Free Republic", "Patriot Rising", "Barrons" and "The Wall Street Journal".  Then take two minutes to debunk any of these missives and you will get back grumbly complaints about factcheckers all being on the Soros payroll, or the boilerplate Centrist reply of "Libruls are just as bad or worse!" (here is another of the least racist/sweary samples from my archives)...

The point being, these were not the Good Old Days of the GOP that recently-former Republicans pine for.  The base was just as hateful, just as bugfuck and just as racist as the are now, but recently-former Republicans and the compliant mainstream media were more successful at lying about it.  The only thing that changed was that Donald Trump didn't outsource the job of activating the GOP base to professional mercenaries like Rick Wilson and Steve Schmidt,  Instead Trump spoke to them directly in the language they had already been groomed to respond to.

And they loved him for it.

You say you want more?  Well sure.  Because my archives are loaded with this stuff.  From the same September, 2012 post:

THIS IS SO INCREDIBLY WELL PUT AND I CAN HARDLY BELIEVE IT'S BY A YOUNG PERSON, A STUDENT!!! WHATEVER HE RUNS FOR, I'LL VOTE FOR HIM.

We have stuck together since the late 1950's for the sake of the kids, but the whole of this latest election process has made me realize that I want a divorce. I know we tolerated each other for many years for the sake of future generations, but sadly, this relationship has clearly run its course.

Our two ideological sides of America cannot and will not ever agree on what is right for us all, so let's just end it on friendly terms. We can smile and chalk it up to irreconcilable differences and go our own way.

Here is a model separation agreement:

--Our two groups can equitably divide up the country by landmass each taking a similar portion. That will be the difficult part, but I am sure our two sides can come to a friendly agreement. After that, it should be relatively easy! Our respective representatives can effortlessly divide other assets since both sides have such distinct and disparate tastes.

--We don't like redistributive taxes so you can keep them.

--You are welcome to the liberal judges and the ACLU.

--Since you hate guns and war, we'll take our firearms, the cops, the NRA and the military.

--We'll take the nasty, smelly oil industry and you can go with wind, solar and biodiesel.

--You can keep Oprah ,  Michael Moore  and  Rosie O'Donnell . You are, however,  responsible for finding a bio-diesel vehicle big enough to move all three of them.

--We'll keep the Bibles and give you NBC and  Hollywood  .

--You can make nice with  Iran  and Palestine and we'll retain the right to invade and hammer places that threaten us.

--You can have the peaceniks and war protesters. When our allies or our way of life are under assault, we'll help provide them security.

--You are welcome to Islam, Scientology, Humanism, political correctness and Shirley McClain . You can also have the U.N. but we will no longer be paying the bill.

--We'll keep the SUV's, pickup trucks and oversized luxury cars. You can take every Subaru station wagon you can find.

--You can give everyone healthcare if you can find any practicing doctors.

--We'll continue to believe healthcare is a luxury and not a right.

--We'll keep "The Battle Hymn of the Republic" and "The National Anthem."

--We'll practice trickle down economics and you can continue to give trickle up poverty your best shot.

--Since it often so offends you, we'll keep our history, our name and our flag.

Would you agree to this?   If so, please pass it along to other like-minded liberal and conservative patriots and if you do not agree, just hit delete. In the spirit of friendly parting, I'll bet you answer which one of us will need whose help in 15 years.

Law Student and an American

P.S.S.  And you won't have to press 1 for English when you call our country.

Forward This Every Time You Get It !  Let's Keep This Going, Maybe Some Of It Will Start Sinking In.

This is why I titled the original post "Three Cheers for Crazy Uncle Liberty".

Because Crazy Uncle Liberty was finally forcing the Party of Lincoln to run the bilious crazy they all secretly worship all the way to the top of flagpole, and then demanding that Willard Romney step into the public square and salute it.

Which is why, if you really want to know what the GOP was like during the Before Time and what led to the rise of Trump, don't ask a Never Trumper.

Because Never Trumpers knew.  They knew and they let it happen.

If you really want to know what the GOP was like during the Before Time and what led to the rise of Trump,  ask the people who have been right about the Right all along and spoke about it openly back when warning that the GOP was rocketing down this road was career suicide.

If you really want to know, ask a Liberal who was there.

I Am The Liberal Media.

Email ThisBlogThis!Share to TwitterShare to FacebookShare to Pinterest
Labels: Snarkeology

Somehow this reminds me of a communication I had with my Senator (Sasse) over his local paper interview over why he voted to acquit Trump for extorting Ukraine.

Senator said, " first let me say he (Trump) did it.

The reason I voted to acquit him, (Trump) was because his lawyer ( Rudy) told him it was okay for him to do it, )extort)."

So I asked, I I was first hand witness to your daughter being kidnapped by a crazed rapist/serial murderer and could provide police with car, license late and all to catch this person who kidnapped the girl. Why would I step forward like many did to testify to you of the crime and risk it all and expose myself to public scrutiny. After all, this suspect could have one lawyer out of hundreds that gave him legal advice telling him it was okay for him to do it.
But hey, my senator did not care to discuss it because I was too radically partisan. Especially in my conjecture of law when witnesses testify and prove the guilt even if the lawyers advice was bad the culprit chose to accept the advice as poor as it was.

So you se from his position, I was the radical wanting free stuff . Like an honest justice system.

Which Crazy Uncle Liberty and Republicans who find themselves caught for crimes they committed and do not care for consequences for themselves.

I remember back to the Voodoo economics days.

someone asked me to define a progressive...i could only come up with a democrat unwilling to compromise democratic principles...