We Are All "Nuke the Baby Seals for Jesus" Now 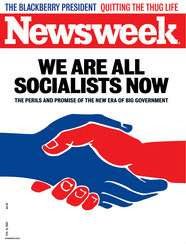 Sorry, but the name of this organization stinks. Don't people on the left ever do market research on anything? This will be as popular as defund the police. https://t.co/tkWPVKhymB

The Alert Reader will notice how this common critique of the Left jumps from the specific ("the name of this organization"), to the general ("Don't people on the left") to the OMG Defund the Police!! stage in just three sentences.  All it lacks to make is the perfect, bullshit attack on Democratic "messaging" is the "Joe Biden must do a Sister Soulja speech denouncing..." denouement.

Democrats have never understood that everyone absolutely loves socialism until you call it socialism.

It's true that, unlike the Right who all goose-step in more or less the same direction, groups on the Left are a large and fractious coalition.  We don't have Group Naming Steering Committee so we can't exercise the kind of tight messaging control the Right has used to brand such family friendly groups as, say, the Proud Boys,  the American Freedom Party, the Imperial Klans of America, the League of the South, the Patriot Front, Fox News, the United Constitutional Patriots,  the Liberty Counsel, the Fundamentalist Church of Jesus Christ of Latter-Day Saints, the Family Research Council, the Westboro Baptist Church, the Three Percenters, the Stormfront, the Council of Conservative Citizens, the White Lives Matter, the Oath Keepers, the National Liberty Alliance,  the America First Policy Institute, the Tucson Trump MAGA, MAGA Meetup Oro Valley, Trump Nation Tucson, WE ARE CHANGE LAS VEGAS, the St. Louis Trump Make America Great Again Meetup Group, the St. Louis Townhall Meetup Group, MAGA Meetups NEFL, MAGA Meetup Catalina, RVA Pro-Trump Caravan Meetup, DFW Conservative Business Owners, the Trenton Donald Trump Meetup Group, the hundreds of Tea Party groups in all 50 states that are still actively spreading election rigging lies, COVID lies and pretty much anything that Tucker Carlson poops into their skulls, and so  forth.

So how exactly did it come to be that all of these grumpy critics of Democratic messaging freak out at the drop of a hat and starts yawping about "OMG!  Defund the Police!!!" when any Leftie thing that makes them feel icky -- no matter how obscure or objectively irrelevant -- pops onto their radar,  but you almost never see them wringing their hands in despair that Republican messaging sucks every time one of their goon squads shows up armed and crazy?
Why aren't these same critics shouting themselves hoarse that Mitch McConnell and Ron DeSantis and Kevin McCarthy and Donald Trump must immediately step up and denounce openly fascist madness like this which is happening all the time and in plain sight?

The January 6 testimony to date has focused on Trump and the ways he has encouraged and instrumentalized militia members. But support for vigilante violence has spread to other parts of the Republican Party.

In 2017, the Portland branch of the Republican Party voted to allow militia groups, including members of the Oath Keepers and Three Percenters, to act as security at their public events; a Colorado county GOP has also hired militia groups for security. In Michigan’s Grand Traverse County, local officials at a zoom-based public meeting were asked to denounce the Proud Boys after the insurrection – instead, the county commission’s vice chair stepped off-screen and returned with his rifle.

In Texas, Allen West, then-Chair of the Republican Party, offered an oath to “swear in” militia members at a Stop the Steal rally in November 2020, posed with armed militia members just days after the January 6 riot, and appeared alongside other Republican state politicians at a rally with the leader of the Oath Keepers militia in March after the latter was under investigation for his involvement in the January 6 attack.

This winter, a militia-backed recall election ousted the Shasta County, California Board of Supervisors; the new leaders owe their positions to militia support. In Arizona, Mark Finchem, a sitting member of the House, trumpets his membership in the Oath Keeper militia. The chairman of Wyoming’s GOP – engaged in a fierce battle against Liz Cheney, the January 6 Select Committee Vice Chair – is a member of the Oath Keepers...

Well, as a matter of fact we answered this question about a month ago.  When Joe "Joey Muskets" Walsh lost his mind because the terrible effect a comment by Secretary of Energy Jennifer Granholm had on one of Joe's imaginary friends:

Walsh: And what are the Democrats talking about?  Green energy  Green energy.  Solar.  Renewable energy. Wind.  Right now?  Right now?  When the average American is seeing a fifth of their paycheck going to fill up the tank every week?

Have they never heard of Altomont Speedway?

>>> In fact, if were an unscrupulous sort and wanted to make much more coin than this little blog brings in, I'm pretty sure all I would have to do is toddle on out to the far exurbs of Left-side politics and start an outfit called The Jimmy Dore Show Chapo Trap House "Socialists for Nuking the Baby Seals for Jesus".

Then I could sit back, put my feet up. and let the Conservative propaganda machine and the "OMFG! This is just like Defund The Police!!" hysterics do all my marketing for me.

The snark drips from this.

As though the MSM tone police wouldn't lose their Dogdamned fucking minds at the merest whisper of a controversially-named liberal organization. Stephens and Brooks would have tut-tuttery op-eds up within an hour of the official name announcement.

It appears the SVOOTUS fab 6 might have overturned the Hyde Amendment.

Hyde Amendment basically;
In U.S. politics, the Hyde Amendment is a legislative provision barring the use of federal funds to pay for abortion, except to save the life of the woman, or if the pregnancy arises from incest or rape.

Fact is this amendment was in place because of Roe and now it is overturned and a state evangelical issue of theocracy. It no longer holds any weight and only complicates their overturning Roe.
The Hyde's Amendment speaks to the law provides for Rape and incest and threat to life of the mother. Federal law over state law in my book.
With the high court overturning in the case V Maine's ban on public funds to religious schools. Now tax dollars go directly onto the churches donation plate.
And of course the government is going to pick and choose which religion ' church gets tax dollars . Which over turns the first amendment that government shall not establish any religion.
It will be the state governments deciding who is a religion, which religion gets the tax dollars.

Does anyone really think a evangelical GOP state house is going to use tax dollars to fund a Muslim Madrassa?

I'm not making this up. It's in the Fort Worth Star-Telegram.

what questions are cool...how much, who, when, where, what but none of the preceding has much to do with why?

the reason why is cognitive dissonance between being a flaming asshole as is their inclination and being a good person, good citizen, good christian (or jew.. ;->). trump is the deity as a brightly flaming asshole that cheats in every way possible and gets away with it...

trump and fox together tag team away the problem...you are fine, no swell...and your impulses are not-antisocial but sensible and necessary..

the why is to operate with the little voice we call a conscience to be silenced.