Will Saletan's "I Am Centrism!" Pays Off Bigly

About a year ago I wrote a thing about Will Saletan in which I said that, to me, Will Saletan...

...is the op-ed columnist version of the Kitty Kuspidor.  I know he is  human person that I've been subliminally aware of, off and on, for some period of time.  I know he writes opinion pieces for Slate because Wikipedia tells me so.  And I know he occasional brings the fact that he works at Slate to a wider audience than the editors at Slate by writing something goofy or "controversial" that draw some attention from he outside world.
Such as this codswallop --

The case for a broad, fact-based alliance against fabrications.

-- which immediately set off alarms by violating one of my most reliably battle-tested rules: when someone tells you it's not about Left or Right, tuck your money in your sock and run the other way.

I also took the time to gently remind Mr. Saletan that...

We already have a broad, fact-based alliance against fabrications.  It's called the Democratic Party and (frequently to my chagrin) anybody can join!  So thanks but no thanks, we don't need a new clubhouse with people like you working the door.

After Mr. Saletan took his readers on a journey though his salad days --

Over the years, I’ve bounced around the political spectrum. I was liberal in Texas, more conservative in college, and now I’m somewhere in the middle.

-- I wrote that maybe, during all that bouncing, Mr. Saletan had bonked his head and slept through [checks notes] the entire Bush Administration and the primal-scream racist freakout over the Kenyan Usurper because:

What Trump has brought to the United States is ruthless, relentless, denialist propaganda at a scale we used to see only in dictatorships.

And when Mr. Saletan continued chumming the waters with big, gloppy dollops of Both Sides Do It  --

Progressives and conservatives have always quarreled about what’s true. But to make those debates productive, and to correct our country’s mistakes—failed projects, naïve policies, bad wars—we need a common standard for judging truth. That standard can’t be the Bible or identity politics.

-- I wondered loudly what great sea creature he was hoping to attract, especially when his marching orders for us mouthy Libtards was...

...supporting Sen. Mitt Romney, Rep. Liz Cheney, and other Republicans when they speak the truth. It means seriously engaging with fact-based journalism at the Dispatch, the Bulwark, National Review, and other publications in the center and on the right. It means distinguishing the sins of Ronald Reagan and George W. Bush from the pathologies of Trump and Newt Gingrich.

The Bulwark?  Really?  Where'd that come from?
And then it all became clear to me when Mr. Saletan was suddenly a featured guest on The Bulwark podcast, 01/27//2021:

Episode 522:  "Will Saletan: We Need a Coalition for Truth"

So I reminded Mr. Saletan one more time that maybe, just maybe, what the tiny fraction of Republicans who are not completely fucked-in-the-head needed to do was join the broad, fact-based alliance against fabrications which already exists called the Democratic Party.  Then I congratulated Mr. Saletan for winning a guest appearance on The Bulwark by flattering The Bulwark and writing a very Bulwark column.

Because that's how it's done, kids!

But little did I realize that this was not a one-and-done.   That wedging himself onto the already-overcrowded Centrist/Both Siderist pundit lifeboat would pay off for Mr. Saletan long-term. 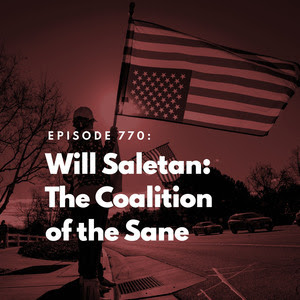 Sykes: Uh you... you... you are the national correspondent for Slate, but as they say on the social media, you have some personal news.

Saletan:  Okay so I wrote an article in Slate almost exactly a year ago about how that we need a coalition that crosses party lines, that crosses ideological lines...

It doesn't seem like they are trying to save democracy so much as not get bitten on the ass for what they've already done to it.

How do I make this point about both siderism?

The republicans who took the money of weapons' manufacturers / the NTA to make it more easy to put a weapons in the hands of anyone anywhere. (Except on Supreme Court building grounds) or ( in their exclusive gated communities).

Weapons' and ammo sales and profits go up and donations to republicans fill their political coffers.

When guns end up with unstable folks committing mass shootings at schools murdering children. The pro gun and death religious who made it possible tell us "Thoughts and prayers" "there is nothing they can do".

They made it happen and tell us we cannot stop it.

Their abortion banning in the name of pro-life religious beliegs becomes disconneted from their stance with guns. A state banning abortion like Texas only restricts those without the financial means to leave the sate and get it.

As Justice Barret made a personal statement when she was supposed to be questioning MIss. State lawyers. She stated out of the blue, "I see no reason of burden for a woman to carry any pregnancy to term and birth since many states now have child drop off places for unwanted babies".

Ignoring not everyone can afford health care and promoting government taking custody and rearing children by the state. It won't matter if a mass shooting kills a bunch of these kids because they were already born into the world.
They are someone else's problem now.

After these wingers directed their party to radicalism by trigger words and hate to the point of violence for whatever their issue of the moment is.
They now work to bring in disenfranchised republicans into a realm of , Moderate in name only" to return them into the process to retry to radicalize them into the main GOP stream.

There is no both sides to doing nothing about mass shootings . Not just at school or Las Vegas outdoor concerts Now if your Pizza takes too long or is not prepared as you want it. It is too much to return it and demand it be done correct. You pull out your gun and shoot the fast food employee at the counter.
There is no two sides to this unless their is a victim of crime and the criminal who committed the crime.

It is no difference than Mike Huckabee selling his preserved buckets of food insurance that will be delivered once the zombie apocalypses begins or the Civil war starts. Because somehow the mail will still be delivered in such catastrophes.
I notice both sides argument is used when defending a republican rotten immoral accomplishment.
We do not hear republicans saying hey Bill Clinton and his affair out of wedlock between two consenting adults is something both sides do. We see then in full impeachment moral outrage mode. Even if they have to rid themselves of Sp[eaker Newt and replace him with Pedophile Denny Hastert.

" ...supporting Sen. Mitt Romney, Rep. Liz Cheney, and other Republicans when they speak the truth. It means seriously engaging with fact-based journalism at the Dispatch, the Bulwark, National Review, and other publications in the center and on the right. It means distinguishing the sins of Ronald Reagan and George W. Bush from the pathologies of Trump and Newt Gingrich."

Mr. Saletan did not go on to say out loud...

"It means buying the records Charles Manson made when he wasn't busy sending his minions out to murder people! It means supporting Mr. Musollini for making the trains run on time, but chiding him for making deals with Mr. Hitler, whose views on the Jewish question are sometimes unfortunate"