Step One: Clearly understand who Republicans are and how they function

And page-by-page it followed the same tired You-Must-Be-Shitting-Me Bush nomination playbook. Specifically, a lavish and mindless defense mounted by the infinitely reprogrammable Golem of the Religious Right: that Reliable Fucktard Militia, trained to hold themselves ferociously blind to facts of any kind – no matter how staggering -- that might conflict with the pronouncements of Dear Leader. Always painting anyone standing in their Shining Path as Christ-hating traitors at 100,000 decibels.

The day that the GOP stops kicking gays in the teeth, recruiting klansmen, demonizing muslims, lionizing monsters who blame 9/11 of feminists and the ACLU and calling people like me traitor for opposing my government...that’s the day I will be happy to beat my pronouns into plowshares and talk peace and compromise.

But of course, they can’t let the crazies go. First and foremost -- as Barry Goldwater prophetically warned -- because the crazies now run their fucking party, from crotch to crown. The gargoyles have taken the cathedral, and Falwell and Dobson sits upon the Throne, while the Hagels and the Grahams are now the “fringe”.

And second, if they ever did kick the freaks out, they wouldn’t win another election. Ever. Anywhere. Seriously. As I’ve said before, without their Christopath Legions and assorted other reprogrammable golem shock troops, the GOP would be the Constitution Law Party, squatting impotently in the swamps of Mississippi, muttering angrily about Negroes.

And at heart, Quislings like Brooks would much rather have a police state with theocrats, deficits, endless war and tax cuts than a democracy with incrementally higher marginal tax rates and his Party out of power...

Step Two:  Think through how the reprogrammable GOP golem will react to future stimuli:

Step Three:  Watch in sadness as it all unfolds as predicted.
From the Georgia Reader on January 20, 2022:

Bookman: Crank hypocrisy alarm up as Kemp takes credit for Obamacare insurance access
...
In his State of the State address last week, Gov. Brian Kemp bragged that as recently as 2019, “Georgia had only four health insurance carriers offering plans in the individual market. Today, we have nearly tripled that number with eleven carriers offering plans for 2022.”
He went on to point out that “in 2019, only 26 percent of Georgia’s counties had more than one carrier offering insurance on the individual market. Now, in 2022, 98 percent of all counties have more than one carrier – which means expanded choice and lowered costs for hardworking Georgians.”
If your hypocrisy alarm is blaring, it ought to be. Without saying the “O word,” Kemp is basically embracing and taking credit for the success of Obamacare, the health insurance program that he and every other Republican predicted would destroy the American health care system, produce ruinously high insurance premiums resulting in the dreaded “death spiral,” and in the process turn us all into Communists. Here in Georgia, GOP officials tried hard to ensure that the program failed, with then-Insurance Commissioner Ralph Hudgens at one point pledging to do “everything in our power to be an obstructionist.”

Step Four:  As an additional bonus, if you do your prophesyin' correctly, after it all comes to pass you can almost always look forward to a raft of op-ed thinker pieces about how no one could have seen any of this coming from all the usual savvy pundits. 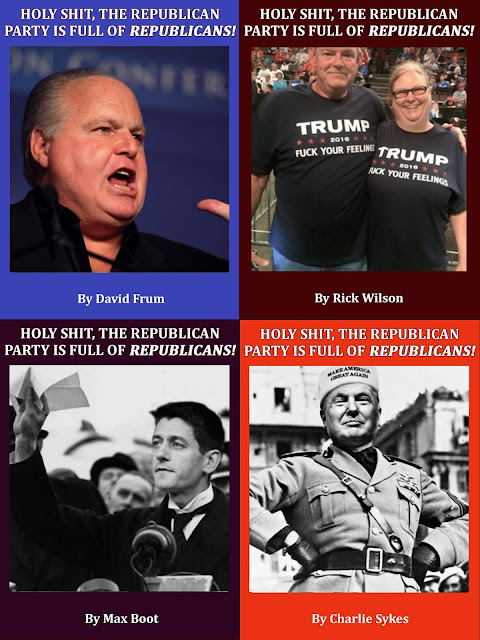 Not sure if I agree with the squatting in the swamps impotently statement.

The power of governance is the only power the people have to check the power of the ultrawealthy. So long as there is government, the wealthy will seek to check it's power. The pendulum tends to favor the wealthy because they have longer institutional memory.

Btw, the reprogrammable golem theme is perhaps more useful than accusations of hypocrisy. It certainly helps to have these analogs to describe the elephant, from one blind person to another.

Where Did The Idea Of Obamacare Come From? A Defense Of The Heritage Foundation
https://www.forbes.com/sites/johngoodman/2016/02/15/where-did-the-idea-of-obamacare-come-from-a-defense-of-the-heritage-foundation/

The Conservative Origins of Obamacare
https://krugman.blogs.nytimes.com/2011/07/27/conservative-origins-of-obamacare/

Interestingly, Obamacare policy appears to something that Republicans generally want to deny was their idea.

If you noticed the D.C. republicans have become upset with right wing insanities being removed\. Hell Marge Greene was penalized a republican congress woman.

Now we se all the republicans that control majorities in state governments in a and fascist dash to ban any liberal literature. Some specifically racist by targeting black authors.

Has anyone made the revenge connection.

The other day you wrote a bit on T. Friedman ie the Mustache of Understanding. I was reading some in the intertoobz and thought you'd gone to work for Aljazeera. It's uncanny how they mirrored your revulsion for the guy!

A snippet;
Tom Friedman and Israel will save US democracy and blow your mind
New York Times columnist Friedman says he has a solution to America’s democracy problem.

Tom Friedman and Israel will save US democracy and blow your mind
New York Times columnist Friedman says he has a solution to America’s democracy problem.
Belen Fernandez
Contributing editor at Jacobin Magazine
Back in 2009, heavily remunerated multi-Pulitzer-Prize-winning New York Times foreign affairs columnist Thomas Friedman – who has been employed by the US newspaper of record since 1981 – wrote with characteristic eloquence: “Many big bad things happen in the world without America, but not a lot of big good things.”

This was presumably news to the people of Iraq, Afghanistan, Vietnam, Hiroshima, Nagasaki, and the myriad other locations on the planet that have been on the receiving end of “big good things” from America.