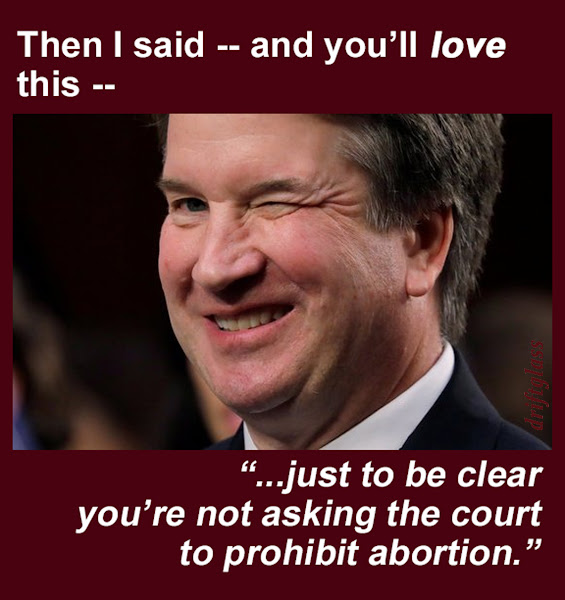 I know this is off topic but I just saw it and thought you'd like to know if you haven't already seen it. Seems there's some buyers remorse;

No one seems to like the Lincoln Project anymore- Politico

More broadly, Democrats who once saw the Lincoln Project as a helpful compliment to their efforts to defeat Trump now view the group as a distraction and a drain of broader campaign funds.

“When it first started, I was like, ‘This is so great. I love it,’” said Tim Lim, a veteran Democratic digital strategist. Now, Lim added, “Most of the left is not sure why they're still around. That’s the prognosis in story after story, and it’s been brutal for them.”

There is no doubt in my mind that if any SCIOTUS Justice family female member wanted an abortion after they were to ban abortion altogether.

They would mean, their ruling is for the peon's not for the real true deserving Americans.

They know damn well, there is not one wealthy person that any restriction (s) they might rule on Abortion and women's rights will hinder .
Like Guns everywhere rights but not in our Supreme Court room or building.

The logic of banning Abortion when present law makes it available and not a demand order.
If one does not believe in it (religiously or otherwise) Do not get one.
For me, it comes down to extremist religious views being forced on others.
Maybe Justice Amy Federalist 'religion first Barrett will add the banning of Gynecologists'. Because if you truly believe in God, he will take care of those inside parts of demon stopping the sin of females exposing their Woo-hoops to strangers that call themselves "doctors".

"He smiled a tight little smile which Zaphod immediately wanted to hit with a brick."
-- Douglas Adams, The Restaurant at the End of the Universe

the only face that calls out for a fist more than Brett "I like beer" Kavanaugh is Tucker "The Future Belongs to Me, if I can become a real boy" Carlson, but it is a close race, with Matt "Good Morning Little Schoolgirl" Gaetz a very close third.

It would seem that justice Likesbeer lied at his confirmation hearing...

You have to know Kavanaugh is serious when he confers with Squee over some beers on the striking down of Roe v Wade.

Justice Coney Island reveals her long held Federalist religious beliefs that were downloaded into her maids tale brain. Does want to have beers with Squee and Kavanaugh because she knows damn well what happened to the last woman who did .
Alito says this will be great for his legacy of law and punishment of those peons that can
t afford to purchase and stuff the SCOTUS with their judges. As Roberts is concentrated on counting Balls and never seeing a strike.
Which leave Clarence who is stuck in his outrage of his confirmation high tech lynching. Engulfed for his life, living in spite and spitting at anyone he perceives as one of them. matched in perfect harmony with his white wife that his white supremacist party does not approve.

In other words. They do not look as if they are adhering to law. Rather, most wrapped up in their damaged personal lives and the ethics they sold piece by piece of their souls to become a Supreme court Justice for life.

Every single one of those justices know. Not one person of affluence will actually be bound to what they say they wish by over turning Roe. Only the peon's with bear any grief and be held to any legal punishment.

But they can meet in their groups and organizations and continue to sleek where in their Bible does it say Abortions are against the law.
They can all give each other Christian medals while another School shooting takes the lives of more school kids.

Forgive me Lord for I have thought. Thought critically and with my own brain.