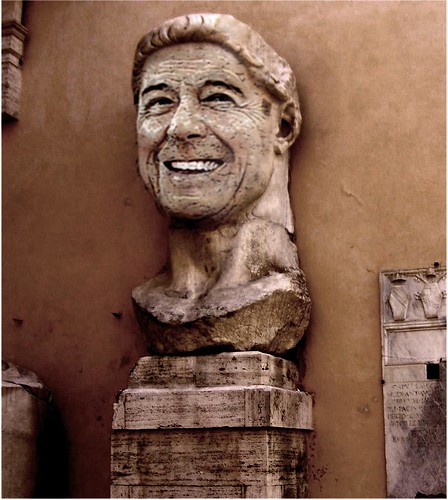 To mark the occasion of David Fucking Brooks' column in The Atlantic and  Brooks and Squint Scarborough strapping a Ronald Reagan mask on an old, patched-together True Conservatism fuck doll, inflating with their wistful farty remembrances of a Glorious Conservatism that never was, and just going to town on it on live teevee, I should probably get off my lazy Liberal ass and crank out special edition of  "True Conserative Magazine- A Monthly Journal of Self-Regard" 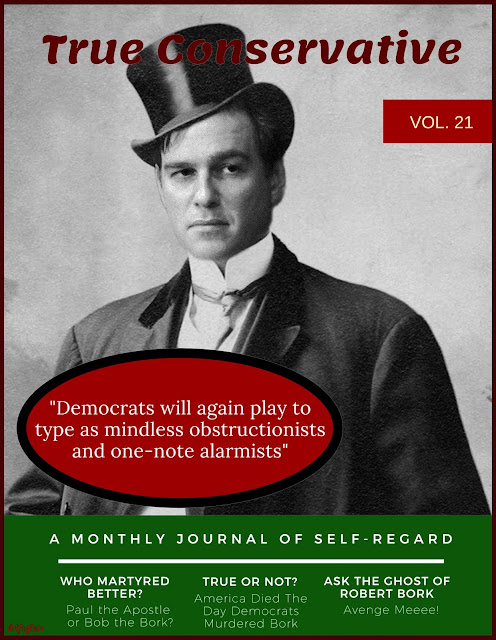 But I probably won't.  Brooks' History of Conservatism can be rendered down to --

Instead I'm re-posting one of the first David Brooks columns I ever wrote.   It's from April of 2005.  Before Biden.  Before Trump.  Before Obama.  Back when even whispering such things got you tagged as a dirty, hippie pariah forever.

I leave it to you the reader to judge of how well my earliest written critiques of Brook from +16 years ago have held up.

...I pulled this up out of a reply to specific comments, because the question of "Why bother with Brooks at all?" and "Who reads the NYT anymore anyway?" comes up here and elsewhere, and I think it deserves an answer.It seem very clear to me that BoBo is many laughably obtuse things, but BoBo Don't Surf. He isn't simply misguided and there is little chance that he's ever going to see the light and change his mind: he reasons backwards from his ideology into his limp diatribes, instead of forward from the facts to a reasonable conclusion.Instead (and in answer to those questions) I believe Brooks is a serious, committed Wingnut middleman -- sort of the Fundamentalist's pet PBS Mennonite -- which IMHO is much more dangerous than a fully outed [Tom] DeLay.Brooks' job is to sell the poison to the Center: to reassure the Moderates and “Reagan Democrats” and to coax the Undecideds into the Windowless Fundy Panel Truck by dandying their evil up in perfumed NYT-speak, and since the battle for the future of the country takes places in the middle, these wingnuts-in-sheeps-clothing are the ones that deserve extra-special beatings.The good news is, BoBo obviously doesn't know he's an idjit. Instead, he thinks he's tricksey, which is why he keeps obligingly waddling into the thresher blades.

UPDATE:  This from Raw Story was too delicious to leave out.   You're welcome, future generations!

'I could care less!' Marjorie Taylor Greene explodes with anger after she's blamed for death of conservatism

"They are singling you out as the problem," Bannon told Greene during an interview on Real America's Voice, referring to a column by David Brooks that declared the death of conservatism.

Well Gee-whiz. I could only wonder what the Brooks defining Alphabet soup article on Conservative's deeply held pro life convictions (as Abortion), but also with the latest SCOTUS suit in front of the pack ratted Supreme court of conservatives.

Talking about trying to get a SCOTUS ruling that prohibits Death Row inmates from having their lawyers present new evidence of incense.

Now if that is not Conservative pro life that Brooks can write about. Not sure what is.

But Brooks to will neglect and ignore the Justice Barret doctrine of government in charge of all those babies that will be coming their way after they rule on striking Roee.
Then watch for the insane crying about government paying to raise children no one wants to adopt.

And they can grow up to be on death row with no right to appeal their innocense.

Greene: *posing in a Christmas photo with a gun she can't disassemble* YOU'RE RUINING CONSERVATISM!! YOU'RE GIVING AWAY THE GAME!!

Brooks: *posing in a Christmas photo with a book he can't disassemble* YOU'RE RUINING CONSERVATISM!! YOU'RE GIVING AWAY THE GAME!!

Brooks can write his column on how great conservatism is in the largest letter type on his computer.

He can shout the republican lies as loud as his voice, a bullhorn or mic and amp will reproduce it at the loudest volume.

Brooks can use all the flowery scented words to imagine the republican/ conservatism.

They are still lies.

Their use of pronouns is horrendous.

" "They are singling you out as the problem," Bannon told Greene during an interview on Real America's Voice, "


" referring to a column by David Brooks that declared the death of conservatism."

- What other ending result can there be for a death cult?

" "He doesn't get to define Trumpism," Greene said. "I represent the American people. These are the same people they look down on. "

- Last I checked, I am one of those American people. My instinct tells me she doesn't see me as one.
When Banon is not looking down on me. He is looking out from his comfort on that Chinese Billionaires yacht.

" These are the same people that they forget about."

- They don't forget about me. They use me as their American people enemy. There is no consideration of me because it is all about poor them.

_ "They" cannot relate to me. They are so stuck up, angry, hateful and greedy. So wrapped up in themselves it is all about them and they disregard who they are supposed to represent and absolutely condemn people they disagree with and because they are so immoral and Un Educated they can't relate relate which frustrates them to hate those who they identify as less than American. Which allows their brain to justify not representing people they disagree with but wanted to be elected to represent everyone.

@ACNewman
@ACNewman
Love is like this, David. You fall in love w/ a mirage, an idea of the person, and eventually the truth of what they are, what you are, is revealed. And when that happens, you work it out, you don’t throw them away + get a new one. I’m sure you + Conservatism will work this out.
Quote Tweet
David Brooks
@nytdavidbrooks
· Dec 8
I fell in love with conservatism as a young man. What the hell happened to it? https://theatlantic.com/magazine/archi

"Down the centuries, conservatives have always stood against the arrogance of those who believe they have the ability to plan history..."

Brooks willfully ignores that the central tenet of conservatism is that the 'deserving' should rule over the 'undeserving.' Going all the way back to Burke himself, conservatives believed that monarchs, then aristocrats, now capitalists should plan and rule our lives. That is their 'plan' of history and how society should be constructed.

It's just as artificial as any other social construct, but Brooks and his ilk claim that this is the natural order of things. They must do this because the only justification they have is 'tradition.' Tradition is the weakest of all reasons, because it means that because we did something before (or falsely remember doing it), we should do it again.

Brooks clings to his hagiography of 'true' conservatism so that he never has to reckon with the fact that he has enabled atrocities in its name.

MTG is not wrong - the elite GOP look down on the Proles, just like they look down on all of us. Of course, the worst offenders are Democrats, who try to help the poor and underrepresented Proles and are vilified for it because of...Why again?

Oh yeah, because of propaganda and because the poor and underrepresented also includes POC and and other minorities as well as women.

Nothing worse than being oppressed by people and being offered help by people who would also help POC and Women. Whatever happened to the inalienable right to have help be offered ONLY to white cis-het Christian men? I tell ya, it wasn't like this in the phoney-baloney, total-made-up time of my grandfather...