Matthew Dowd and The Silence Between The Notes 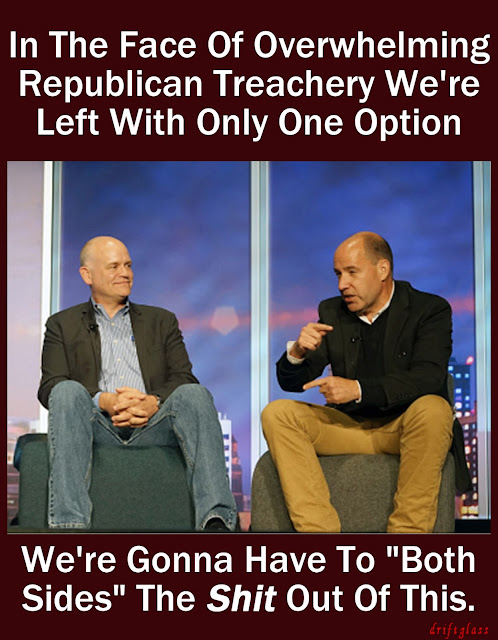 Thanks to Alert Reader Steve, I was able to read Anand Giridharadas' entire interview with Matthew Dowd. And while do I appreciate this bit here --

But the heart of the conversation is summarized by this question.

I remain bothered by the fact that those who were wrongest the longest, when they deign to defect, cut to the front of the line of leadership against the tyranny they helped enable.https://t.co/LVsOmAIGR1 pic.twitter.com/ixjKDTb1gj

-- because it shows Mr. Giridharadas returning a subject that is clearly important to him (from February, 2021) --

See, for example, how many highly culpable figures of the George W. Bush presidency have now become well-published writers on the topic of saving democracy — saving it from the totally predictable consequences of everything they once worked toward.

-- and for which I have praised Mr. Giridharadas in the past, it is also clearly a topic for which candidate Dowd had a politician's pat answer ready to go.

DOWD: The struggle I have is this. I don’t think about this like jumping to the front of the line. This is not something where I was up at night, rubbing my hands together like, “Oh, I can’t wait to run for public office.” It’s actually a huge sacrifice for me, because my life is pretty good compared to going into the foray and getting beaten up by both sides. There are progressives who are mad that I’m doing this. And so are Fox News and Breitbart — that whole thing is also unrelenting.

What deeply disappointed and, frankly, surprised me were the obvious questions that Mr. Giridharadas did not ask.

For example, not a single question about what Mr. Dowd was doing during the 13 years between quitting the world of getting Republican douchbags elected and now.

13 years which Mr. Dowd spent as ABC News' chief political analyst becoming one of the most prolific and aggressive practitioners of toxic "Both Siderism" in the pundit business, especially during the 2016 campaign season and after.

It was also pretty amazing that Mr. Giridharadas did not ask a single question about Mr. Dowd nuking his entire Twitter archive, which effectively obliterated 97% of the evidence of his daily crimes against journalism and democracy when he was acting in his capacity as ABC News' chief political analyst .  Nor did he ask Mr. Dowd a single question about automatically blocking anyone on social media who even lightly brushes up against his deeply inconvenient past.

So either Mr. Giridharadas completely failed to so his homework in advance of this interview, which I do not believe, or the ground rules were negotiated in advance of them sitting down together.

Your years bashing Democrats and Republicans as equally bad?

Your indignant story about the arrogance of Barack Obama having a "farewell" speech which turned out for be factually wrong on every level? 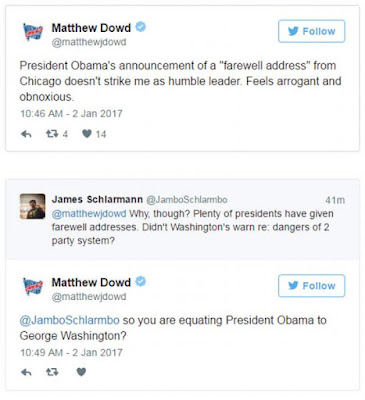 Your relentless insistence that people needed to vote third party because overthrowing the the "K'rupt Duopoly" was vastly more important than whether Corrupt Hillary or Corrupt Trump won?

The way you used your position as  ABC News' chief political analyst to punch down at anyone who disagreed with you on social media?

Once again, observing what media persons choose not to talk about when the need for it is staring right at them -- the silence between the notes -- often tells me more about the state of the media than the notes themselves.

"I don’t think about this like jumping to the front of the line."

I'm sure you don't. Let's not bicker and argue over who killed who ...