It's Nice, Having Big Friends With Big Pens

What jumped out at me about Smith's coverage is how casually he yadda yaddas everything that Mr. Dowd has been up to between 2007 and today.

Smith jumps damn near the last decade and a half of Mr. Dowd's life and career, from here --

Dowd’s disenchantment with the party is not new: He split with Bush, loudly and publicly, in 2007 over the handling of the Iraq war.

There’s a lot of distance from W to MAGA...

-- in the space of one sentence:

He spent most of the next decade as an Independent, consultant, and TV commentator, before becoming a Democrat...

Before moving on to ask:

There’s a lot of distance from W to MAGA, but does Dowd deserve any of the blame for creating the mess we’re in now, the one he’s running to help fix?

Which is, of course, another of Mr. Dowd's many bullshitteries and almost certainly one of the reasons he wiped out his Twitter archive.  Because his Twitter history was full of years and years of crackpot alarmist Liberals who foresaw exactly where things were going, and who warned Beltway media clods like Dowd over and over again that their relentless, pathological Both Siderism in the face of the onrushing tidal wave of racism and derangement from the GOP was not only lazy, incompetent journalism and patently false, but toxic and reckless in the extreme given the threat bearing down on us from the Right.

And let me tell you, Matthew Dowd really, really hated it when disreputable non-bluecheck Liberal bloggers pressed him to admit that he had gotten big, important things wrong.

do you ever get tired of always seeing the world in a biased way?
— Matthew Dowd (@matthewjdowd) December 9, 2016

why don't you accept people for where they are in the present?
— Matthew Dowd (@matthewjdowd) August 21, 2016

let the clinton stuff go. Trump is president elect. And let's concentrate on that, and future leaders. Not the past.
— Matthew Dowd (@matthewjdowd) December 23, 2016

If you read Driftglass then you don't care much for the truth.
— Matthew Dowd (@matthewjdowd) June 23, 2017 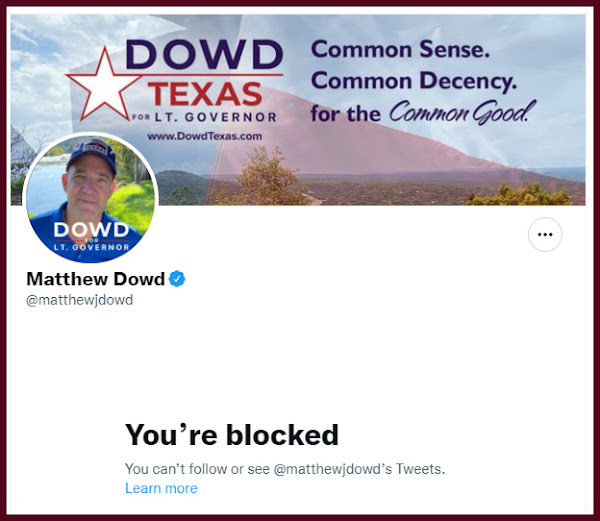 Which was followed by Dowd getting hilariously self-righteous in his demands that people-who-are-not-Matthew-Dowd need to step up hurryupquick and apologize for getting shit so fucking wrong:

For all those commentators/pundits/media who said Trump had a very effective convention at the time, you might want to publicly say you were wrong. He didn’t change the polls at all, and his job approval is still exceedingly negative. Waiting.....
— Matthew Dowd (@matthewjdowd) September 3, 2020


Which was followed by Dowd erasing his entire Twitter archive so that evidence of his fraud, lies and hypocrisy is hard to come by if you're not already on that beat.
Which was followed by Dowd's friends and well-wishers in the media abetting his deception by agreeing to not do the basic work of journalism -- not asking a public figure with a public record running for public office some very basic questions about what's he's been up to over the past 13 years.
Which is what Chris Smith, managing editor of Vanity Fair magazine, has done.

If you keep asking these embarrassing questions.
The embarrassed are going to take it badly.
Just saying.