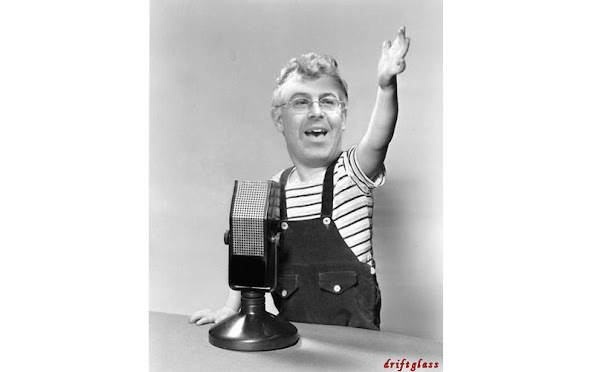 The world is full of things, and our brains are things that try to make sense of all the other things in what Assyrian philosopher Serta M'attries has called "the thingoverse".  But our brains are tiny and live in gated suburbs and even though our feet may carry our brains to exotic sandwich shops, other brains with smaller capacities can react to those sandwich shops with fear. What Minoan essaying Percale Sheez refers to as muffalettaphobia.  So we invent places to put all the things to help us categorize the things depending on whether they make our brains secrete scare juice or horny juice or both. Categories like shoat, Mercator, slinky, furries, zinc, Seka, palmistry or Golgi apparatus.

Of course our brains, being lazy stockboys who work for minimum wage and amuse themselves by getting stoned and arranging display mannequins in sexually suggesting positions after the store closes, often just stock our brainshelves any old way, so that we end up thinking that, say, "talent" and "a job for life at The New York Times" are somehow related when they are clearly not.  Even so, we need our brainshelves because as our old friend Sear Roebuck said many times, "If this shit isn't stacked and inventoried by sun-up you're all fucking fired!"

It becomes a serious problem when your braincustomer tries to buy a Bowers & Wilkins 702 Signature Floorstanding Speaker for $4.99 because it was put on same brainshelf as the Presto Paper Towels and priced along with them. And then your braincustomer gets into a big argument with your braincashier, and your braincustomer goes 100% brainKaren and demands to see the brainmanager while your brainstockboy looks on laughing its brainass off because its still stoned and fuck this job anyway, the only reason it stays is hilarious shit like this and if they fire it, well brainWendys is always hiring.

This is called quadrantism.  It is the belief that fights between braincustomers  and braincashiers can be settled short term with coupons and blaming the brainstockboy and long term by dragging everyone's brainass in once again to re-inventory everything.  Which never really works because it always gets late, and the eventually brainmanager goes home to get drunk and watch WWII documentaries and the brainstockboys break out the weed and some wag who claims he's read "some Nietzsche" says something like "You know, at the subatomic level is there really any difference between a Bowers & Wilkins 702 Signature Floorstanding Speaker and some shitty paper towels?"

And someone starts laughing.

And they all start laughing.

And we're right back where we started from brainshelf-wise.

America is awash in quadrantism. I know a guy who knows a guy whose dad was a medic in San Antonio during WWII and he says that back then Americans were some brainshelf sorting motherfuckers.  Everything was always lined up neat and orderly because we had to beat the Nazis because their brainshelves were so fucked up.  Everything was so well-managed here that America even had completely different brainstores with completely different brainproducts for the coloreds, and everyone was happy with the situation and everyone got along great.  But now?  Forget about it.

Sure, some it was bad, but what's even worse is when groups that may have been what people would consider to be "oppressed" start milling around outside one's gated community, disturbing you with their shouting and whatnot while you're trying to use your mighty brain thing to write an 800 word exercise in namedropping about brain things.  University of American Samoa fractometiculist Cajoline Snuggle-Bear observed that there are two sets of brainshelving movements in America, and each one is exactly the opposite of the other, and both are equally wrong.

C'mon people.  After 18 years of me writing the same fucking column over and over and over again, we all know how this goes.  Just fill in whatever.  On the Right there are, say, Presto Paper Towelians.  And on the Left there are Bowers & Wilkins 702 Signature Floorstanding Speakerists.  None of it matters and no one will remember it a week from now anyway so go nuts.

Last week I was researching some porn sites and my wife was suddenly in the doorway so I Alt+Tabbed like a boss over to another screen -- maybe Twitter, or Twitchy?  It Twitchy a thing? -- anyway, there was something about “What’s Up With White Women?” and my wife asked what I was doing and I pointed at the screen and said "Research.  Can you believe this shit?"  And she looks at me like Carmela Soprano looks at Tony after she damn well knows he's been with his goomar after he swore he would never do it again and she says, "You better be damn sure I see that 'research' in your column, Mr. Brain Thing."  and storms off.

Come to think of it, maybe it was a "Blazing Saddles" YouTube?

Anyway, how dare some internet rando pretend that all the white women in the world are the same!  See what I mean about quadrantism?  And what about this Trump stuff that keep happening?  And people who keep calling the media "corrupt" and saying the “corporate media establishment” sucks.  And politics?  Don't get me started on the name calling and all the stupid.  The art of persuasion is lost and the blood-dimmed tied of word-salads about how rotten the other brainshelves are drowns out the song of...something something. 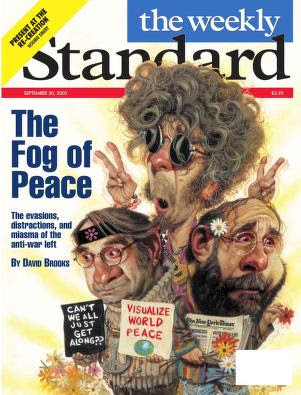 Worse, you find yourself in a society with rampant dehumanization, where people are always talking about the "talentless Conserative hacks" and the "Mopey Both Siderists" and the "Acela-corridor drivel buckets who have jobs-for-life at The New York Times".  Stuff that is completely detached from the complexities of reality and make certain Noble Men of Brainwords feel unseen as individuals.

Some people say the thing to do is to drop quadrantism entirely.  Other people say the opposite.  As usual, I am cowering under a braindesk in wherever I think the Sensible Center may be today.  That begins by acknowledging, as Ford Aperture has observed, that however horribly and consistently wrong Conservative pundits may be, at least giving them a job-for-life at The New York Times keeps them off of the streets and out of the gangs.

Of course, staying in whatever I decree the Sensible Center to be on any given day can be very hard.  For one thing, it would mean adding the Beltway Iron Rule of David Brooks to the United States Constitution. 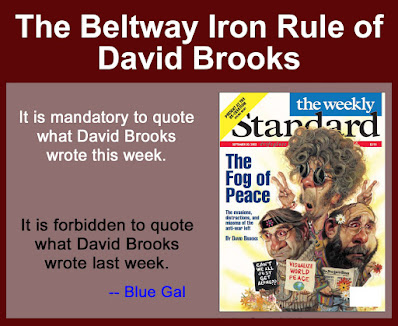 People are amazingly quick to shut up about the horrendous failings of Conservative pundits when they find both the law and all the savvy Beltway insiders are arrayed against them and they have no outlet for their stupid, hurtful opinions but Liberal blogs.

It also requires social courage.  As Tom Leher reminds us

And that, thank God and Copy/Paste, is 800 words, so Brooks out!

So I saw that DFB had a new, annoying looking column and thought to myself: "Wonder what Driftglass will write about this one?"

Now that DFB has written the masterful column opinion to end all columns of questions.

He made it fully clear for all times. Now all republicans can purchase their tickets for the mortal train ride to the Pearly Gates to face St. Peter.

With the confidence they have all the answers to the test.

I don't understand why DFB doesn't make the media circuit (circus) , on FOX with Tuckems, OAN, or NewsMax. Why has he never been invited on/ booked on Alex Jones?

Obviously, DFB is being silenced. So why are the liberals banning DFB from all these media sources?
Where are the GQP ? Why don't they plant bombs at FOX and other media places that are canceling DFB culture.
I mean why isn't public Schools teaching the opinion teachings of the DFB columns. Why do they deny Kindergartener's the freedom of leaning DFB's righteous words?