Stuart Stevens and the Caves of Lascaux 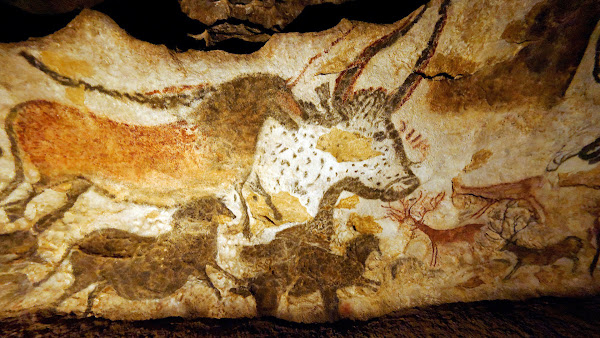 The paperback edition of Stuart Stevens' book, It Was All a Lie, dropped this week, which means he was making the rounds... 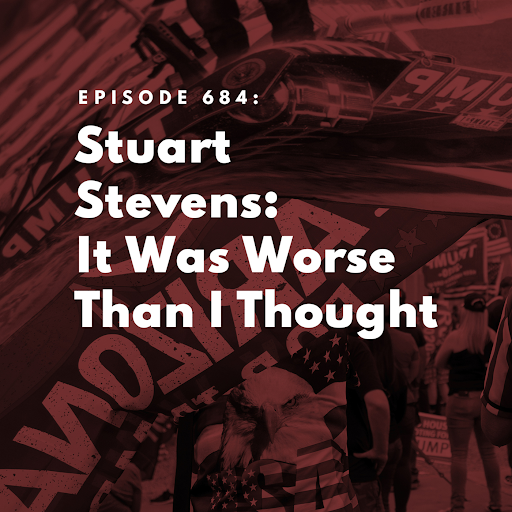 “The Republican Party is not about governing… it’s a party that exists to elect Republicans for the sake of power for power’s sake.” - LP Sr. Advisor @StuartPStevens to @ChrisLHayes pic.twitter.com/T8BpPn64zB

If you had sorta forgotten that Mr. Stevens was out there, that's not a surprise because the Trump/GOP origin story he tells is a story that makes the rest of the Beltway media -- especially the MSNBC Green Room Republicans who dominate the media -- visibly uncomfortable.

The story that MSNBC Green Room Republicans want to tell is that they were all good men (and women) and true.  Virtuous and wise and even if they played very, very dirty and lied and shit all over everything you and I value, the were guided solely by their mighty patriotic hearts.  And then...with no warning whatsoever...their entire Republican party suddenly became a racist shitpile of bigots and imbeciles with Donald John Trump seated atop it as its undisputed ruler.

A development which no one could have seen coming.

According to MSNBC Green Room Republicans this all happened like the MCU's Battle of Knowhere.  There were no warning signs.  No alarms. Instead, because of a madman's magical  powers, reality spontaneously transformed all around them, turning their familiar, intact world where they held the upper hand --

-- into a wasteland of burning rubble where they had lost everything.

This Very Big Lie about how the GOP came to be so fatally fucked-in-the-head is extremely useful to the Beltway media and MSNBC Green Room Republicans.

First, it largely absolves them of any responsibility for, well, everything.  Charlie Sykes can ruefully reminisce about how he regrets launching one, specific Republican asshole, Ron Johnson, to national prominence, but there is no sense of systemic culpability.   No recognition that by collectively working to create a voting base of reliably reprogrammable meatheads, all the influencer on the Right -- elected officials, ad-makers, radio talkers, teevee performers, think tankers, book publishers, magazine editors, etc. -- had a hand in paving the way for the rise of a monster like Trump.  And that by willfully ignoring what was obviously going on inside the GOP -- by smothering every escalating Republican atrocity on the road to Trump under a welter of whataboutisms and Both Siderisms -- the Beltway media drove the GOP's getaway car.

And that's why Mr. Stevens' GOP origin story is so very inconvenient.  Because although he pitches his tent in the Lincoln Project camp, what he has to say about how the GOP came to be what it is today blows all of his fellow Never Trumper's alibis and excuses to flinders.

From The Washingtonian a year ago:

"It Was All a Lie" is a glum confessional unlike anything published in the Trump era.

Yet by casting Trump this way—as a perversion of their ideals—the Never-Trumpers have cleaved the world neatly in half. In their tableau, there are Resisters, and there are Imposters: a war between adversarial tribes, which represent the only two kinds of Republicans left on earth.

In fact, there’s a third kind of Republican: His name is Stuart Stevens. Regarded as one of the party’s most talented political gurus—a body of work that includes steering Mitt Romney’s presidential campaign in 2012—Stevens may arguably be the Republican Party’s most prominent defector. Stevens despises Trump. He works for the Lincoln Project, too. But that is where Stevens parts company with the Never-Trump movement, and in exceptional ways.

While the Lincoln Project argues that Trump is perverting the Republican Party, Stevens doesn’t think Trump has perverted anything: Trump is the Republican Party, Stevens believes, and the Republican Party is Trump. He thinks that there is no reclaiming his former party—and thus no inspiring appeals for better angels left to bother with. Reflecting on a four-decade career in American politics, Stevens has become convinced that Trump was not an aberrant zigzag. He was fate. “I saw a lot of this stuff, but I just chose to believe that this kind of dark side was the recessive gene, not the dominant one,” he says. “I was wrong.”

I return to this topic again because from the caves of Lascaux to the Stop the Steal madness vomiting out of Hate Radio from coast to coast, the myths and legends and folk tales and origin stories that people tell themselves are terribly important.

Just consider how thoroughly the Obama administration screwed itself and us because they bought into the Centrist/Both Siderist/Murrica-is-a-Center-Right-country fairy tale that esteemed Beltway con men like George Will and Charlie Craphammer and David Brooks was peddling.  They were credulous enough to believe that McConnell's D.C. Republican goon squad were basically like Springfield, Illinois Republicans: people with whom you can play little poker, drink a little scotch, talk a little shit and then cut some deals.

But as history clearly showed and as Liberals warned the Obama administration over and over again, McConnell's D.C. Republican goon squad weren't like Springfield Republicans at all.  Instead they were racist, seditious vandals.  The same racist, seditious vandals that they are today -- a mob of power-drunk nihilists riding a base of rage-drunk imbeciles who are perfectly willing to burn the country down rather than let Democrats govern as Democrats.

And for my entire adult life, the animating principle for virtually every Conservative from Ann Coulter and Dead Rush Limbaugh to your favorite, cuddly, Never Trump former Republican has been the same.  Hippie punching.  Hating the Left.  Slandering Liberals as hapless, amoral dolts.

Which is why I will have no truck with this "The enemy of my enemy" claptrap.

Because the truth of our time is that history has both fully vindicated the Liberal critique of the Right and has made it blindingly obvious that Liberal polices are the only way to save this country as it teeters on the brink of collapse thanks to decades of escalating Republican incompetence, insanity and sedition.

And while I will happily take all the help I can get prying the GOP's claws from around our throat, I refuse to apologize for being right and, with whatever little influence I wield, I'll continue to refuse to let our new "allies" get away with pretending that the past we all lived through never happened, or that you and I don't exist, or that if we do exist, somehow we are to blame for the catastrophe they created.

Instead I plan to go right on doing what I have been doing all along.  Which, it turns out, also happens to comport with Stuart Stevens' advice to all Democrats:

I do not understand this kind of inferiority complex that Democrats seem to have about their electoral ability.  I mean they've won the popular vote every time since 1988.  I mean I was in these races.  I was in the race where we won the popular vote in 2004. It was hard!  Hard!  ... So, I mean if I could say anything to Democrats I would say, man, walk with a little swagger.  There's more [of] you than than the other guys. And you're right and they're wrong.  And start acting like that it's your country too. Don't be out there saying the "Republicans are better at this".  Just get about the business of doing what you can do better than they can and do it with confidence and not this timidity.

Remembering is always the super power.

Is there a more ironic phenomenon than this newly-found purpose and meaning that people are finding by rising up and rebelling against the "mainstream", the "elites", the "system"? They used to be called, among other things, hippies. Now apparently they're conservatives.

Also, listened to your summation of the history of the GOP and its political reality, with reference to Stuart Stevens, and it's almost too astute and concise to bear. This racist, power-mongering, financial elite cultivating ignorance, fear, and grievance in its base...the shear and relentless animus of the entire operation, including its patsies like Stevens, can only be described, especially when you consider things like preventable COVID deaths, as a force for evil.

I have no criticism of what you’ve written except to say that I will always prefer the original “reprogrammable meatbags” to the current version.

First time here. I've been listening to the podcast for a while and very much enjoy it.

Mr. Glass; Since you've been noting the "successes" of the Lincoln Lads, I thought you'd be interested in their recent efforts in Texas. Here's a op-ed article on it from our local paper the Fort Worth Star-Telegram (by Bud Kennedy);

Lincoln Project slams Abbott as ‘Trumpist,’ but he’s on track for re-election

FORT WORTH Gov. Greg Abbott is starting his 30th year of a perpetually charmed political career.
Right now, everything points to Abbott sailing into a third term as governor.
So why is a wealthy PAC of former Republicans running a TV ad criticizing Abbott?
The Lincoln Project PAC was set to air an ad Saturday night blaming Abbott for Texas’ 60,000-plus COVID-19 deaths, saying that’s enough to fill “a cemetery that would stretch from Austin to San Antonio” with “enough lumber to build a wall 85 miles long.”
Rick Wilson, the Florida campaign strategist who co-leads the PAC, said through a spokesperson: “After letting Texans freeze in the dark, failing to lead on COVID, cheerleading a racially motivated voter suppression bill, and enraging millions of Texas women in both political parties, [Abbott’s] being held to account.”
The Lincoln Project cranked up in 2019 to oppose then-President Donald Trump. Now, it targets anyone for what co-founder Reed Galen described as extreme “Trumpist behavior.”
The 60-second TV ad during the Texas Longhorns-Rice Owls football game shows a counter with the numbers of COVID-19 cases and deaths in Texas, enough to require “over 3.6 million feet of casket lumber.”

The tagline: “If Governor Abbott wants to build a new wall” at weak points along the Mexico border, “tell him to stop building this one,” showing a long row of caskets lined up on end.
It’s not a convincing ad.
Galen commented through a spokesperson: “Greg Abbott is what happens when someone is consumed by their own ambition. ... He’s a coward: not afraid of what his dereliction of duty will do to Texans but scared of his primary opponents.”
Abbott campaign spokesman Mark Miner replied sharply to the newest ad.
““I’m not going to respond to a bunch of has-beens and out of work political hacks who sit in their basement all day doing videos nobody cares about and watching reruns of ‘Seinfeld,’ “ Miner told The Dallas Morning News.

Calling him “Trumpist” doesn’t hurt him in Texas.