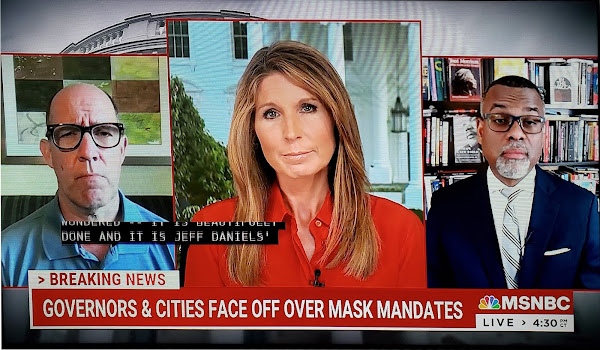 ...all that had happened over the past four years, I would have swallowed hard and believed you because the trajectory of the GOP over the past 40 years has been so blindingly clear that we on the Left have been warning about the coming of these evil days for a long, long time.

I would believe all of it because the trajectory of the media over the past several decades has been so painfully obvious.

And if you had dropped in on me in 2017 and proven to me that what was coming was true and inevitable, I probably would have continued running my little blog our here in the exurbs of respectability despite knowing that it would not only make absolutely no difference, but that we on the Left who had been right about the Right all along would actually spend the next four years being shoved even further to the margins by powerful forces in the media that are at war with the past.

Because I could do no other.

One of the items exposed by COVID and all the guidelines. From the White House down, the CDC out, you know the federal level.

To the state level and down to county and city level.

Democratic federal Government puts out guidelines. Republican's governors become loud and angry calling for the Feds to get off their lawns. How they know what is best for the people of their state, from a republican ideological point of view.
They say the federal level doesn't represent their republican governor level but the counties and cities in their states aren't on the same page as the Governors.

So Federal is big government and Governor says get out of here. The cities and counties set guide lines and what do the governors do?

They over ride county and city with republican's big state government.

Note; Where a democratic governor sets guide lines, his republican state senate majority over rides him.

So it is never about federal government or state rights. It is about where ever republicans hold majority power.

I would add to your list by including the Million, Billionaire's hiding in the dark funneling money to the to the cause of the South, whoops I mean Republican party, John Bitch, whoops I mean Birtch society (a lot of gall calling themselves a society).

But as always Follow the Fucking Money and you start to find the root. And how to stop our collective shock and awe of the very rich. They have no special sauce they are as Raymond Chandler wrote many decades ago, "Behind every fortune is a crime", and as Will Ferrell said in the "Land of the Lost": "You can take that to the Bank."

Oh, yeah, let us not forget the magic trick of the rich, "Citizen's of the super rich United." Or as it is known in Paperback "How to undo a Democrcacy for fun and Profit with the easy purchase of a Supreme Court Judge." A best seller evidently...

SCOTUS and their ruling of corporations are people ad wealthy can speak secretly and conspire against heir own country with their secretly spread money.
They speak with their money the court said and money is speech.
And they can speak in secret with their money. They can use "paid speech".
Ignoring money is a government monetary currency for market use.

Not just to hire some hit man to take your enemy out or pay a hooker.
Odd how money for Pharma can be used to purchase drugs to sell but not anyone else (except Wall streeters need for Cocaine).

Notice, the SCOTUS does not address Corporations that are people aborting their subsidiaries and laying off workers .
Corporate mergers nd takeovers always ends up in aborting these "people".
Late term as they be.

I have always marveled how GOP tax cuts go to the wealthy. Including George Soros (the liberal demon himself) and not on republican has a bird drop an acorn on his head to cause awareness.
Why does the republicans give George Soros a tax cut?