David Brooks Doesn't Know When To Sit Quietly And Say Nothing 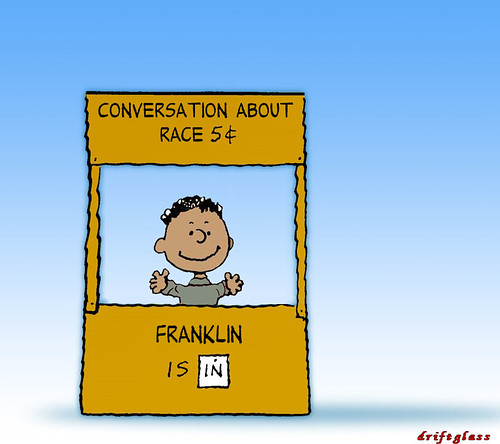 Because he doesn't have to .

Because there is clearly no one at The New York Times with the clout to shut him down or put him out to pasture.  In this way, he is their Sean Hannity or Tucker Carlson.  Bigger than the game...whatever game it is The New York Times is playing.

Today I glanced at The New York Times just long enough to notice that this  was one of those days when Mr. David Brooks decided it was his job to explain to American something about which he knows nothing.

Racism, and how exactly we are measuring up.

This latest in Mr. Brooks' ongoing series of "America: A Land of Contrasts" book reports has statistics and percentages and everything and in three little words, Twitter user Wii Spa summed up my reaction accurately:

Let's judge how accurately Mr. Brooks' instincts about race are calibrated by using two of clearest metrics from The Before Time:  The Fake Tea Party, and the wider Republican freak out over the nomination and election of Barack Obama, starting with a few note from post of mine from A Very Long Time Ago (2008) entitled "The Negrological Constant":

In this election, the predictive model we use to explain our cultural Universe is also deeply warped. Warped by race. Race is, yet again, the 17-ton mastodon in the room, but continues to scud and swirl quietly around the dark corners of American political discourse like errant dust bunnies.

And so the media develops a suite of “Negrological Constants” to explain what is happening in the polls without having to face the reality that we are not a post-racial society.

Not by a damn sight.

Better than we have been? Yes.

Getting better every generation? Yes.

I wrote that in reaction to Mr. Brooks' appearance on the now-defunct Charlie Rose Show where Brooks was completely befuddled as to why Barack Obama was clearly being held to different a standard than Jonh McCain.  From David Brooks during that 2008 round-table:

I think there is no doubt that Barack Obama is much more specific than John McCain. If this were about issues, Obama would be winning by 15 points. The mystery is, why he's not.

Except, of course, it was most definitely not a mystery to anyone who hadn't been a privileged, myopic, white Conservative living in the Beltway media bubble their entire adult lives.

Like Michele Norris appearing on the Charlie Rose Show over the past two nights:

"One thing we've only touched on lightly here is the issue of race, and the polling has shown that many of these voters when they say "he's not patriotic enough", "we just don’t know who he is", "we don’t know what he really stands for", if you dig down a little deeper there are suggestions that some of these issues are proxies for this issue of race."

Like Connie Schultz of the Cleveland Plain Dealer, also appearing on the Charlie Rose Show over the past two nights:

“It hurts me to say, as the child of working class people, what these people were saying. When I get email from these people, there ain't a lot of nuance.”

Connie Schultz: I think Michele makes a very important point about race ... I've been writing about this because I come from the working class, and I am very troubled by some of the things I'm hearing from the working class. About race. And I said, you gotta go home and have the tough conversations with family members.

Rose: What do they say?

Rose (because he is congenitally unable to stop interrupting people trying to finish their sentences): "...an African American?!?"

Anyway, that was David Brooks -- The New York Times' senior Conservative political columnist -- in 2008 staring Republican racism square in the eye and swearing he didn't see a thing.

Here is David Brooks in 2009, cocking his ear at the deafening, racist primal scream of a Republican party reacting to the election of Barack Obama, shrugging, and swearing he can't hear a thing:

Well, I don’t have a machine for peering into the souls of Obama’s critics, so I can’t measure how much racism is in there. But my impression is that race is largely beside the point.

We next encounter David Brooks a year later, in 2010, flashing his PhD in Knowing Racism Stuff in 2010, on Meet the Press, when E.J. Dionne rolled out this inconvenient truth:

Dionne: Look, there is a concerted conservative campaign on part of the movement, a minority of the movement…to use race to split people. Glenn Beck says Obama has a "deep-seated hatred for white people." J. Christian Adams, a Republican activist pushing this new Black Panthers story, says the Obama Justice Department is motivated by a "lawless hostility toward equal enforcement of the law." Now, there are people playing with this racial politics out there. I am not saying, the NAACP certainly isn't saying that this is the whole conservative movement…or most of the conservative movement or most of the tea party. But it's a part of this strategy, and people should condemn it.

Well, it turned out that it was pretty much the whole Conservative movement -- and certainly the overwhelming majority of the GOP base  -- but we'll leave that aside for now and move on to Mr. Brooks' reaction to this inconvenient truth

First, he rolled out his trademark, "Liberals are just as bad in the opposite way" thing:

Brooks: There are liberals who call conservatives racist as a matter of tactics, too

And then, extrapolating from his single, jog-by observation of a Fake Tea Party Rally and a Black family reunion going on near each other that didn't result in a riot, that the Tea Baggers are the goddamn salt of the goddamn Earth.  The best kind of people.  And not at all racist!

Brooks: Listen, I was out jogging. You wouldn't know it to look at me. I was out jogging in the mall. I was at a tea party rally, tea party rally. Also there was a group called the back--Black Family Reunion, celebration of African-American culture. I watched these two groups intermingle, sitting at the same table, eating, watching concerts together. Among most of those people there was a fantastic atmosphere of just getting along on a, on a warm Sunday afternoon.


Four years later, we find David Brooks was reassuring his readers that whatever scary weirdness his party might have been up to, it was over now!  The GOP had detoxified it's brand and there was nothing but blue skies ahead.

Less than two years after that turned out to be utter bullshit, Mr. David Brooks was back on Meet the Press reassuring his reassuring his readers that "the governing wing of the Republican Party" would soon swing into action and save them from both Donald Trump and Ted Cruz by rocketing Marco Rubio to power.


And less than two years after all of that turned out to be utter bullshit, Mr. David Brooks was reassuring his readers that Trump winning was actually a good thing because it was definitely going to usher in a New Conservative Intellectual Renaissance -- a Conservative Intellectual Renaissance so powerful and catchy that it would sweep aside stodgy oldster political thinking and by next summer all the rock and roll kids would be dancing to it in their raves and discotheques and sock hops.

And then there was Brooks' brief non-confessional confession tour, launched during the 2016 campaign, when his job was clearly on the chopping block because he had fucked up so consistently and so very, very publicly on the pages of The New York Times.  Here is a particularly illuminating snippet from Brooks from the still-defunct Charlie Rose Show in 2016:

Rose:  So you think you were wrong?  That you had somehow been on the Acela too much and had not done what?

Rose:  Oh I don't know anybody that saw it coming.

Brooks (smirking):  Yeah, I'm sure now there are people claiming they did but...um...

And right here you can see the  Beltway Common Wisdom being set in concrete.  Since no one saw this coming, everyone failed equally so no one is guilty.  No one is to blame.  And as long as we all agree to pretend that all the lowliest Liberal bloggers -- who had been warning about these conditions within the GOP for decades -- simply do not exist ... and so as long as Brooks promises to do a little painless penance -- to sojourn into the heart of American darkness and compare notes on Edmund Burke with shit-shovelers in Nebraska and pawn brokers in Kansas -- everything will be cool.  Everyone could safely return to their default setting and no one would lose their job just because events had shown that they never had the slightest fucking idea what they were talking about.

Yes, in the grand scheme of things, that's good.

But are the standards at The New York Times op-ed page really so low that a 60 year old ultra-privileged, myopic white Conservative professional haver-of-opinions grudgingly coming to recognize that racism exists in the United States is a story worthy of publication and praise?

Yes, the Times' standards really are that low.

Bobo is paid to flood the endzone in shit. It keeps the Overton window set to stupid.

I'm sorry but somehow I could only read three-fifths of DFB's column on race...

He is the Grand Wizard dragoon of white privilege's.

sort of like the Dylan Roof making his opinion known by gun point at a church's in S. Carolina. Only using print to do it.

As mush as it's hard to stomach DFB columns, I find the people who actually like his horsesh-t even worse. Who are these people? They comment on his twitter feed with things like, "Bravo! Well said." and "I wish everyone had your even minded thinking". I think these people were made in a lab.

Made in a Koch industry Heritage lab?

There is an alternative, Brooks is using bots to twit praise him to promote his sad withering Uni-partisan thought provoking word packing of his articles.

I have friends and family who "appreciate" David Brook's even-handed, fair and balanced take on things. No amount of me putting them straight about how wrong Brooks has been all these years can somehow open their eyes to his whitewashing malevolence.