The Stupids' Tiny Brains Can Only Hold So Many Trigger Words 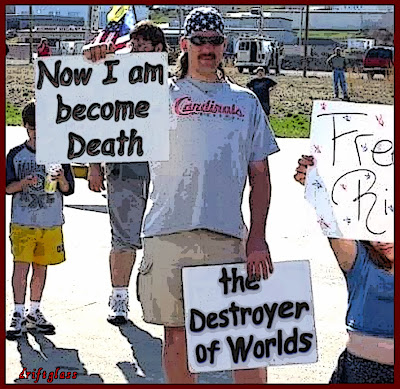 Which is why "Marxist" is back in heavy re-circulation among America's leading fascist propagandists:.

Let me explain this to you. Corporate liberals are woke capitalists. The corporatists love critical race theory and all the other warmed-over Marxist garbage. They sell out working Americans and sneer at them at the same time. That’s the New Left https://t.co/pOrG5NdXsq

For some reason, former OANN pukefunnel and current podcaster, Liz Wheeler, now rates a column in the shabby remains of Newsweek:

Over at Fox, the usual sludge:

And Republican U.S. Senator and Putin Testicle Cozy,  Ron Johnson, knows a jump-on-able bandwagon when one rumbles past his office:

Ron Johnson called Joe Biden 'a liberal, progressive, socialist, Marxist.' Can someone be all those things?

Since the Right has built an entire political movement and a bottomless ATM media money-machine out of calling Liberals everything but a child of God for going on 50 years now, this sort of shit doesn't bother me.
But it never fails to crack me up when some very-recently-former-Republican comes under a fraction of the fire from the same wingnut siege guns that have been pounding away at us for decades -- wingnut siege guns they used to be only too eager to help load and fire -- and suddenly decides that such villainy out-herods Herod!
Because to the Conservative mind there can be no injustice greater, no affront to the aristocratic order of things more galling, than finding themselves being treated for even one minute the way they have routinely, off-handedly been treating Liberals for decades.

Like the goddamn Republicans railing against CRT on the teevee and sputtering to a stop when asked to define it, these choads wouldn't know Marxism if it reached up their butts and slapped their faces.

Josh Hawley: "Let me explain this to you."

Because to the Conservative mind there can be no injustice greater, no affront to the aristocratic order of things more galling, than finding themselves being treated for even one minute the way they have routinely, off-handedly been treating Liberals for decades.

Actually, that second sentence is wrong. There is something else, and there is something more or less. The something else is that any given conservative considers his (and it is usually "his") preferred sorting into in-groups and out-groups as the one Nature and/or Nature's God would make if, in the immortal words of Martin P. Dooley, "He knew th;facts iv th'case." The something more or less is the wide disagreement among conservatives as to whom their pet God has fitted with boots and spurs to ride, and whom with saddles and bridles to be ridden. When they find themselves somehow sorted into an out-group in direct defiance of the Will of Haruhi, it becomes easily understandable that they should squeal like a chicken that got caught in a tractor's nuts.

It has nothing to do with how their children feel in classrooms. They could care less. It has everything to do with keeping people divided and at each others throats, with the hopeful added bonus of getting enraged parents to send their kids to private or charter schools instead.

Those rightidiots. They are Jesuits, I tell you. Jesuits and Jacobins all through their mix they can't understand and they can't sort out.

Just as before Justice will be harshly served on the Jesuits jokers and Jacobin junkies on the political right.

Just watch. They can't explain it and it doesn't wash off.


You have been eloquently saying it for a long time and the republican's became more bold of it and more open of it.

Sure you have free speech, but they do not have to listen because you are not a billionaire, not a billionaires lobbyist and you definitely are not the propagandized and programed zombie hoard they hold up are their grass roots they say they are representing when they are not representing you nor honoring their oath to the Constitution.
All the business that have little care for the freedoms to operate even with their hated taxes and regulations can only realize it once they find themselves having their business controlled by authoritarianism .
They place America on the scale with Taxes and emulations. And the scale tips telling them to fund the GOP even if they see it will tear down the American ideal, and they must lick the Dictators ass to survive.

And they said the mafia needed to be wiped out?

Like many big words, the words don't mean what conservatives think they mean. Particularly after the words have been Luntzized into oblivion and beyond.