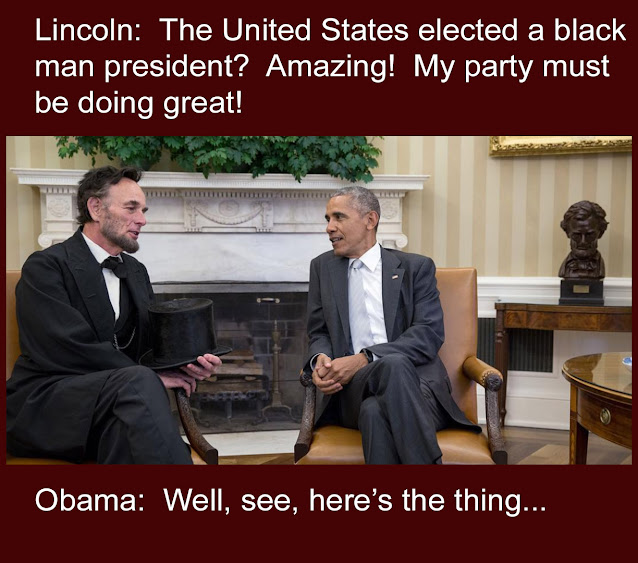 OK, it wasn't five minutes ago.  It two month ago.  April 9th to be exact.  That's when some of our prominent anti-Trump "allies" and their housebroken Liberal friends decided the time was right to scold the Activist Left (tm) for using the phrase "Jim Crow 2.0" to describe the GOP roll-out of new, voter suppress laws in Georgia.

This is taken from the Bulwark's "Beg To Differ" podcast, with Sarah Longwell sitting in for Mona Charen, and the usual panel of  "Damon Linker of The Week, Linda Chavez of the Niskanen Center and Bill Galston from the Brookings Institution and The Wall Street Journal".

Linker:  Well I was with [Joe Manchin] on [never, ever] eliminat[ing] the filibuster, when he says "weaken", uh, I waver...

And right on his heels came Linda Chavez running as fast as her cloven hooves could carry her away from the question of the filibuster itself and instead launched into a long rambling lie about how all of this was the Black Guy's fault because Barack Obama's ruthless bullying of poor, defenseless Republicans during debate over the Affordable Care Act broke the Senate and forced the GOP to become obstructionist monsters.

...Linda Chavez, a consecrated servant in the temple of St. Reagan and the cringy. heavily-lacquered, mothball-smelling aunt who gives copies of Newt Gingrich's "Rediscovering God in America" to her nieces and nephews for Christmas.  Here, via Mona Charen's "Beg to Differ" podcast is how Linda Chavez "remembers" history and assigns responsibility for where we are today.

Chavez: We've had really dramatic legislation offered that is basically just sort of a rush to judgment. I mean it started, um, maybe there were examples before this, but one of the examples that I think was sort of the breaking point for a lot of Conservatives was the Affordable Care Act which, of course, was passed on a non-bipartisan basis.

Yep.  It was that damn Obamacare which Obama just rammed through willy-nilly without consulting anyone or seeking any Republican input.

-- but since my brain stores miscellaneous chunks of everything, I also remembered that this was the same podcast on which this panel of "allies" got up on its hind legs about Democratic Activists (tm) calling what the GOP was up to "Jim Crow 2.0".

I'm wondering how the people who said this less than two

And here is Damon Linker:

Linker:  Well I mean I... I agree with what Linda is saying.  I don't favor that kind of rhetoric either.  I think that what we're dealing with here is that, uh, progressives have decided and this is because of the influence of activists in in the party...

Oh noes!  Not activists in the party!

Linker: ...but you have to judge [the Georgia law] against also the baseline prior to those reforms that were the result of the pandemic and from that it's a kind of muddled up middle.  And some of it isn't great, some of it is better than the way it used to be it but it is not Jim Crow, uh, revisited.  And yet a lot of Democrats on the more activist side of the party have decided both that it's true -- that it is Jim Crow -- but secondly that it's good for them politically to talk that way because they know that most voters won't dig into the details...

Linker:  ...and it's... it's bad for, the, for our politics.  And it brings us right back to where we started on this theme, I think which is why, uh, why we're in this polarized situation and why it is so hard to reach that kind of [Joe] Manchin Middle...

It's his reverence for the "Manchin Middle" that makes it art.

So why bring this up now?

Because anyone who was not born yesterday under the cabbage leaf of the Manchin Middle knew damn well where the insurrectionist, "Stop The Steal" GOP was headed.

Because Georgia was the alarum bell in the night.

And in this country we have a name for the organized effort on the part of a racist, authoritarian minority to thwart the will of the the majority and seize and hold power by brute legislative force

Jim Crow Killed Voting Rights for Generations. Now the GOP Is Repeating History.
More than a century later, another generation of Black lawmakers is battling a familiar enemy.

If that damned-to-hell Rash Lamebrain had not dropped dead they could blame him for their frozen frontal lobes.