Why Is Michael Steele? 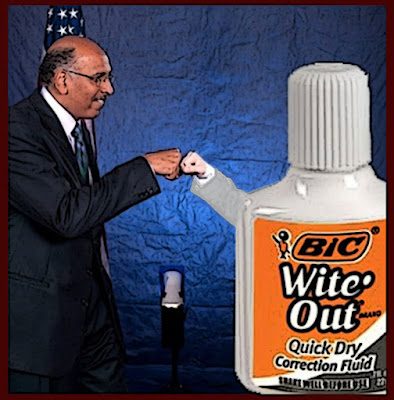 You might remember Michael Steele as the guy who folded like a two-dollar lawn chair when Boss Limbaugh expressed his displeasure at remarks Steele made about him when he was chairman of the GOP.

Or you might remember him as the RNC chair who went on the Sunday Shows during the Obama economic recovery to explain that government-funded jobs aren't real jobs because (not kidding) government-funded jobs come to an end and real jobs never do.  I documented it at the time because A) I was still writing up the Sunday Shows on a regular basis and, B) it was such a singularly stupid argument to make and Steele made it in such a ham-handed, double-talky way that I couldn't imagine that his party would let him go on humiliating himself in their name on national teevee much longer.

Shorter Michael Steele: Bush was awesome. His economic politics were fooking brill. He inherited a recession from the Evil Bill Clinton.

And then came the Stupid Of The Month.

Steele: They don’t count as jobs, because they have an end point.

Stephanopoulos: So people who will rebuild our shitty schools don’t really count as people who have jobs?

Steele: No. Because those jobs will eventually end. They’re just make-work. And private sector jobs never, ever end.

Steele: Sure, but private sector jobs always come back, George. The Majyk Jobs Unicorn brings them.

Wow. So this is now the official policy of the Party of God.

That cops don’t have “jobs”. 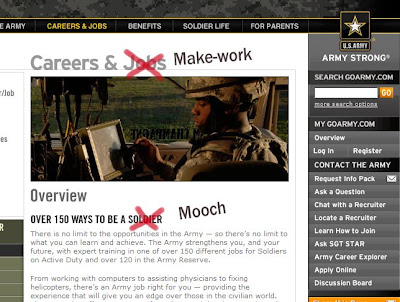 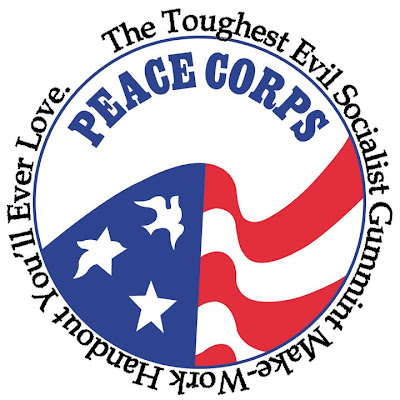 Neither does the Marine Corps.

Consultants and contract employees working the private sector aren’t really really working at “jobs” either, since their contracts eventually end.

The lady who delivers your mail doesn’t have a “job”.

The lifeguard who saved your uncle from drowning at a public beach didn't have a “job”.

The public defender that got your kid a little justice doesn’t have a “job”.

The judge who put the drug dealer who was terrorizing your neighborhood away doesn’t have a “job”.

The auditor who makes hedge fund managers pay their fucking taxes doesn’t have a “job”.

The tech guy who makes sure the computer lab at your daughter’s school can take a beating and still run the next day doesn’t have a “job”.

The hematologist at the county blood bank doesn’t have a “job”.

The gearheads and welders who make sure the buses and garbage trucks run, rain or shine don’t have “jobs”.

The job counselors and case managers at your local employment One Stop also don’t have jobs, even though they are the ones who are going to work like hell to help that laid-off lathe operator find another way to support his family now that the GM supplier he worked for for 22 years has closed its doors.

The air traffic controller who made sure your mom’s plane didn’t slam into a mountain doesn’t have a “job”.

Even though millions of these people may have worked honorably on a public payroll providing vital services for decades – may have put their kids through college, bought a house and retired on that salary – the Chair of the Republican National Committee does not consider what they do to be “real” jobs.

So my mother, who taught her whole life, never had a “real” job.

My dad, who was a principle, was also somehow actually unemployed.

All of the dams my grandpa built wasn’t real labor. And the defense plants he worked at didn’t really exist.

The truly dreadful thing about this is not merely that in Mikey Steele’s world, all of these jobs and thousands more are all just sorta welfarey make-work, but that I’m absolutely sure Mikey Steele believes every single word of the bilge he hawks up.

Because if you want to rise through the ranks of the GOP, you are required to believe this tripe.

It is doctrine. Dogma. The station of the Conservative Cross and the Passion of the Gipper all rolled into one, big, toxic, Randite fattie...

Yep.  That was Michael Steele at the pinnacle of his power as RNC chair.

Or, if you give him any thought at all, perhaps your Michael Steele mnemonic trigger might be "Bondage Themed Night Club".

But above all, Michael Steele is a black man who has spent his entire adult life flacking for an explicitly racist American Fascist Party.  And in the long shadow of Donald John Trump, this is what him especially interesting to me.  Because his flailing, back-peddling, excuse-making mush-mouth double-talk about why he remained loyal to the GOP -- how he could be the chair of the party, and why he still retains his party membership as it was turning itself into a racist monster machine capable of producing a Trump -- is a distilled version of all the excuse-laden "We never knew!" gibberish that is now the mother tongue of the Never Trumpers.

It was not so very long ago that Steele, while acknowledging that the GOP may have had a long and problematic history on the subject of race, still insisted that, as party chairman, he drove the bigots out of the GOP like St. Patrick drove the snakes out of Ireland.  And it was only after he was cruelly betrayed and deposed that all of them in their millions came running back to the Party of Limbaugh.

All of that is, of course, bullshit and everyone knows it, which is why things get especially surreal when Steele shows up in a different venue, such as a Lincoln Project podcast with Stuart Stevens entitled "The Republican Party's Original Sin".  After a long and accurate disquisition from Stevens about race being the GOP's original sin...Steele not only agrees, but goes into greater historical detail.

Suddenly, instead of the hero who drove the bigots out of the GOP and swept the party back to power in 2010, Steele reimagines himself as a noble, doomed Cassandra who warned party leaders that putting a black guy at the head of the party "wouldn't do jack".  That without fundamental reform at the precinct level the party would never change, but the party has refused the advice and recommendations of noble, doomed Cassandras like Steele who have tried to point this out the them.

Then he launches into a long recitation of the history of the GOP which is just surreal.

We hear about "Barry Goldwater and his embrace of segregation".

And Richard Nixon and "his embrace of a Southern Strategy."

And "My political hero, even, Ronald Reagan, starting his presidential campaign in the worst, god-forsaken, racist hole in Mississippi."  Did the GOP think that "black folks were gonna sit there and not pay any attention to that?"

I dunno, Mr. Steele.  You sure as shit didn't pay any attention to it.  In fact, you made such a successful cottage industry out of not paying attention to it that eventually that racist dung-heap of a party hired you to front for them.

Steele wonders aloud that maybe, just maybe, the racist GOP isn't really interested in not doing racism anymore.  Maybe this is just who they are and they like it that way.  Then he ticks off...

And now that the GOP has embraced saying the quiet part out loud?  Now that no one is playing it off as an accident anymore or bother to speak wingnut codetalk and instead are being openly racist and passing racist enabling acts to keep themselves in power?

Steele:  Our party gave birth to that... From Goldwater on.  Understand the reason the reason why daddy King -- Martin Luther King, Sr. -- broke with the party.

Steele:  When Johnson made his break with the segregationist past of the Democratic Party and embraced Kennedy's civil right agenda, that freed up all these white southern men to take their votes someplace else...

All of this spoken as if it had all happened on another timeline, in another universe, where it was all tragic and horrible but somehow had nothing to do with Michael Steele.

These days you can find Steele everywhere.  A paid contributor on MSNBC, on the radio, on his own podcast, guesting on others and at the 92nd Street Y where we learn from the blurb that Michael Steele revitalized the Republican Party!

Because the answer to that question would destroy him.

Email ThisBlogThis!Share to TwitterShare to FacebookShare to Pinterest
Labels: Steele

"it was raining Oreos" - Michael Steele

Narrator: It did not rain Oreos.

"It was raining Oreos" -Michael Steele

Narrator: It did not rain Oreos.

Because he signed a GOP plantation non disclosure. he is not allowed to address the RNC folks that came in to replace him explicitly telling him the only reason he was hired was to be the Token of multi culturalism.
How well it paid him which was more important than the ills born of his actions.

Truth is, when Steele called Rusbo just an entertainer, (note; An entertainer paid by wealthy GOP donors as conservative socialism in support of their party. So was Steele an entertainer.
Although someone like Nicolle Wallace has her imaginary conservative princess world. She does work and tries to do earnest reporting.
It is Steele-mazing to hear him ran down the present white supremacism GOP NAZI ideology to Fascism. Then reiterate he is a loyal member. Mussolini Wasn't a German NAZI, he was just loyal to them. They paid well too.