Over At The National Review...

...keeping up with the ever-increasing demand to memory-hole the past is no job for amateurs (no link because fuck 'em):

Unlike Obama, Biden Doesn’t Even Pretend to Care about Tackling Our Historic Debt
By PHILIP KLEIN
March 24, 2021 6:30 AM
In the 2020 campaign, Joe Biden proudly ran as an “Obama-Biden Democrat.”

But there is already one important difference between Biden and his old boss: Obama used to at least pretend to be concerned about our long-term debt, while Biden isn’t even going through the motions.

In his rush to bunch up his Fiscal Responsibility Panties and keen like a banshee about president Joe Biden, Mr. Klein seems to have misplaced at least four Republican presidents I could name.
Presidents who swore on the graves of their ancestors that their gargantuan tax cuts would end up paying for themselves.

This is such a weird article because it finds Mr. Klein in the same wingnut limbo as other Very Serious Conservatives, stranded between two irreconcilable desires: the desperation to scurry back to some Conservative safe space of performative outrage over deficit hawkery or abortion or guns or whatever and the fact that, at the moment, Conservative revisionist scientists have not yet cracked the technology to make the history of the Trump years disappear.
And so, temporarily robbed of a high horse from which to glower down at president Joe Biden and we dity, commie Dems, Klein must instead awkwardly stumble through (as briefly as possible) the Very Serious Conservative's ritual head-fake that somehow Trump and "Trump-era Republicans" were sui generis and in no way related to the party that spawned them.

Trump-era Republicans not only ignored entitlements and failed to repeal Obamacare, but they ditched the crowning achievement of the Tea Party by nuking the spending caps put in place by the 2011 debt-ceiling deal.

Once that ritual is completed, Klein can then go on to pretend that there was once some Golden Age of Republican budgetary prudence:

And that because of Trump's unique profligacy, Democrats now have an excuse to treat all of that Conservative deficit zealotry during the Golden Age of Republican budgetary prudence as so much flapdoodle.

The drastic shift convinced Democrats that all the Tea Party Republican talk about fiscal responsibility was merely a bad faith way to thwart liberal policy priorities. As Democrats now see it...

This is unresolvable paradox facing all Very Serious Conservatives who still demand to be taken very seriously.  They cannot let go of the depraved ideology and pandering-to-bigots-and-lunatics electoral strategies that gave them real political power, but they also cannot explain how Trump could have come be were it not for their depraved ideology and pandering-to-bigots-and-lunatics electoral strategies.  It's as if the engineers who built the Hindenburg and flew it smugly across an ocean...and then watched it crash and burn... 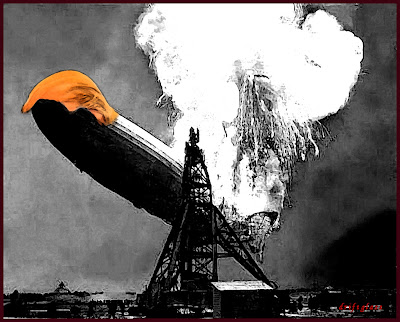 ...held a press conference in the still-smoking debris to insist that, well, yeah, sure, that giant sack of hydrogen was problematic, but that was just a crazy, fluky, one-in-a-million thing and in no way an indictment of our whole concept of filling giant sacks with hydrogen and flying them over population centers.

Who funds the National Review?

Many of the same people who fund the Federalist, whoever they are.

Oddly enough me and some others voted for Joe Biden that ran as a Obama-Biden Democrat.
All the TEA party republican fiscal conservative KOch-ettes congressmen voted to borrow $2 trillion smack in the very debt they railed against for 8 TEA partying years.

So the national Review can get together
with the OANN elementary school staff and wonder what the infamous "Q" would say.
For their information "P" is higher in the echelon alphabet than Q.

Reportedly, the National Review started out with CIA $$$ but I could be wrong.

Yeah, me too. I just wish the hair was on fire.

Republican demand from the minority to care only about what the republicans tell them to care about and most of this caring is something they didn't seem concerned to display the entire last four years;

I mean, in 2017 The infamous TEA Party The well renowned no tax and no spending Koch dudes. Decided in the midst of all the debt they railed over the last 8 yrs, it was fine to borrow that $2 trillion. You have to know their owner Koch Industries gave them permission to spend and borrow now that the President was white.
the morals, virtues, fiscal responsibility it takes to tell others to do exactly what you would never do is an ideology that takes you where?
I am only surprised that George Soros got a tax cut and Putin did not. After all he gave to the NRA and the GO for election.

Aww, now, let's not be too hard on the great zeppelins. Only two of them "crashed and burned" with any fare-paying passengers on board, and none over any population center; one, the Hindenburg, exploded over a remote Naval airfield and the other, the British R101, ploughed into a French hillside in the middle of the night and burst into flames.

The most fascinating thing to me about giant rigid airships is that the technology still seems implausible even though it's been obsolete for nearly a century.