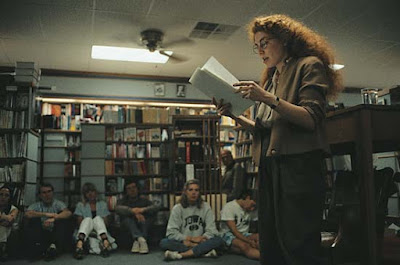 At any given time there are there are five, distinct, non-overlapping public political narratives going on simultaneously in America and four of them are either Conservative or Conservative-enabling.
They are as follows.

1.  Both Siderism.  The following is from back when I was a commenter at The News Blog in 2004.

Q: If Dick Cheney were caught red-handed tossing burning kittens at homeless veterans from the White House lawn, what would be the first three words out of Cokie Roberts' mouth?
A: "But the Democrats...."

I mention it because Both Siderism and the glorification of a fictional "center" in response to every Republican atrocity has been the lazy, toxic, go-to Big Lie for the mainstream media for far longer than I've been writing this blog.   Other than Conservative Hate Radio/Fox News, no force in the American media has been more effective at shifting the Overton Window radically to the right.
Rating:  Conservative-enabling.
2.  Conservative media.  The massive, well-funded ecosystem of radio networks, teevee networks, churches, book publishers, book imprints at mainstream publishing corporations, newspapers, think tanks and various low-brow, medium-brow and and high-brow publications.  You know who they are and you know the damage they have done.
Rating:  Conservative.
3.  Dry-Drunk Republican media.  A much smaller ecosystem of anti-Trump Republicans who were run out of their party, whose media startups were then immediately underwritten by wealthy donors, and who have been handed book contracts, op-ed gigs and privileged, reserved-seating on cable teevee.  Dry-Drunk Republicans are Republicans who have largely given up the demon rum of party affiliation because of Trump, but still believe in the demented Conservative ideology that made Trump possible.
Rating:  Conservative.
4.  Red Rose Left.  A still smaller, but Very Loud niche market.

These Greenwald-wannabe trolls and useful idiots accomplish nothing except building a brand and convincing some of the weak-minded that voting is pointless.

He's basically a Russian troll. That's a big part of what they do, build a following pretending to be decent Democrats, then slowly try to influence their followers to become more extreme, & eventually encourage them not to vote. Helps Trump & encourages divisiveness, a 2 for 1.

Rating:  Conservative-enabling.
5.  Liberal/Progressive/Democratic/What-have-you.  The sprawling, raucous, infighting caucus of everyone else who, broadly speaking, wants to move the country forward -- a process which rarely happens in breathtaking leaps but instead in halting, maddening, grinding half-steps.  Often loosely defined as "The Left" and never been better described than by Will Rogers, "I am not a member of any organized political party. I am a Democrat."
Rating:  Awesome, chronically-underfunded and occasionally self-defeating.
If you're wondering why you're so damn tired, it might be because in the public square you're routinely outnumbered 4-to-1.

"My Pet Goat", is still a conservative favorite.