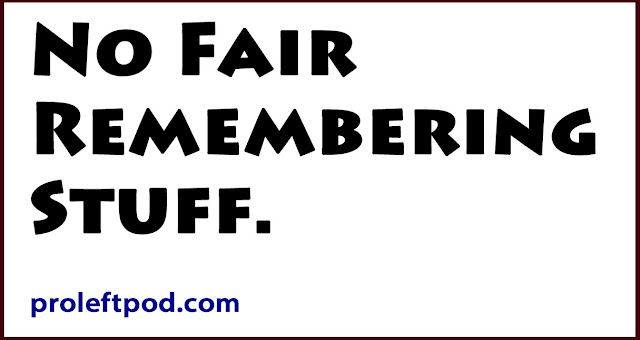 Respected MSNBC contributor and editor-at-large of The Bulwark, Bill Kristol, is deeply, deeply disappointed with his former street gang because every decent person knows, if you say some shit and it turns out to be wrong and people get hurt, you apologize for that shit.

I know this because Bill Kristol was the featured guest on The Bulwark today and I heard him say it there   Let's listen in with some emphasis from me to draw your eye:

Kristol:  ...As I think any decent person would say, in a similar circumstance, "You know what... I... I... I didn't mean, of course,  for people to [inaudible] and storm the capital.  I meant, y'know let's have a legal process." I mean they can reinterpret their own words.  And "I'm very sorry if anyone misunderstood me and I apologize for the terrible things that happened for if I inadvertently contributed to them."

Now I don't think in all these cases it was so inadvertent, but that would be at least the minimal thing one would do

I was trying to think about myself, or you, or anyone, y'know in a situation where you might have said something maybe a little bit heated.  In some moment some people, y'know, do something really pretty bad as a result -- not as a result of what one says but in accordance. Let's just say with what one says one feels terrible right? You say "That's not what I meant" and "I... I... I really I'm sorry and I... I... regret that.  I'm gonna be more careful in the future."

For example, does anyone remember the Iraq War?  Anyone?

It was an ideologically-driven Bush Administration clusterfuck that Republicans lied us into and about which Bill Kristol had many very definite opinions, some of the best of which were almost lost to history.  But here, thanks to  Common Dreams are excerpts from a C-Span interview with Bill Kristol from March of 2003 which is such a farrago of smirking, jaw-dropping bullshit that you have to read to believe it:

I'm talking about Kristol's two-hour appearance on C-Span's Washington Journal on March 28, 2003, just nine days after the President launched his invasion of Iraq. No one remembers it today. You can't even fish it out of LexisNexis. It's not there. Yet it's a masterpiece, a double album of smarm, horrifying ignorance, and bald-faced deceit. While you've heard him play those instruments before, he never again reached such heights. It's a performance for the history books -- particularly that chapter about how the American Empire collapsed.lost-kristol-tapes

For our purposes today, I want to bring one particular quote to your attention.  It's at the very end where Kristol confidently declared that he would be glad to be held to a "moral standard" should all of his prediction and grand promises turn out to be dead wrong.

"The moral credentials of this war are strong. We'll see if we follow through. I agree with Mr. Ellsberg on this, if we're not serious about helping the Iraqi people rebuild their country and about helping promote decent democratic government in Iraq... it will be a much less morally satisfying and fully defensible war... I'm happy to be held to a moral standard. I ask that it be a serious moral standard."

Of course all of his prediction and grand promises did turn out to be horribly, lethally wrong.  And, of course, since making that promise Bill Kristol has never been held to any standard whatsoever because men like Bill Kristol are members of the Beltway Insiders Club whose prime directive is protecting the reputations and livelihoods of members of the Beltway Insiders Club.

This is why I have occasionally reacted with asperity (look it up) as my Liberal allies threw themselves at Bill Kristol and men like him drunk-prom-date-fashion because, yeah, sure, on the one hand there's his record of a lifetime spent gleefully in the service of evil, hundreds of thousands of lives lost, nations ruined and a treasury looted all while Kristol maintained a constant barrage of slander and smirking lies that just kept escalating precisely because Bill Kristol has never been held accountable for anything...

...but in the other hand, we can't hold him accountable now because Trump!

So given Bill Kristol's very definite opinions now about how Republicans should apologize for encouraging "something really pretty bad",  how do you suppose Mr. Kristol would react should anyone suggest that he apologize for using using his privileged media position to relentlessly pimp the Iraq War and to ferociously attack anyone who opposed or criticized him ?

Well lucky for you, chum, you don't have to guess because here is pre-Trump Bill Kristol back in 2014 answering that very question:

Bill Kristol Snaps At Calls To Apologize For Iraq War Support
...
Despite his history of being wrong about Iraq, Kristol has nevertheless seen his media bookings rise in the wake of the spread of militant group ISIS. On Thursday, CNN’s Erin Burnett asked him about Reid’s tweet. Kristol, unsurprisingly, made it clear he was an unrepentant hawk.
“I’m not apologizing for something that I think was not wrong,” he said. “The war to remove Saddam was the right thing and necessary thing to do.”
“Apologies would be in order for the neoconservatives who banged the war drums so disastrously, Bill,” fellow guest Carl Bernstein chimed in.
“Hogwash!” Kristol replied. (Yes, he actually said “hogwash.”)

Here is post-Trump Bill Kristol less that two years ago reiterating his position:

Nope. I dislike quasi-Stalinist demands for apologies. I've defended and will defend my views on Iraq, and Syria, and Milosevic, and the Soviet Union, and more, as you defend yours. How about a real debate on U.S. foreign policy--I'll ask for no apologies!--on a campus this fall? https://t.co/AdC0CelINz

At this point I know perfectly well that the fight to hold men like Bill Kristol accountable is over.
That it was over once MSNBC changed almost literally overnight from a network where Good Doctor Maddow was free to go on an extended "Why the fuck does a fucking always-wrong hack like Bill Fucking Kristol have a job anywhere opining about anything?"...
...to a network where Bill Kristol is now a serious and valued Conservative Big Thinker and contributor and you can't swing a dead cat without hitting him or one of his equally always-wrong Bulwark Buddies coming and going from one MSNBC program to the next.
I know that the outcome of this fight was foreordained by decisions made in corporate boardrooms by people who I will never know long before I put digits to keyboard to ask variations on the question, "Why does Bill Kristol have a job anywhere opining about anything?" 1000 times.
Yet for some, mad reason I continue to believe that someone, somewhere should say these things, out loud and in public, despite the fact that so many of my "allies" wish I would please just shut the fuck up.  So to them I say, don't worry and be of good cheer.  I'm just a nobody Libtard blogger out here in the middle of Middle America.  Nobody listens to me anyway.  And if, by chance, it turns out that I wrong,  I'm happy to be held to a moral standard.
Just like Bill Kristol!

Email ThisBlogThis!Share to TwitterShare to FacebookShare to Pinterest
Labels: Kristol

I believe it was 2013 when I was first told that "it was the Democrats who talked Bush into attacking Iraq, not the other way around."

So some are astonished at things like giant Jewish space lasers (made in the shape of Menorah) use to start California fires. Not used to thwart terrorists lobbing bombs on them or laser tagging the Iranian Nuclear Deli. To stop their Nuke production.

that surprises people after GW Bush left office with the country in a great depression and deeply in debt with million out of work and having their homes taken by Wall Street Banks that got such a large bail out they never felt a thing. That they needed to pay out enourmous amounts of money as bonuses to keep their people who ran them into the ground employed to now make it all good?
Blamed it all on Obama in his first month?
That Obama was responsible for the bail outs that was passed and signed into law in 2008 when Obama was not president.

Memory helps ones perspective but it does not stop your Rep QANON Greene's or Jimmy Jordans from coming up with more lies to feed their Zombie Base that wanders in hunger for live flesh to eat.

Remember when Bill Clinton took away the tax write off from working people credit card interest rate s they paid and only companies could then use that tax write off.

Let me test your memory on this, Who got the benefit of taxes when the credit card interest rate as a deduction was taken away from the populace?

Businesses retained that write off? What president did that?

Thank you so very much. Watching Kristol get even limited adoration because of his opposition to Trump has jaundiced my good eye almost as much as has seeing Liz Cheney get lionized because, for once, she was honest and blasted Trump harder than 90% of congressional Democrats. Of course, when Barack Obama took the oath of office in 2009, Liz and Bill set up Keep America Safe to return the GOP to the golden years of neo-neoconservativism. When she decided to run for office in 2013, Keep America Safe vanished from the web and everywhere else. But Bill and Liz have since carved themselves out a public niche of respectability from which they would like to resurrect the terrible old Republican Party will (perhaps with a new moniker) to replace the unspeakable new Republican Party.