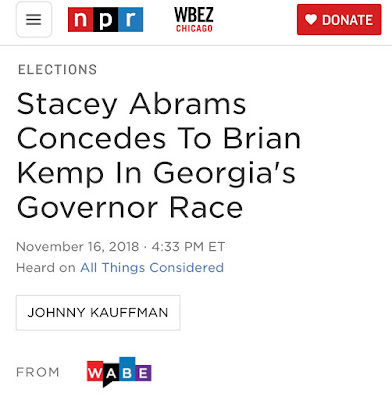 If after four years of sustained, berserk attacks on the fabric of Reality by the Republican Party, this is where NPR has landed, then I'm afraid that institutional Both Siderism is indestructible.  A parasitic organism that has latched onto the throat of our democracy and will never let go.  There is no way to repair or rehabilitate the media because the mindset is too hardwired into their business model, the careers of too many influential voices in the press are built on it, and too many young minds are irreparably warped too early on and too deeply as they are coming up and osmosing the norms of their profession.

So instead of wasting a lot of words on an institution the insists on committing suicide in plain sight, I'll leave you with a snip from a thing I wrote nearly a decade ago:

Here Comes a Candle to Light You to Bed 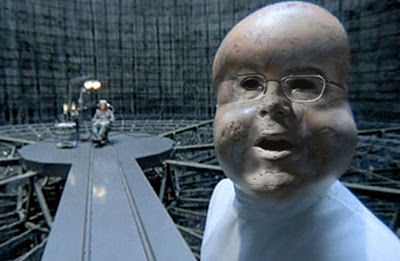 Here comes a chopper to chop off your head.
In case you were wondering, every time I hear or see or read the same, lavishly remunerated sock puppets jackhammering home the same, patently false Centrist narrative for the umpteen millionth time from impregnable media fortress that reach several million more people a week than I ever have or ever will, this is what it sounds like to me:
From "Brave New World":

"What's the lesson this afternoon?" he asked.

"We had Elementary Sex for the first forty minutes," she answered. "But now it's switched over to Elementary Class Consciousness."

The Director walked slowly down the long line of cots. Rosy and relaxed with sleep, eighty little boys and girls lay softly breathing. There was a whisper under every pillow. The D.H.C. halted and, bending over one of the little beds, listened attentively.

"Elementary Class Consciousness, did you say? Let's have it repeated a little louder by the trumpet."

At the end of the room a loud speaker projected from the wall. The Director walked up to it and pressed a switch.

"… all wear green," said a soft but very distinct voice, beginning in the middle of a sentence, "and Delta Children wear khaki. Oh no, I don't want to play with Delta children. And Epsilons are still worse. They're too stupid to be able to read or write. Besides they wear black, which is such a beastly colour. I'm so glad I'm a Beta."

There was a pause; then the voice began again.

"Alpha children wear grey They work much harder than we do, because they're so frightfully clever. I'm really awfuly glad I'm a Beta, because I don't work so hard. And then we are much better than the Gammas and Deltas. Gammas are stupid. They all wear green, and Delta children wear khaki. Oh no, I don't want to play with Delta children. And Epsilons are still worse. They're too stupid to be able …"

The Director pushed back the switch. The voice was silent. Only its thin ghost continued to mutter from beneath the eighty pillows.

"They'll have that repeated forty or fifty times more before they wake; then again on Thursday, and again on Saturday. A hundred and twenty times three times a week for thirty months. After which they go on to a more advanced lesson."

Roses and electric shocks, the khaki of Deltas and a whiff of asafœtida–wedded indissolubly before the child can speak. But wordless conditioning is crude and wholesale; cannot bring home the finer distinctions, cannot inculcate the more complex courses of behaviour. For that there must be words, but words without reason. In brief, hypnopædia.

"The greatest moralizing and socializing force of all time."

The students took it down in their little books. Straight from the horse's mouth.

Once more the Director touched the switch.

Not so much like drops of water, though water, it is true, can wear holes in the hardest granite; rather, drops of liquid sealing-wax, drops that adhere, incrust, incorporate themselves with what they fall on, till finally the rock is all one scarlet blob.

As corrupt and crippled as our politics has become, our system still demands that, every few years, the people who make our laws undergo a certain amount of scrutiny and an up-or-down hiring decision by the people they propose to represent.
But as you may have noticed, that scrutiny is now routinely bent out of shape -- so wildly distorted that on any give day all we seem to have is a choice of poisons; a fire-hose of relentless Conservative lies, irrelevant trivia, breathless horse-race gibberish, poll number recitations and 30 second ads.
And that is because the deciders who dictate the parameters of that political discussion -- the Villagers who conspire to whisper "I'm really awfuly glad I'm a Beta, because I don't work so hard. And then we are much better than the Gammas and Deltas. Gammas are stupid. They all wear green, and Delta children wear khaki." into our nation's ears a hundred times a day from a dozen angles -- are themselves almost never scrutinized and held to account at all...
Driftglass' Twitter Jail Legal Defense

The media's take? "Both Sides use shovels!"

Which, while technically true, is not particularly helpful.

That's a terrible article. If it was written as it stands, it's awful. If it was re-arranged by her editor, that's even worse.
Why were these the fourth, fifth, and sixth grafs:

"The president's eldest son, Donald Trump Jr., visited Georgia to pledge on his father's behalf that the campaign would fight on. At a rally with about a hundred supporters, he and other pro-Trump leaders repeated their claims about alleged fraud.

Trump Jr. told Georgians he had "lost all faith in the process."

"I think the number one thing that Donald Trump can do in this election is fight each and every one of these battles to the death so that we get full transparency in the process," he said."

...while these all the way down were the eighteenth and nineteenth grafs?:

"In a statement issued after this story was first published, Seth Bringman, Abrams' spokesman, said her situation in 2018 and Trump's today are nothing alike.

"We had a coherent and well-documented case about why the system failed voters, in truthful and complete sentences. Now, Donald Trump has no evidence and no argument, and thanks to the work of Fair Fight Action, everyone including Donald Trump can have confidence that voters spoke and Joe Biden won," said Bringman."

And then this, waaaaay below at grafs thirty and thirty-one:

"One big difference between Abrams' refusal to concede and Trump's refusal lies in the goals of their questions, said Sara Tindall Ghazal, the former voter protection program director for the Democratic Party of Georgia.

In other words, Abrams didn't try to challenge the results."

WHAT THE HELL? Really, NPR?! Pull quotes from Beavis over Abrams' spokesperson in an article (and a headline) reeking of gross false equivalence. That's just fked up, man. Stop normalizing Trump's behavior! (and that of his horrible children as well) It's not helping.

This isn't part of some sort of "unity" pledge drive, is it? You really think they're gonna start tuning in to NPR at midwestern diners when the ABC/NYT crew walks in to take the temp of Trump voters?

Sometimes I wonder if we wouldn't be better off with functioning propaganda ala A Brave New World. I mean, we'd be in pretty much the same situation, but we'd be brainwashed enough to just accept it as it is and move on.

Self-awareness can be a real son-of-a-bitch.

Also, the skill in which you describe the depravity of our society is beautiful. I can't say that enough, you're still my favorite blog. Finally decided to make it a monthly subscription, because how could I not pay my favorite writer?

Look, the Word came down from Corporate, from Downtown, from MITCH and MURRAY. Some of you reporters are gonna do well. First prize is a new Cadillac commentators contract. Second prize is you keep your "I-can-afford-new-steak-knives" reporter's position. Third prize is you're fired. Now you all are going to go out and tell these people that the Stacey Abrams refused to concede just like Trump. And some of you will wonder whether that is true. But I want to remind you of something - ABC: A-audience B-buys C-commercials. AIDA. Attention Interest. Dispersion. Addiction. So. Nice guy? I don’t give a shit. Good father? Fuck you, go home and play with your kids. You wanna work here? Commentate. Enrage these people to the point where the do WHATEVER we tell them to. ‘The stories are weak.’ Fucking stories are weak? You’re weak. I’ve been in this business fifteen years. … Fuck you, that’s my name. You know why, Mister? ‘Cause you drove a Hyundai to get here tonight, I drove an eighty thousand dollar BMW. That’s my name. And your name is you’re wanting. And you can’t play in a man’s game. You can’t close them. And you go home and tell your wife your troubles. Because only one thing counts in this life. Get them to listen to what we are selling. You got the listeners comin’ in; you think they came in to get away from the rap music? Guy doesn’t tune into this station unless he wants to buy. Sitting out there waiting to give you their money! Are you gonna take it? Are you man enough to take it? What’s the problem pal? You. …You see this watch? You see this watch? … That watch cost more than your car. I made $970,000 last year. How much you make? You see, pal, that’s who I am. And you’re nothing.

As I recall the start of the looking away at NPR was during the bush II distortion and privatization so Corporate could get hold of the proper sales messaging. And now we see it has come to full quarterly profit expectations.

There are several factors of aggrieved superiors race failures.

There is denials based on multiple drivers like, Alternative Facts. My superior religious Beliefs. The dark money compels me. And the classic, I have been institutionalized and I owe it to my mom and dad who brain washed me since I was born, to be a life long republican (no matter what).