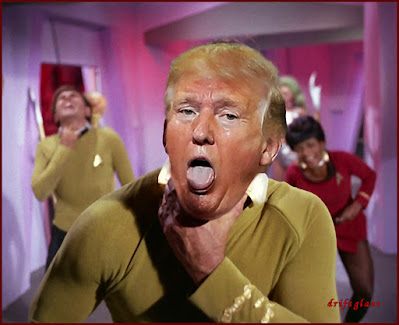 And now the debate commission stands exposed as just one more sclerotic American political institution daintily trying to sidestep the obvious problem that there are no "addition structures" which will civilize a contest when one of the participants is a lying, bomb-throwing sociopath.

JUST IN - The Commission on Presidential Debates says it will adopt changes ahead of next debate pic.twitter.com/Ok6U1Yme2v

Because without a shock-collar on President Stupid and a kill-switch on his microphone and an on-site team of fact-checkers who are given equal time to assign the appropriate level of "Pants on Fire" to every lie coming out of his mouth, there is no way on Earth to stop Trump from turning any "debate' into a shit-flinging madhouse.

Email ThisBlogThis!Share to TwitterShare to FacebookShare to Pinterest
Labels: Debates

I was listening to the debate while on the computer with my aunt, exchanging emails. I Something etched into my mind, when he said that he is doing better than any other Republican politician, I immediately shot off to her:
-- He's doing better than any other republican because he will stand at the podium and shout, "Fuck Lee Atwater! It's not 'bussing bussing bussing'! It's 'n~r n~r n~r'!"

And within a minute, my aunt and I emailed each other "Oh, God, did you hear that!?!" as he was talking about the toxicity of critical race theory in history education.

As bad as the 2016 debates were, I don't think any were that horrible.

Mr Depend doesn`t give a dump about rules ONLY the ones HE makes up .

I saw this comment that immediately reminded me of Mr. Glass here;
https://nextdraft.com/archives/n20200930/sole-crusher/

"SOLE CRUSHER
One of things we learned last night is that the media still hasn’t adjusted to the Trump era. The immediate headlines continued a never-ending streak of false equivalence and both sides-ism. One guy lies constantly. One guy is a bully. One guy has dragged America’s reputation into a bottomless pit. One guy turned last night’s debate into a debacle. And yet, just after the conclusion of the broadcast, these were some of the headlines I screen captured, all of which give the impression that both participants were equally responsible for the disaster.
NYT: Sharp Personal Attacks and Name Calling in Chaotic First Debate. WaPo: Personal Attacks, Sharp Exchanges Mark Turbulent First Debate. CNN: Pure Chaos at First Debate. AP: Debate Anger: Biden Tells Interrupting Trump, “Shut Up, Man.” Boston Globe: First Debate Between Trump, Biden Marked By Chaos, Rancor as Candidates Made it Personal. LA Times: Trump and Biden Trade Bitter Personal Attacks in First Debate. Bloomberg: Trump-Biden Debate Descends into Bickering and Chaos. Time: Shouting Over Each Other.
Yeah, it was just a couple of guys who were both losing their cool, and there are some very fine debaters on both sides. Give me a break. The debate did not “descend” into bickering and chaos. It was dragged there by the same monster who has dragged America to this maddeningly dangerous precipice. By morning, many of these headlines had been updated to more accurately depict what we all saw and heard. But the knee-jerk response was towards the false equivalence that has propped up Trump for years."

If one of the participants interrupts or speaks over the other, the one who was interrupted shall be awarded extra time to speak, or the rude person shall have time subtracted from his next chance to speak, or both.

Shock Collar, Mic shut off button, and a stronger moderator have been tossed out.

How about an electric shock but plug? These aren't children. They are adults and even though one of them might be mentally impaired and claim his childish behaviors as "get used to them". He would be tried in court as an adult. As with his Fraud University and unlike his Senate trial that his daycare workers wipe his poopy crimianl butt.

I wanted to suggest, as sorts . They have several referees/ umpires. Was that a fair ball or in foul territory.
Was that pitch just outside for a ball? White flags being tossed on the play for unnecessary roughness with a penalty of 15 yards (or lost time.

Hey , there is the Penalty box for misbehavior is Hockey.

You see, I am tired of being told as a citizen voter that politics is not bean bag but it is a blood sport.

As one of the major political parties. How does the republican place their leader out their like this and not have to take responsibility as a team. Penalty 10 yards. They do not just force the individual back 10 yards. The entire team is moved back .

Of course an Umpire can eject a player, a coach for misbehavior.

Perhaps wiring them up on a lie detector with he visual on the needle when candidate speaks.
There is always truth serum.

Putting them under oath. Penalty of perjury with time in jail while lying to the public from an official position .