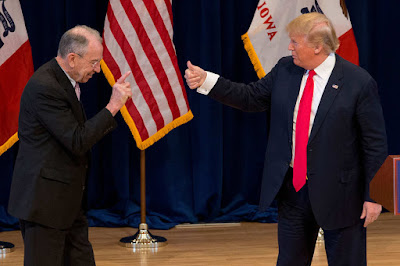 Did you know that Donald Trump and Chuck Grassley share a trusted mutual friend?

It's true.  They are both very tight with the famous Manny Peeple!

And based on Manny's sage advice, Chuck Grassley has built his life on these two rules.

Rule 1:  If Chuck Grassley hears that Manny Peeple believes a thing, then dammit, Chuck will tend to believe that thing is true too!


Maria Bartiromo asked Chuck Grassley this morning if he thinks George Soros is paying the elevator protesters. "I have heard so many people believe that. I tend to believe it," Grassley said. Trump tweeted the accusation about 80 minutes later pic.twitter.com/az8QtMZwma
— Dave Brown (@dave_brown24) October 5, 2018


Rule 2:  Except, of course, when "Manny Peeple" are sexual abuse survivors, because you know what a bunch of flighty, extreme, Liberal, Clinton-stooging, Soros-dark-money-funded crisis actors those people are.

Trump is not the creator of "Many people" for his agenda excuse to perpetrate the oligarchy's paid in cash under the tax exemption desired whims to make new rule the pawns on the chessboard must endure to make them feel the comfort that "many" had under the Hoover years.

It was George Soros who funded FDR and so harmed the oligarch's feelings.

I noticed the Kavanaugh open conspiracy speech where he specifically lashed out at the horrible law of Citizens United allowing anyone opposing him to have the Citizens United ruling apply.

I have never met anyone that considers themselves the GOP Base. That reads Brooks. The Alex Jones listeners do not read Brooks and leads me to state that they do not read Erick the Erickson.

Did Erick Erickson or Brooks ever take money from the Soros?
Would they tell us if they did?

I've heard many people say that Senator Chuck Grassley is actually a giant slug wearing an ill-fitting skin suit, made from the flesh of his illegitimate offspring.

I've heard enough people say it, so I can't help but to believe it.

I would like to donate a small monthly stipend to Driftglass, but after a couple of really bad experiences, refuse to use PayPal ever again. Is it possible to donate some other way ?