Ron Fournier: The Triumphant Return of the America's Sad Clown of Centrism 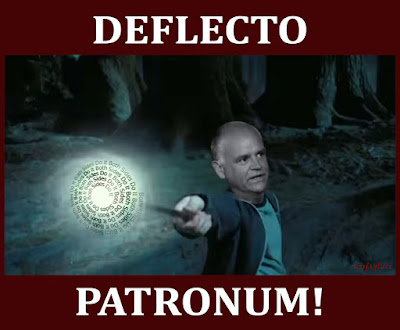 Admit it, you thought Ron Fournier was gone forever.

He who was once Matthew Dowd's False Equivalence spirit animal.

He whose only job during the 2016 election was squatting on cable teevee panels and croaking out phrases like "It's Both Sides" and "The K'rupt Duopoly" in the face of  every act of Republican depravity.  Gone back to Detroit to write about local politics, because the administration of President Stupid had so completely vaporized Mr. Fournier's career as America's Sad Clown of Centrism.

Or so you would think.

But you would be wrong.

Because as long as Both Siderism remains the corporate media's indestructible business model -- as long as there is an ocean of stupid, desperate money sloshing around inside the Beltway to bankroll anyone who will spin Prince Prospero's courtiers the Both Siderist fairy tales they desperately wish to believe -- toxic parasites like Mr. Fournier will always rise from the wreckage that they create, dust themselves off...

...and go right back to their default setting, unperturbed.

And thus it was in yesterday's Washington Post, where Mr. Fournier first-ever bylined column in that publication --

Nov. 6 could be independents’ day

Ron Fournier, a former reporter, editor and publisher, is president of Truscott Rossman, a Michigan public relations firm. Unite America is a client.

For years as a political reporter in Washington, I wrote about the public’s disgust with the U.S. political system and predicted the rise of a third party and outsider presidential candidates. I railed against the Republican-Democratic duopoly and chased the mythical “white knight” who would put country over party — and then put the two major parties out of business.


I was hunting a unicorn when I should have been herding reindeer.


While a viable third party is as elusive as a horned horse, there exists a rare-but-real creature in American politics that can systematically dismantle the status quo: the independent. Untethered to the two major parties, growing in sums and significance, independent candidates and officeholders are the reindeer of American politics...

But, eventually and incrementally, this may be the path to radically re-center American politics.


If these creatures can be corralled into controlling coalitions in legislatures across the country, including the U.S. Senate, they could find a powerful leverage point to break the partisan fever....

-- was an 800 word advertorial for one of the clients for whom his PR firm flaks:


Having left Washington for my hometown of Detroit two years ago, I have been drawn back into politics by the pragmatic elegance of Unite America’s mission...

This was the signal to his fellow WaPo haver-of-stupid-opinions, Joe Scarborough, that Mr. Fournier was ready to resume his duties as a America's Sad Clown of Centrism.

And so, this morning... (from Susie Madrak at Crooks & Liars):

The infamous Ron "Both Sides" Fournier has structured his pet fetish into a superPAC called Unite America, and he was out selling it on Morning Joe today, pointing out there are more independents than either Democrats or Republicans.

Susan Page said there's "some concern on the part of some Democrats that the rise of talking about third party and independent candidacies in this midterm election could help Republicans because it could be a place for Republicans who are Republican-leaning voters who are unhappy with the Trump era, give them a place to land without voting for Democrats. Do you think there is a partisan impact? I realize there's not a partisan intent by the movement, but is there a possibility of a partisan impact from it?"

And thus it came to pass that, after the eight years of out-and-proud, fangs-bared racism, slander and sedition the Republican party displayed during the Obama Administration, and a year and a half of clear and irrefutable proof that Donald Trump and the Republican party are an existential threat to democracy, Both Siderist schlock peddler Ron Fornier has landed --


Why are there so few independents elected when there are so many independent voters? The single greatest barrier to change is the question of viability. People don’t want to waste their vote. With an angry electorate and more-competitive independent candidates, that may soon change.

Liberals and conservatives each have their own intellectual food chains. They have their own think tanks to provide arguments, politicians and pundits to amplify them, and news media outlets to deliver streams of prejudice-affirming stories.

Independents, who are the largest group in the electorate, don’t have any of this. They don’t have institutional affiliations. They don’t look to certain activist lobbies for guidance. There aren’t many commentators who come from an independent perspective...


-- after eight years of Republican catastrophe, corruption and dereliction had nearly wrecked the country and sent professional Beltway frauds like Mr. Brooks flailing around desperately for some excuse not to blame Republicans for the atrocities of the Republican party.

In a real and tragic sense, this was the corporate media's own Lynndie England/Abu Ghraib moment:  the moment of fatal institutional cowardice when powerful and unaccountable people reached a collectively decision behind closed doors that no one of any importance to the media's business model -- not the Republican party base, not the GOP leadership, not Fox News, not Hate Radio and certainly not themselves -- would ever be held accountable for the multiple, catastrophic failures that during the Bush Administration.

This was the moment when Conservatism's long war against the "Liberal" media achieved final victory.  The moment when the corporate media gave up on journalism altogether and surrendered unconditionally to the Right by making the cult of Both Siderism the Beltway's official state religion.

From this moment on, the GOP had the media's guarantee that no matter what whopping great lies they told or what acts of barbarity they might commit right out in the open, the responsibility for those lies and that barbarity would be routinely deflected onto Both Sides or All Sides or All Americans...and thus harmlessly diffused.

From this moment on, the rise of a Republican monster like Donald Trump became inevitable.

Email ThisBlogThis!Share to TwitterShare to FacebookShare to Pinterest
Labels: fournier

I thought you would get a kick from roy edroso's take at alicublog:

"As it stands, his act is like any other NeverTrumper's: to repurpose an aging joke, he and they say they never dreamed the Leopards Eating People's Faces Party would eat anyone's face, and it must be the fault of all the Face-Eating Leopards who inexplicably showed up."

Madrak. I finally get it. Remembering friends.

Evernescence I guess in today's column coalesced some bubble fathoms down and it swelled larger rising reaching least pressure to the surface and popped a ripple crossing my mind.
A nose fizzy out of pressurized carbonation.

Politics is like a see-saw you see on children's playgrounds. In schoolyards and parks.
Except, many fewer now than before. Judging by what I saw with what I see, childhood with retirement.

I think kids got broken bones and leg injuries on see-saws. And there were liabilities. And there were liability legal beagles who howled over their bloody Big Scores biting chunks out of the deep pockets of municipality taxpayers' bonds, howled as Wolf of Wall Street.
[Xtra credit: Who was Wizard of Wall Street? 1910-1918? What was his scam? Were telephones involved? ref.: Mineral Exploits and wikipedia finds grandson Tom in Westernworld where I was born.]

Remember see-saws? Riders have to be in the same class. 6th-graders are too big to ride opposite ungrown 1st-graders.

In analogy with politics, it is like one party is massively criminal fat cats sat bog down on the low end holding up high in the air the less bombastic other party playing nice of civil decency.

Attorney beholding the whole 'he sees'--'he says,' see-saw being that is politics, is taught in Mouthpiece 101 that when you are criminal you argue the facts, when you are immoral you argue the law. (Legal and moral people -- as if -- don't so much hire mouthpieces; domestic tranquility hardly spends money for lawyers.)

The see-saw doesn't work and political debate doesn't work when one party is in a different class of persons than the other party.

And when political ends on the same beam, (i.e., self-evident truths), but unjustably unbalanced, therefor fulcrum must move between see and saw. Fulcrum is media's move.

US Government in 'emergency' declared since Nine-Eleven Op now therefor Supreme Court prohibited to sit without quorum of 6.

So 'What if...' politics picket lines moved 4 Justices to march in

This was the moment when Conservatism's long war against the "Liberal" media achieved final victory.

I read that sentence and I think of arguably the most chilling penultimate sentence of a novel in the English language (albeit more arguably than Kolibri was the finest hummingbird-based shooter on the Sega 32X):

"He had won the victory over himself."

Thinking of it made me realize, in turn, how its impact had been blunted in my mind by the four words that follow it, and which end the novel in question. Because, after all, to win the victory over yourself is also to defeat yourself, no matter that your body then finishes its Victory Gin and smokes another Victory Cigarette before going back to Victory Mansions to put itself in a bed.